How do you explain that Daddy is a political prisoner far away in Russia? 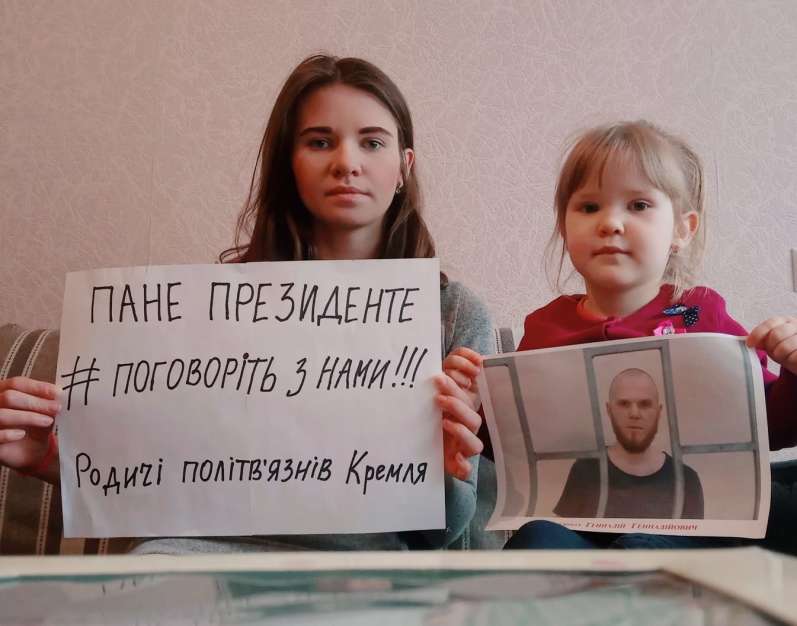 Almost 200 children, most from Crimean Tatar families, are growing up without their political prisoner fathers in occupied Crimea.   For some the pain of separation is combined with the trauma of having seen their fathers forced to the ground by masked men with rifles. Others are too small to remember or were born after their fathers’ arrest.  Understanding that their fathers are in prison for their civic activism or for their faith doesn’t bring them home, but the children do know just how much they are loved and missed.  They are also helped by the Bizim Balalar (Our Children) and  Crimean Childhood civic initiatives and by members of the Crimean Tatar community.

The situation is very different for those Ukrainian political prisoners whose families are in mainland Ukraine and whose children are too young to understand why their fathers are not with them.  The smallest of these little ones is Anya,  the daughter of Hennady Lymeshko, who was just seven months old when her father was seized by the Russian FSB in August 2017.  Iryna Mykhailova-Lymeshko needed to fight hard to get her husband placed on the exchange list, and had to also decide what to tell their daughter.  Lymeshko received an 8-year sentence, and Russia is showing no willingness to release any more political prisoners.  She can’t tell her now that her father is abroad working, if one day Anya will be old enough to understand and ask why her mother lied to her.  For now, the toddler knows only that Daddy is being held by some nasty people and can’t come home.

There remain unanswered questions about the disappearance and seizure of Lymeshko in occupied Crimea, but enough is known to recognize all the ominous features of the FSB’s concocted ‘Ukrainian saboteur’ trials. These include the use of torture to obtain supposed ‘confessions’ to crimes which then prove very different from the charges used to ‘convict’ and sentence them.

Lymeshko would have seemed something of ‘a trophy’ for the FSB, since the then 25-year-old had not only recently been defending Ukraine in Donbas, but had been part of the Eighth Right Sector Volunteer Battalion ‘Aratta’.  Russia has systematically demonized the Ukrainian nationalist ‘Right Sector’ and has already imprisoned several Ukrainians in Russia for their involvement in this movement which is entirely legal in Ukraine.  Iryna explains that she and Lymeshko met in 2016 when she was a second-year medical student, and arrived during the university holidays to serve as a paramedic.

Lymeshko was serving on contract, but resigned after the couple’s daughter was born.  According to Iryna, her husband was offered work in Crimea and decided to go.  She was strongly against this, rightly understanding the danger he would be in as a former soldier in Donbas.  Unfortunately, her husband didn’t listen, and said that she was just being pessimistic.

Lymeshko was seized on 12 August 2017 in Sudak (occupied Crimea).  Although at the time, Iryna learned of her husband’s arrest from television, she has since discovered details about his seizure in broad daylight by some athletic young men in balaclavas who said that they knew who he was and where he had served in the Army. He was taken to a basement, seemingly in the building that housed Ukraine’s Security Service [SBU], and which is now occupied by the FSB.  His captors proceeded to torture him through electric shocks and beatings, and also threatened reprisals against his family.   From the basement, he was taken to the place where they staged and videoed his supposed arrest.

The FSB reported Lymeshko’s arrest on 15 August, claiming that he had arrived in Crimea on 12 August, and that, through his arrest, they had “prevented several acts of sabotage against infrastructure and vital services in Crimea”  He was supposed to be “an agent of the SBU in the Kherson oblast, sent to Crimea to carry out acts of sabotage. The video performance produced appeared to show Lymeshko being seized by a group of people who used force against him until he asserted that “they told me to cut an electricity post”.   He had allegedly planned to cut this concrete post with a handsaw which was seen lying on the ground near him.

A supposed ‘interrogation’ was shown in which Lymeshko, showing signs of having been beaten, ‘confessed’ to carrying out explosions on the electricity lines between Sudak and Novy Svyet in Crimea for somebody called ‘Andriy’ from the SBU. They also claimed that he was supposed to set fire to forest  in the Sudak – Rybachye – Alushta area and one other act of arson, and to cause a rock avalanche that would block the Sudak – Novyy Svet highway.

The story was nonsensical.  Even if Ukraine’s border guards had turned a blind eye to Lymeshko carrying explosives (as well as a very large handsaw) into occupied Crimea, he had also needed to pass through Russian border control.  Yet three days later, the FSB allegedly found two TNT explosive devices on him, together with a mechanism for detonating them, flammable liquids; and a digital camera (supposedly for the purpose of recording the sabotage in order to report back to his overseers.

A worryingly new element, which the FSB appeared to be coordinating with the Russian proxy ‘Donetsk and Luhansk people’s republics’ [DPR, LPR] was that Lymeshko spoke of plans to also carry out sabotage in ‘DPR’.

Among the many other tell-tale flaws in this case is the fact that, despite the ‘confession’ broadcast on Russian state-controlled TV, Lymeshko ended up charged only with possession of a weapon and the illegal production of explosive devices, with the sabotage plot and SBU conveniently forgotten.

Lymeshko had not had an independent lawyer and it seems likely that he was tricked into pleading guilty on 10 May 2018 at the Sudak City Court, perhaps in exchange for a shorter sentence.  Journalist Anton Naumlyuk, who was in the court, reported that ‘judge’ Yevgeny Rykov considered the fact that Lymeshko has a young daughter to be an extenuating circumstance.  The court, however, found there to be an aggravating factor in the alleged political motive of “hostility to the Russian Federation in connection with reunification (sic) of Crimea” and passed a huge 8-year sentence.  Rykov had spent only 20 minutes in the consulting chamber before issuing a ruling and providing all parties with certified copies, which had probably been prepared in advance.

That sentence was upheld on 24 June 2018 by the Russian-controlled High Court in Crimea.

Iryna, together with little Anya and also Hennady Lymeshko’s parents, are all taking part in the campaign calling on President Volodymyr Zelensky to talk with them about real measures to get Lymeshko and almost 90 other Crimean Tatar and other Ukrainian political prisoners freed.  Publicity of any sort is enormously important.

So too are LETTERS to Hennady Lymeshko, which tell both him and Moscow that he is not forgotten. Letters need to be in Russian, and any political subjects or reference to his case should be avoided. If possible, include an envelope and some thin paper as he may well try to reply.

I wish you good health, strength and patience, and hope that you will soon be freed.  I’m sorry to write so little.  It’s hard for me to write in Russia, but you are not forgotten.

Address (You can write this in Russian or in English)