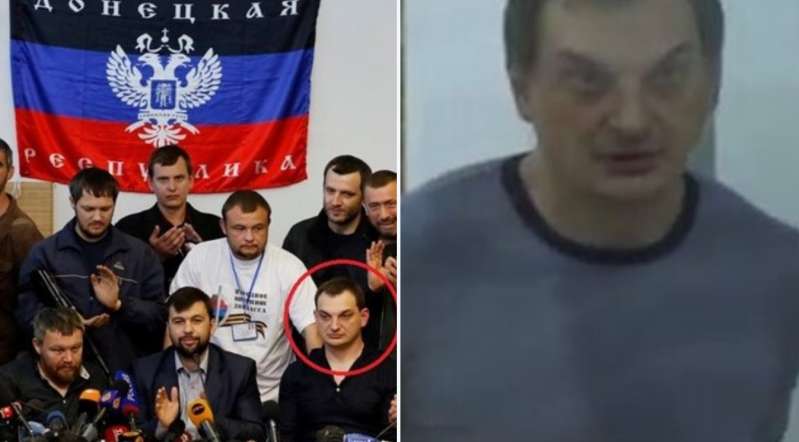 A court in Kyiv has made hearings in the trial of Roman Lyahin closed to the public, with this only one of the disturbing developments in Ukraine’s prosecution of the former ideologue of the so-called ‘Donetsk people’s republic’ [DPR].  Another is the disappearance from the indictment of any mention of Lyahin’s role in the seizure of Izolyatsia, the former arts and cultural centre, which Lyahin and the militants turned into a secret prison, notorious for its torture of hostages.

On 4 May, the Shevchenkivsk District Court in Kyiv allowed an application from Lyahin’s lawyer and agreed to hold the proceedings behind closed doors. Lyahin’s lawyer had asserted that this was needed to ensure the safety of parties in the case.  Proof of this was surely required given the evident public importance of this trial, which has already been postponed six times since its beginning was announced in September 2019.

The indictment is the next problem.  Lyahin is charged with taking part in a terrorist organization (Article 258-3 of Ukraine’s Criminal Code); encroaching upon Ukraine’s territorial integrity (Article 110 § 2) and treason (Article 111 § 1).  There were initially two separate prosecutions, but the court combined them on 17 April.

Volodymyr Yefymenko, the lawyer representing the Izolyatsia Foundation, asked for the Foundation to receive victim status (as an aggrieved party) since Lyahin had taken part in organizing the seizure of the Izolyatsia Centre.  The court rejected the application, saying it saw no legal grounds for this since the indictment does not include charges over the seizure.  The Foundation plans to appeal the decision and has demanded publication of the original indictment from the prosecutor’s office, which did include the seizure of Izolyatsia.  Back in 2019, they assert, the Foundation was given victim status.

Lyubov Mykhailova, Founder of the Izolyatsia Foundation, has published a fairly damning assessment of President Volodymyr Zelensky’s first year in office. She believes the President does not have a clear strategy for ending the war in Donbas and notes that the only legitimate result, in the public’s eye, of the Office of the President’s dialogue with the aggressor state has been the exchange of prisoners.

Not everything here is clear, however, In December 2019, among the hostages released was Yevhen Brazhnikov, whom other released hostages, such as Stanislav Aseyev, identified as having actively tortured people in the Izolyatsia prison.  How Brazhnikov could have got on the exchange list is unclear, but Mykhailova does believe that Zelensky is playing into Russia’s scenario for destabilizing Ukraine through such actions which arouse outrage among the public.

There was also immense frustration over the April exchange which failed to release many hostages held, and almost certainly tortured, for their pro-Ukrainian position or as soldiers defending Ukraine (details here).  It certainly seems as though Russia, or its proxy ‘republics’, are dictating terms on who gets exchanged, and also making extremely divisive demands (such as the release of suspected Maidan killers and Kharkiv terrorists .

Mykhailova warns that such questionable exchanges provoke militants to commit new crimes.  Why worry if, even if caught, you can be fairly sure of being released in an exchange of prisoners?   It remains to be seen whether this is the case with Brazhnikov who was arrested and is now facing charges over his torture of hostages.

There were concerns back in September last year that Roman Lyahin would escape justice and the huge delay in the trial, and the fact that it is now to be held behind closed doors can only compound fears.

39-year-old Lyahin was captured by Ukraine’s SBU [Security Service] and Prosecutor General’s Office on 14 June 2019.  Unlike many of the original militants, he is Ukrainian, and from Donetsk. One of those who appears to have believed in the ‘Russian World’ myth, he played an active role in the creation of ‘DPR’ and in organizing and running the so-called ‘referendum’ of 11 May 2014 (details here). Like many of the original ideologically-motivated militants, he later came into conflict with the new leaders and was largely pushed aside, however during the first stage he was for some time head of the self-style ‘central election commission’

In early September, former hostages joined with the Izolyatsia Foundation in stressing the major role that Lyahin had played in the violent seizure of the Izolyatsia complex and its transformation into a secret prison of the so-called ‘DPR MGB [ministry of state security]’.  It is worrying that this has been omitted from the charges since the torture and likely killing of Ukrainians in the cells there are in a quite different category from political actions, linked with pseudo-elections, etc., and must not fall under any amnesty.

Former hostages Stanislav Aseyev, Ihor Kozlovsky and Serhiy Zakharov have endorsed an appeal from the Izolyatsia Foundation to President Zelensky expressing their concern that the Prosecutor General’s Office is not acting in the interests of the victims and the prosecutor is helping Lyahin to escape liability for serious crimes against the state.  This, they believe, is demonstrated by the following:

the fact that the trial is being dragged out with six postponements, and judges withdrawing themselves from the case;

the exclusion of the Izolyatsia Foundation, which is acting on behalf of all victims, from the case, despite the fact that the Supreme Court recognized them as being a victim (or aggrieved party);

the fact that the prosecutor’s office is making it impossible to receive access to the material of this important case and help in its investigation;

the lack of openness, with even Ukrainian media having been prevented from attending the hearing on 4 May.

They call on President Zelensky to initiate a review of the material on the basis of which the Izolyatsia Foundation and other victims were stripped of their victim status and of the possibility of following this vital case and helping the investigation.

They demand an adequate response by the middle of May when the detention period for Lyahin is due to end.  This is yet another dividing line, they warn, which would make Ukraine’s defeat in the war with Russia irreversible by blurring the difference between victims and their torturers.