Crimean children taught that Russia didn’t invade Crimea and that Ukraine was an accidentChildren in occupied Crimea and Russia fed lies about the war in Donbas and anti-Ukrainian propagandaPreschool soldiers and children with rifles in occupied Crimea and RussiaPutin’s law aims to educate ‘patriots of Russia’ and eliminate Ukrainian identity in occupied CrimeaPro-Kremlin ‘Ukrainian’ propaganda media created in occupied Crimea as smoke screen for court at the HagueRussia blocks Ukrainian media in occupied Crimea while doctoring own Covid-19 statisticsOutrage as Ukraine’s government closes administrative border with occupied Crimea17-year-old prevented from leaving Russian-occupied Crimea to study in mainland UkraineCrimean Resistance to Russian Aggression and Moscow’s Savage Revenge Russian occupiers of Crimea puts 66-year-old Ukrainian on trial for ‘state treason’Russia uses same fake witnesses in multiple ‘trials’ of Crimean Tatar political prisoners Threats against Crimean political prisoner sentenced to 14 years for pleading innocent Russia imprisons rights activists for ‘terrorism’ & terrorize their children Revenge sentence against Crimean Tatar for refusing to lie in Russian political trialKremlin’s proxy ‘republics’ launch mass ‘Russian Donbas’ propaganda campaign FSB use fake ‘secret witness’ in revenge trial of Crimean Tatar who exposed their methods of getting false testimony PACE finalizes capitulation to Russia, while listing all reasons why this is appeasement Fake ‘Ukrainian fascist’ arrested and charged with working for Russia and its proxy Luhansk ‘republic’ Crimean Tatar political prisoner ‘retried’ until Russia’s FSB got the sentence they wantedApplication practice of Article 110 of the Criminal Code of Ukraine
• Topics / Children’s rights
• Topics / Human Rights Abuses in Russian-occupied Crimea 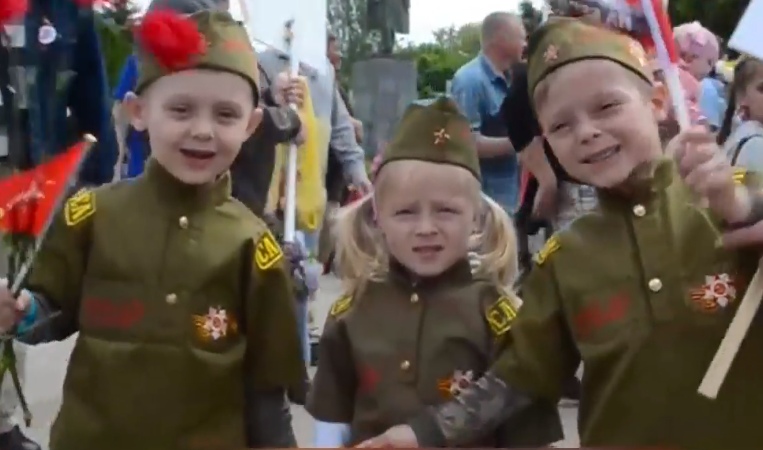 Even physical exercise is on a war footing in Russian-occupied Crimea, with children training to be ‘young soldiers’ like their grandfathers or grandfathers.  While some of the events are specifically linked to the ‘victory fever’ around Victory Day on 9 May, most are representative of the disturbing militarization of childhood that Russia has imposed on Crimea.

Yevhen Leshan, from the Centre for Investigative Journalism, writes that the events around ‘Victory Day’ for schools and kindergartens become more absolute and idiotic each year.  This is linked with the system of military education which is a major and worrying component of Russia’s primary and secondary education.

Human rights groups and journalists have long warned that the situation in occupied Crimea is especially serious, and not only because Russia’s imposition of conscription and attempts to glorify military service on illegally occupied territory are in breach of international law.  Moscow clearly has a second agenda when it comes to Crimea, with this being to destroy Ukrainian identity and indoctrinate children into believing Russia’s lies about Crimea having always been a part of Russia.

A lot of the grotesque sights from 2019 – of children in military uniform, of children’s military parades, etc. – were not seen in 2020 because of the pandemic.  This did not stop schools trying to prove their ‘patriotism’ through all kinds of militaristic activities for children, with parents often expected to carry out this ‘Russian patriotic’ education.

One Crimean kindergarten sent parents a program for each day of the week around Victory Day, with the activities all aimed at making being a soldier something exciting and heroic. A video clip is available for children to train to be ‘young soldiers’, so that they can “be strong and daring like our grandfathers and great-grandfathers”.  Physical exercises are accompanied by a rhyme in which the children chant about holding their arms up around a rifle, and then ‘bang!”.

Parents are also instructed to explain to children about the image of a dove “as symbol of peace and kindergarten children’s happiness”.  There is one word in Russian for dove and for pigeon, which would not be the only mental confusion since a day later, the children are supposed to be told all about how the Nazis were terrified of Soviet military pigeons which were not only used to send messages, but also to destroy the enemy’s sites.

Many of the activities are obviously only nominally linked to the theme of war because the kindergarten management or teachers saw this as required.  Exercises for fingers, for example, are given the name ‘Soldiers’ without any obvious justification, while tanks are used for what seems to be an arithmetical exercise.

This is what teachers of pre-school children came up with to ensure ‘military patriotic education’ during lock down.  It is not known what ‘quarantine’ activities have been thought up for older children, where the level of indoctrination is considerably more aggressive.

The Crimean Human Rights Group has been closely following all such activities in Crimea since Russia’s invasion and have long warned that Russia is committing a war crime through its imposition of conscription on occupied territory.  Indoctrination of children through so-called ‘patriotic education’ is also in flagrant violation of international law. Olha Skrypnyk, the head of CHRG, stresses that this is systematic militarization, which children are being subjected to, both through the education system, and through sport.  One of the clear aims is to encourage children to join the Russian army which is a direct military crime.

The other, more global, aim, she points out, is to destroy Ukrainian identity, so that children stop feeling any ties with Ukrainian culture and consciousness, and view themselves only as citizens of the Russian Federation.

A considerable number of events involving children and young people are linked with the Russian Defence Ministry and its order from 2016 on ‘patriotic education’.  Skrypnyk warns that Crimea has actually become a central part of Russia’s plan for patriotic education.  It is used as the foundation for the myth pushed by Russian President Vladimir Putin and the Kremlin that democratic countries are against Russia, with Ukraine in the forefront of this alleged hostility.

Children have been growing up for the last six years with all kinds of bogey stories about ‘Ukrainian nationalists’, etc.  The most worrying aspect, Skrypnyk stresses, is that all the myths about the so-called ‘Russian world’ are mixed with a cult of violence, weapons and war.  At very many events, children are given the chance to hold weapons, put them together, and so forth.

Olha Kuryshko, a lawyer from CrimeaSOS, notes that it is very hard for parents to fight this.  They receive notification that ‘patriotic education’ lessons are compulsory, and if children do not go, a written explanation needs to be provided.  This is overt and totally illegal pressure on families by an occupation regime, and also a ticking bomb, since the consequences of this ‘patriotic education’ on illegally occupied territory will take some time to become clear.

She believes that Ukraine needs to be more to get children out of this environment, by creating good educational problems and improving access to education in mainland Ukraine.  At present, this is not happening, and even though the number of young Crimeans entering universities in mainland Ukraine is increasing, it is still very small (200-250 per year).

Improvement of access to higher education is undoubtedly important, but will not help if Russia’s indoctrination has already worked at pre-school and school levels. Russia is spending vast amounts of money into turning children into ‘patriots of Crimea’ and trying to instil Russian patriotism.  There is also a huge drive to pull children and young people into the Russian Defence Ministry’s so-called “Yunarmia”, or Youth Army, aimed at glorifying war and instilling a Kremlin-distorted view of historical facts.