KYIV, 8 May 2020 – All parties involved in hostilities in Donetsk and Luhansk regions should make the protection of civilians an absolute priority, said Matilda Bogner, Head of the UN Human Rights Monitoring Mission in Ukraine, noting a sharp increase in the number of civilian casualties in early May. 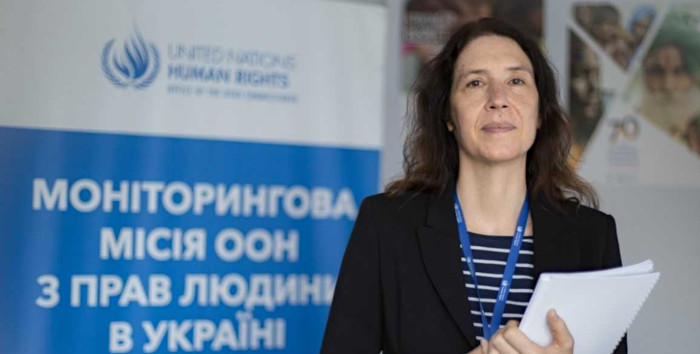 “To a greater extent, my appeal is addressed to the command of the Joint Forces Operation of the Armed Forces of Ukraine, since all new civilian casualties recorded by the Mission in May, occurred in territory controlled by the self-proclaimed ‘republics’,” stressed Bogner. “In absence of a sustainable ceasefire, it is also essential that parties do not place their military positions, weapons and personnel in residential areas,” she added.

“On 7 May, we received reports of eight new civilian casualties caused by light weapons fire in Holubivske (Luhansk region) and Sakhanka (Donetsk region), both controlled by the self-proclaimed ‘republics’. Reportedly, a girl and a boy born in 2006 were among the victims. Our Mission is working to corroborate these reports. If they are confirmed, the number of civilian casualties during the first week of May will have reached nineteen. This will be the highest weekly figure of civilian casualties for the last two years,” said Bogner.

“I am particularly concerned that there are many children among those injured,” she added. If two child injuries in Sakhanka are confirmed, that would bring the total number of civilian casualties among children from 1 January to 7 May 2020 to ten (all in territory controlled by the self-proclaimed ‘republics’): six girls and three boys injured by shelling and light weapons fire, and one boy injured as a result of the handling of an explosive remnant of war.

“It will be important for the next meeting of the Trilateral Contact Group to pay due attention to the current situation,” Bogner noted. “Civilians are not a target, and the responsibility to uphold this principle rests not only with the military, but also with politicians,” she concluded.