How can a Russian oligarch control remembrance of the Victims of Babyn Yar in Ukraine? 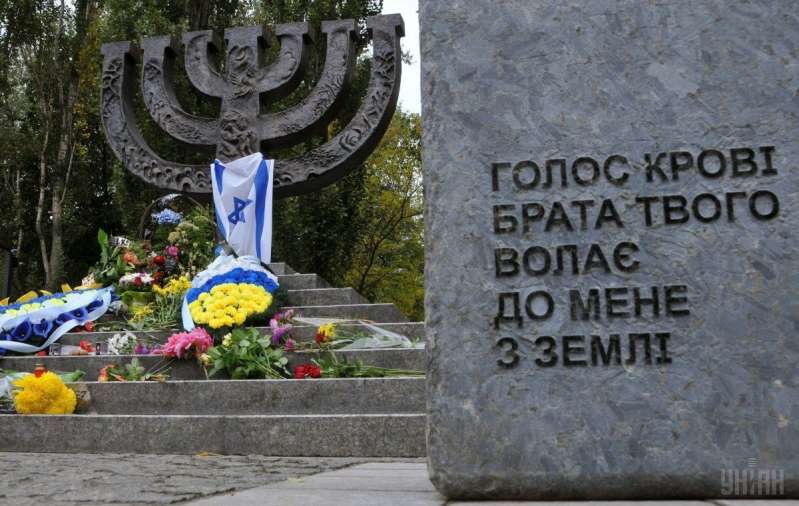 Ukrainian historians, scholars and cultural figures have appealed to Ukraine’s leaders to assume responsibility and control over the creation of a National Memorial complex at Babyn Yar.  Although the issue has been widely discussed of late due to highly controversial plans for the Memorial by Russian filmmaker, Ilya Khrzhanovsky, the problem lies deeper.  Not only is a memorial complex of national and international importance in private hands, but the main financial player is a Russian oligarch seen as close to the Kremlin.  The authors of the appeal are not alone in demanding reaction now at the highest level in Ukraine. .

Babyn Yar was a ravine on the outskirts of Kyiv in 1941 when it became the site of one of the worst massacres by the Nazis during the Holocaust.  On 28 and 29 September 1941, almost 34 thousand Jewish men, women and children were executed on the edge of the ravine.  During the occupation, the Nazis also used the ravine to murder Roma, prisoners of war, Ukrainian nationalists and others.

According to historian Anatoly Podolsky, the Soviet regime had a policy of silence over anything that didn’t fit their narrative about World War II and that included Jewish victims of the Holocaust.  He says that it was only really after Ukraine gained independence, that you could read the truth about the Massacre at Babyn Yar.

Unfortunately the road to proper memorialization of Babyn Yar has been long and fraught.  There had seemed to be some progress in recent years. Josef Zisels, Co-President of the Vaad, or Association of Jewish Organizations and Communities of Ukraine wrote that in 2016, “Ukraine proved herself to be a state and a civil society by marking a day of mourning on the 75th anniversary of the Babyn Yar tragedy. At the time, Ukraine (both authorities and the society, in equal measure) demonstrated that they are capable of a deep evaluation of a tragedy, of giving decent honour to the perished, and of organizing memorial events of international scale.”

Unfortunately, Zisels was writing in 2018 to warn of a situation that was much less positive, and that has now developed into the present scandal. The issue lay in one of three projects – the plans for the creation of a Babyn Yar Memorial Centre (and Holocaust Museum), and the Ukrainian-born Russian businessmen – Mikhail Fridman; Pavel Fuks and German Khan – who initiated and funded them.  Fridman is generally considered to be close to the Kremlin, and given Russia’s aggression against Ukraine, any arrangement whereby he controlled memorialization of Babyn Yar aroused concern from back in 2016.  So too did the proposed construction site, since this is on the land of an old Jewish cemetery, and there is a ban on any construction on it for this reason.

The project did have its supporters in Ukraine, including the Mayor of Kyiv, Vitaly Klitschko.  It also obtained the consent of Karel Berkhoff, a well-known Dutch historian of the Holocaust, to act as consultant historian for the project.

In April 2020, Berkhoff publicly resigned from this position, explaining that he could not continue, given the new plans under Khrzanovsky as artistic director, which had turned the memorial centre he had agreed to help create “on its head”.  In explaining his reasons, Berkhoff repeatedly cited the International Memorial Museums Charter which he believed the new ideas were in conflict with.

This was soon followed by an Open Letter to the Babyn Yar Holocaust Memorial Centre Board Members: “Psychological Experiments and Simulations of Ethical Decisions Have No Place in a Commemoration of Babyn Yar:   The authors, who included historians, writers and academics, pointed to serious concerns, including ethical, over Khrzanovsky’s earlier film DAU, and stated that  his “proposal for the Babyn Yar memorial includes immersive experiences of violence and death through virtual reality (VR) headsets, and ethical dilemmas that force the visitor to identify with the victims, Nazis, or collaborators.”

The authors stressed that such methods were not acceptable for remembrance of the victims of the Holocaust.  They called for Khrzanovsky’s removal and for the reinstatement of the Public Support Council dissolved in November 2019, when Khrzanovsky was made artistic director.

Viacheslav Likhachev, historian and researcher into anti-Semitism and xenophobia in Ukraine, notes that such a situation is possible where there is a “private monopolist, with a controlling packet of shares” – in this case, Fridman.  From an interview with Khrzanovsky, as well as from what the previous team has said, it is clear that this new art director was appointed by Fridman.  Private capital is in control, with the local Kyiv authorities having facilitated a legally dubious deal to have the land transferred for the memorial.  The root of the problem, Likhachev says, is that this is a totally private project, with neither the state, nor the public, having any levers of influence.

There may well be a solution, he believes, since the city authorities are likely implicated in something that can be legally overturned, however this would need the central authorities to get involved.  Likhachev does not think that potential sponsors need be stopped from building something, but any major private initiative must be under State supervision.

He believes that Ukraine could follow the format used in Warsaw to create the Polin Museum of the History of Polish Jews.  This was the first ever public – private partnership, between the government, the local government, and a non-governmental organization.

Many of the above concerns and possible solutions are outlined in the Appeal first published on 12 May.  The authors call on President Volodymyr Zelensky; Prime Minister Denis Shmyhal and his government, as well as Kyiv’s Mayor Klitschko and City Council “to take, in cooperation with civil society, real responsibility and direct control over the creation of a memorial complex at  Babyn Yar.  This will prevent external destructive and manipulative influences.”

There must only be a national memorial complex at Babyn Yar.  The authors stress that such a monstrous crime is no place for private ventures like the current plans which arose in 2016 at the initiative, and with funding from Russian businessmen Mikhail Fridman; Pavel Fuks; and German Khan.  There were doubts about the project from the outset, both because the chosen site for construction includes land from the former Jewish, Kyrylivsk Orthodox and Karaim cemeteries, and because of “unacceptable ideology foisted by the sponsors”.

The concerns and the polemic have now escalated due to the appointment of Khrzanovsky whose proposals for the memorial complex arouse concern among a significant part of the public.  This was accompanied by radical changes in the team and in very public reactions, such as the above-mentioned public withdrawal from the project of Karel Berkhoff.

The authors point out, however, that these are merely symptoms of more fundamental issues, regarding the nature of the memorial at Babyn Yar and what status it should have (public or private).  How should the state, Ukrainian civil society and the academic community influence the creation and functioning of this memorial, and thus bear responsibility for it?

Total dependence of the Memorial on foreign investors means that a private project is entirely controlled by external factors and interests, with the Ukrainian public deprived of any influence.

It is the Ukrainian state and Ukrainian civil society who should decide how to honour the victims of Babyn Yar and how the Memorial should look.  This is not something for foreign investors or private structures.

They call on the President, Cabinet of Ministers and Kyiv authorities to take urgent measures to resolve the situation and affirm public policy on memory.

A Babyn Yar National historical memorial should be designated as the base state institution responsible for implementing the project, with this placed under the Ukrainian Institute for National Remembrance.  The necessary state funding should be allocated from 2021 for implementing the concept framework for memorialization of Babyn Yar, however a fund should also be created for private donations.

A check should be carried out into the legality of the leasing of land to the Babyn Yar Holocaust Memorial Centre, and a moratorium imposed on any new building work at Babyn Yar, the adjoining cemeteries and reserve lands.

“We Ukrainians, as a political nation, bear shared responsibility for preserving the memory of the tragedies that took place on our land. Our ability to cope with the task of memorialization of these sites is a global challenge and modern test of national and political maturity and, at the same time, a test of whether we have freed ourselves of  a post-colonial mentality, an inferiority complex and dependence on other states and groups who try to form this historical memory for us or who foist their own commemorative practice on us.”