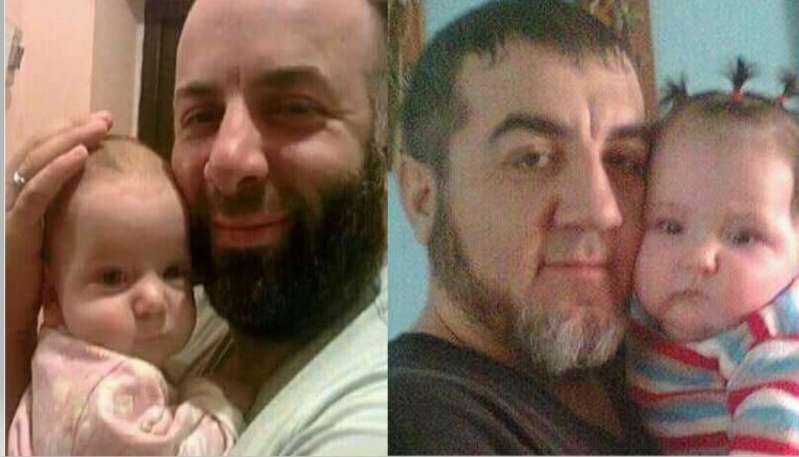 When armed FSB officers burst into the Abdullayev home in Russian-occupied Crimea, Fera Abdullayeva’s 8-year-old daughter asked her if they had come to kill them.  After five hours of terror, the officers took the children’s father, Uzeir Abdullayev, away, together with a Quran and some other religious books – all that their violent and traumatic search had ‘uncovered’.  Uzeir and his brother, Teymur Abdullayev, were among five Crimean Tatars arrested on 12 October 2016 on charges related solely to their faith, and deported to Russian prisons, where they are held to this day.

Fera Abdullayeva is convinced that her husband was arrested because of his active civic position, his refusal to look the other way when the armed searches and arrests began.  This was our shared misfortunate, he had insisted.  It’s generally thought, Fera says, that “if a person is active,  he’ll definitely be imprisoned”. Since then, forty Crimean Tatars have been imprisoned on identical charges, with most of them civic journalists and / or activists.

Uzeir and Teymur are the grandsons of a well-known linguist and member of the Azerbaijan Academy of Sciences.  Their mother, a doctor, brought them up alone, after their father died when they were very young.  Both men trained as lawyers, however became professionally involved in martial arts (taekwondo, judo and karate) with Uzeir both Ukrainian and European champion in taekwondo.  The brothers were working as trainers in Simferopol, and, before annexation, had even trained law enforcement officers, many of whom changed sides after Russia’s invasion. Some of these men took part in the arrests or as convoy guards, and one young man came up to Zera Abdullayeva, acknowledged that the charges against her husband were false, that Uzeir was a good man, but that “this is my job”.

Their arrest was the fourth ‘operation’ under Russian occupation in which masked men, most in military gear and brandishing machine guns, burst into homes where young children were fast asleep, forced their fathers to the floor and took them away in handcuffs.  The ‘searches’ in literally all 65 cases have found nothing but religious books.

The FSB were not, in fact, ever looking for anything else since neither the Abdullayev brothers nor three other men from Stroganovka: Emil Dzemadenov; Rustem Ismailov and Aider Saledinov were accused of any recognizable crime.  The charges against the five men were merely of ‘involvement’ in Hizb ut-Tahrir, a peaceful Muslim organization which is legal in Ukraine and which has never committed any acts of terrorism anywhere in the world.  Russia’s Supreme Court ruling in 2003, declaring Hizb ut-Tahrir ‘terrorist’, was almost certainly taken to enable Russia to deport Muslims back to Uzbekistan where they faced religious persecution.

Russia brought such prosecutions to occupied Crimea in January 2015, and has increasingly used them as part of its efforts to claim a terrorist threat as justification for its annexation of Crimea, and as a weapon against members of the Crimean Tatar human rights movement, especially the civic initiative Crimean Solidarity.  Since all of the men arrested on such charges are law-abiding members of the community, Russian and Russian-controlled propaganda channels often use fake video footage in reporting such arrests.

The International Criminal Court’s Office of the Prosecutor determined back in 2016 that Russia’s occupation of Crimea constitutes an international armed conflict.  Neither ICC, nor any other international body is in any doubt that Russia is an occupying power. As such, it must abide by the Geneva Convention relative to the Protection of Civilian Persons in Time of War which expressly prohibits occupying powers from carrying out “individual or mass forced transfers” or from imposing its legislation on the occupied territory.

The prosecutions are also persecution on religious grounds, and make a travesty of the justice system.  The charges are backed solely by highly dubious ‘expert assessments’ given by FSB-loyal academics, who claim, for example, that a particular word or utterance indicates involvement in Hizb ut-Tahrir, as well as by ‘secret witnesses’.  These are individuals whose identity is concealed from the defence and whose testimony, which often seems scripted to echo the indictment, cannot be verified.  Despite countless occasions where cross-examination of such ‘witnesses’ has demonstrated that the men were lying, the Southern District Military Court in Rostov (Russia) invariably finds the men ‘guilty’ and passes huge sentences.

In all such cases, the FSB designates at least one person as the ‘organizer’ of a Hizb ut-Tahrir group (under Article 205.5 § 1 of the Russian criminal code), while the others are changed with ‘involvement’ in the ‘cell’ (Article 205.5 § 2) . There is no obvious reason for such differences in the charges, but the difference in sentence is massive.  On 18 June 2019, 44-year-old Teymur Abdullayev was sentenced to 17 years’  Uzeir Abdullayev (45) was sentenced to 13 years; Rustem Ismailov (35) – 14 years; and Emil Dzemadenov (39) and Aider Saledinov (33) to 12 years. Three of the lower sentences were actually one year higher than those asked for by the prosecutor.  Two of the three judges in this case, Anatoly Kolesnik (presiding judge); Igor Kostin and Edward Korobenko, had already taken part in at least one other such ‘trial’ .

On 24 December 2019, Russia’s Supreme Court made virtually no pretence of considering the appeal and upheld the men’s convictions, merely reducing each sentence by six months.

All of the men are imprisoned in Russia, thousands of kilometres from their families and homes.  Nine children are growing up without their fathers, and Dilyara Abdullayeva has had both her sons taken from her.