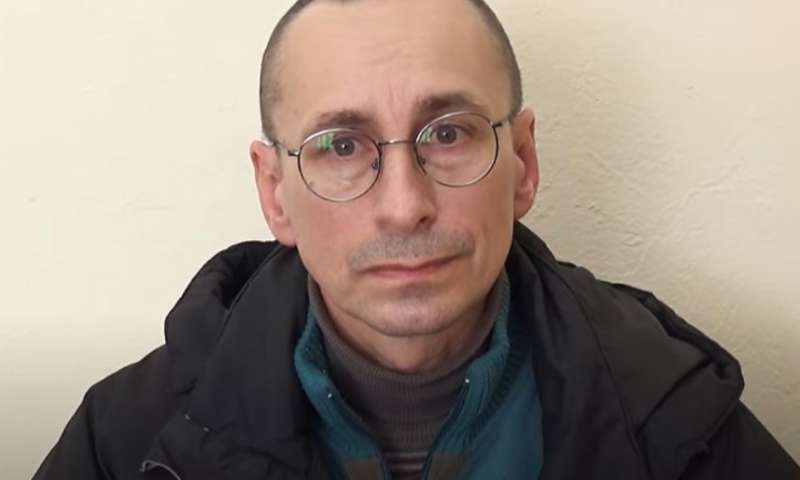 The Russian proxy ‘Donetsk people’s republic’ [DPR] has ‘sentenced’ a 55-year-old neuropathologist to 13 years’ maximum security imprisonment for posts on Twitter which were claimed to “destabilize the situation” in the unrecognized ‘republic’.  Yuri Shapovalov has been imprisoned for over two years, and was for at least some of this time held in the notorious Izolyatsia secret prison which former hostages review to as a ‘concentration camp’.  It was only from the testimony of two  journalists released in the December exchange, Stanislav Aseyev and Oleh Halaziuk, that his whereabouts were known after the original militant report and videoed ‘confession’ in March 2018.  The secrecy in this case is deeply disturbing since Shapovalov was clearly seized months before his ‘arrest’ was announced, and he was also ‘sentenced’ a month ago, on 16 April 2020, although this was only reported by the so-called ‘DPR ministry of state security’ on 15 May. Shapovalov’s imprisonment for tweets is also chilling.  Although his Twitter account was clearly hijacked by the militants following his seizure, the tweets from before January 2018 can still be seen here at Залишенець Донецький @relictDon.  They show a person with clear pro-Ukrainian views and a deep antagonism to ‘Russian world’ ideology and the devastating impact this has had on Donetsk.

On the basis of his activities on Twitter, the militants claim, however, that Shapovalov “gathered, analysed, published and passed on to the  Ukrainian Security Service nformation damaging to DPR security”.  The report, copy-pasted from 7 March 2018, says that Shapovalov ran an account on Twitter, “posted information, facilitating the destabilization of the socio-political situation in the republic”, as well as data about the location of military objects, movement of military technology and personnel.  It claims that in the summer of 2015, Shapovalov established contact with the SBU and was then recruited.

In the video posted on 7 March 2018, Shapovalov essentially repeats the assertions about the posting of information about military movements on Twitter.  He begins by calling himself a citizen of Ukraine and saying that he considers himself a Ukrainian patriot. According to him, after having posted a photo of a military vehicle on Twitter, he was contacted by Stop Terror, which he says is “an organization connected with the Security Service”, and that initially they asked for more photos from the same site so that they could geolocate it.  This he did, and then later reacted as he could when asked for his “assessment of the military and psychological and social situation in the Donetsk oblast”.

All of this, he says, he continued to do until January 2018 when he was seized by the ‘DPR ministry’.  The video is thus at very least two months after he was taken prisoner.  In that part of the video, Shapovalov does not appear to be reading a script, as is most often the case with such entirely illegal ‘videoed confessions’.   While he states that Stop Terror is an organization linked to the SBU, this is very far from the ordinary ‘confession’ given by hostages in which they talk of direct links with the SBU, etc.   The screen, however, suddenly changes, and in the following part, where he tells people in occupied Donbas not to do what he did and post pro-Ukrainian material and information, he is very obviously repeating what the militants demand that he says.  .

As with all such videos, Shapovalov was totally under the control of the illegal armed groups who had already been holding him imprisoned for over two months.  There is every reason to assume that the methods used to force him to say certain things and not others included torture.  Any ‘confession’ should therefore be viewed with caution.

That said, it is noticeable that the militants have not even tried to conjure up ‘offences’ that could warrant ‘spying charges’ and a 13-year sentence in a maximum security prison.  This was the ‘sentence’ passed by the so-called appeal chamber of the DPR supreme court on 16 April 2020, and only reported a month later. It is not clear whether that was an appeal against the original ‘sentence’, and there is nothing to indicate whether Shapovalov even had a lawyer.