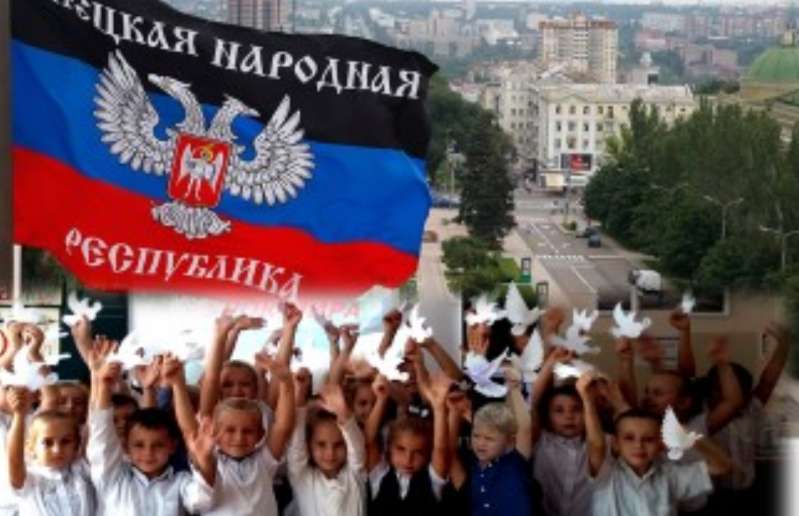 Russia is effectively deploying very young children for its aggression against Ukraine in Donbas, and this is not (only) about military games and competitions. Through systematic militarization and indoctrination, children at preschool and school level are being taught that they should love and defend Russian proxy Donbas ‘republics’ and that Ukraine is essentially the enemy.  The danger this poses cannot be overstated.  Six  years is a long time for children, many of whom will simply not remember a time before the ‘republics’.  This means that all of the glorification of their own ‘fighters’, all the anti-Ukrainian narrative go unchallenged.  With the media controlled by the militants, there is no way for them to understand that they are being fed lies, and  even if their parents do know, like in Soviet times, they may well feel it is not safe for them to tell their children the truth.

Although Moscow continues to deny its pivotal role in the conflict in Donbas and its control over the self-proclaimed ‘Donetsk and Luhansk people’s republics’ [DPR/LPR],  the methods of indoctrination and the ‘military-patriotic’ activities are essentially identical to those used in occupied Crimea and in Russia.

According to Vera Yastrebova, Head of the Eastern Human Rights Group, Russia is spending millions of dollars on various projects aimed at inculcating ‘Russian World’ ideology and raising a generation of Ukrainians who essentially hate Ukraine.  She warns that when Ukraine regains control over Donbas, all of these people will become a pro-Russian electorate.  This, and the resulting destabilization of Ukraine, are very clearly, Moscow’s aim.

At the beginning of the school year in September 2019, all children in ‘DPR’ had the same ‘First Lesson’, entitled “DPR is five years old.  We are growing with the republic!”  You can find many ‘lesson plans’ on the Internet, for small children, with all of them concentrating on getting children to identify as ‘patriots’ and ‘citizens’ of a self-styled and unrecognized ‘republic’.

There is huge emphasis on the Soviet victory in World War II which, like in Russia, is now again called the ‘Great Patriotic War’.  Schools in occupied Donbas all had ceremonies and other activities marking 23 February which, like in Russia, is treated as Day of the Defender of the Fatherland.   While the small children marching with a placard reading “To Berlin” may have been told that they were remembering the war of their great-grandfathers, older children were clearly being fed the idea that fighting in the so-called ‘people’s militia’ (the militant ‘army’) is noble and is about defending the Homeland.

It should be recalled just who these fighters were that children are being taught to treat as heroes.  They almost certainly include Arsen Pavlov or ‘Motorola’, a Russian mercenary who openly boasted of killing prisoners of war in cold blood and was wanted by Ukraine for those and other war crimes.  In ‘LPR’, children will glorify Alexei Mozgovoy, although even an ‘LPR court’ was recently forced to acknowledge that Mozgovoy had tricked his fighters into gunning down a family in order to steal the money he knew them to be carrying.

All of the propaganda that the children are hearing, all of the militaristic activities in the countless ‘military-patriotic’ clubs and other organizations are about fighting Ukraine.

Both the Eastern Human Rights Group and Vostok SOS have long warned of the danger all of this presents.  Vostok SOS points out that under the guise of ‘military-patriotic education’, children and young adults are being indoctrinated with anti-Ukrainian propaganda, and given a totally distorted view of reality in which Russia is the great friend of heroic ‘republics’ fighting a ‘civil war’ against Kyiv.

Many of the extra-curricular activities, such as ‘military-patriotic’ camps, ‘youth parliaments’, etc. are virtually identical to those in Russia, and there is strong emphasis on cooperation between Russian and Donbas groups.

The most menacing of these is the ‘Young Guard – Yunarmia’, which, for all the slight difference in name, seems to be the same as Russia’s Yunarmia or Youth Army.  On 29 March 2019, in announcing the creation of such a ‘youth army’ in DPR, Edward Basurin, deputy head of the ‘people’s militia’ [fighters], asserted that “it is important to not only bring youth up even more patriotically, but to fight against the falsification of history which the mendacious Kyiv authorities are currently involved in”.

He claimed that “the military” are regularly asked by locals to create “a single centre for bringing up the new generation in military-patriotic traditions”.  This ‘Youth Army’, he asserted, would  “include both physical and intellectual development, and also form correct life views in the broad sense of the word”.

‘LPR’ has reported that their ‘Yunarmia’ now has one thousand members, and the ‘DPR’ equivalent is likely to be the same.  These children and young people swear allegiance to the unrecognized ‘republics’ and take part in all kinds of militaristic activities.  Just as in Russia and occupied Crimea, one of the aims is very clearly to glorify the military and encourage children to want to join it.

Pavlo Lysiansky, Representative in Donbas for Ukraine’s Human Rights Ombudsperson, also predicts that for the first 15 years after Donbas returns under Ukrainian government control, there is likely to be a pro-Russian population still influenced by all of this propaganda.   We weren’t ready for war, he points out, but we survived, and we will cope with this as well, however we should be preparing in advance, he stresses.  One method is simply to increase the level of political awareness of Ukrainian citizens.  “We are not fighters, we can’t throw people behind bars for thinking differently, or watching other television channels.  We need to show these people what human rights are, what democracy and civic society are.”  Yes, Russia is spending vast amounts of money on inculcating its ideology, but Ukraine can take the example of post-War Germany which invested money and efforts in the political education of its population so that the horrors of Nazism were never repeated.

Psychologist Valentin Kim warns that children are extremely susceptible to influences and that there will certainly be huge problems in integrating kids who have undergone such ideological indoctrination.  He points out that they have been growing up in an unrecognized entity, with the world beyond its borders being viewed as hostile.  They are likely to be less trusting, but also better prepared for ideological battles and arguing that position which was foisted on them for so long.  Kim notes that in government-controlled Ukraine, children simply learn to live in an open world, without fixed ideology as such.  He believes that the vast majority would not be ready to hold discussions on geopolitics or the war in Donbas, and therefore, confronted by peers brought up in occupied Donbas are likely to be out of their depth and seem to lose the argument.

Changing ideology is a difficult and lengthy process, but it can and must be prepared for intelligently and systematically, with the proper socio-pedagogical infrastructure.  One important point is that children should not be left to communicate only with kids from the same background.  Lumped together as ‘Donbas kids’, they will inevitably view themselves as different, with this only strengthening their ideological separatism. The good side of things is that, unlike adults, kids are much more flexible and able to change their attitudes.

It is not without cause that human rights groups are warning that this is an issue of national security.  The warnings should be heeded.