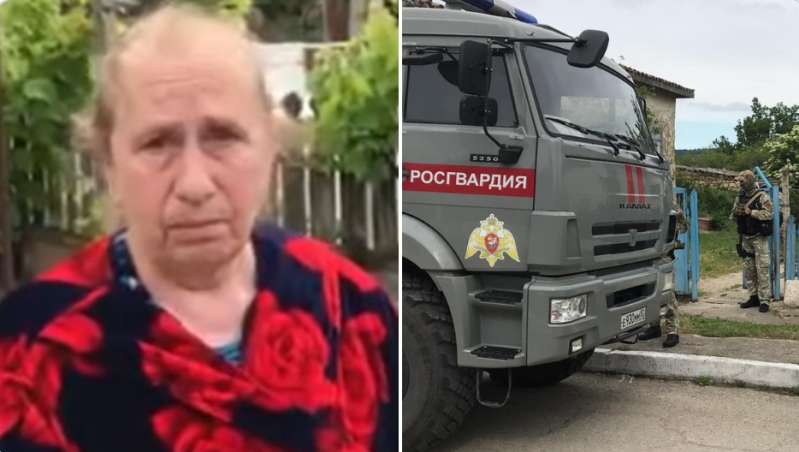 Russia’s FSB knew very well that Rustem Asanov is not living in Crimea and their armed search of his mother’s home on 2 June 2020 had no purpose except to terrorize.  A Rosgvardia truck, with a number of FSB officers and Rosgvardia fighters in full military gear turned up at the house in Belogorsk where 65-year-old Sheyde Asanova lives at around 8 a.m.   They claimed to be looking for weapons, symbols of the Noman Çelebicihan (or Asker) Battalion or other documents linked with the illegal criminal charges that they have initiated against her son.  As was to be expected, they found nothing.

In the many politically-motivated trials and sentences against Crimean Tatars over alleged involved in the Noman Çelebicihan  Battalion, the Russian FSB claim that this is “an unlawful armed formation, acting on the territory of a foreign country for purposes which are against the interests of the Russian Federation”.

The Battalion is certainly opposed to Russia’s invasion and annexation of Crimea, which the current regime could consider “against its interests”.  Wanting an end to Russia’s occupation of Crimea does not make the battalion illegal and the claim that it is an armed formation is simply false. The battalion was formed on 1 January 2016 from people who had taken part in the essentially peaceful civic blockade of Crimea from 20 September 2015. It remains a relatively small formation whose role at present is merely to back the Ukrainian border guards in areas near the administrative border with occupied Crimea.

Although it is likely that Asanov himself is facing criminal charges over alleged involved in the Battalion, the Grati journalist initiative reports that the search was linked to a criminal investigation against the Battalion’s founder, Lenur Islyamov.  He is being ‘tried’ in absentia in the Russian-controlled Crimean Hight Court on charges of ‘creating an illegal armed formation’ (Article 208 §1 of Russia’s criminal code); ‘sabotage’ (281 § 2 a, b )  and ‘calls to separatism’ (280.1 § 2).  The latter is presumably how Russia is describing opposition to its internationally condemned annexation of Ukrainian Crimea.  Islyamov is represented by Alexei Ladin, a Russian lawyer who has defended many of Russia’s Ukrainian political prisoners.

Islyamov has long indicated that the Noman Çelebicihan Battalion is a Crimean formation, not only Crimean Tatar. While they would be willing to serve in the Armed Forces in the area of conflict in Donbas, the steps needed to formalize such service have yet to be taken.

Russia has already sentenced at least three Crimean Tatars to long terms of imprisonment and is holding another man in detention despite the lack of any evidence of involvement in the Battalion and the latter’s entirely legal status in Ukraine, It has also brought a number of similar charges against other Crimean Tatars in absentia, including a TV ATR journalist Gulsum Halilova, who merely provided coverage of the first months of the Battalion’s existence.

Russia announced the arrest of a 24-year-old Crimean Tatar in March 2018.  Even his name Fevzi Sahandzhy only became clear on 25 January 2019 when he was sentenced to 10.5 years on charges of involvement in the Battalion.  Sahandzhy’s allegations of torture and the absurdity of the charges were ignored by both first level ‘court’ and then, on 14 May 2019, by a panel of ‘judges’, led by Oleg Lebed, from the Russian-controlled Crimean High Court.

Sahandzhy asserted in court that he had been seized by FSB officers in October 2017 and that they had forced him, under torture, to sign various documents.

On13 June 2019, the Russian-controlled Kirov District Court sentenced Edem Kadyrov to four years’ imprisonment and a further year of restricted liberty, also for supposed involvement in the Battalion. Virtually nothing is known about Kadyrov, except that he is 25 and that Russia claims that he too was Islyamov’s personal guard, which Islamov denies.

The same Kirov District Court appears to be involved in all of these flawed prosecutions. On 28 August 2019 it sentenced 22-year-old Dilyaver Gafarov to 10 years in a maximum security prison on the same unproven charge of involvement in a legal formation.  The de facto prosecutor claimed that Gafarov was part of a group of reconnaissance agents and that he was Islyamov’s personal guard.   Gafarov denied any such involvement in the Battalion (details here).

Then on 17 February 2020, the FSB in Sevastopol showed a video of their arrest of another Crimean Tatar on such charges.  Although the FSB gave virtually no information, it is understood that this was 55-year-old Nariman Nezhmudinov.

One of the main objectives of these arrests is their propaganda value with Russian and Russian-controlled media claiming, for example, that “The FSB in Crimea have detained a Ukrainian national battalion fighter” and showing the FSB in full military gear bursting into the latest victim’s home, and forcing him to the ground.  The FSB presumably hope that their audience will not notice that this latest victim was evidently not a young man and was forced to sign their documents at a table with numerous packages of medication, before being taken away.