Family on trial without any crime in Russian-occupied Crimea 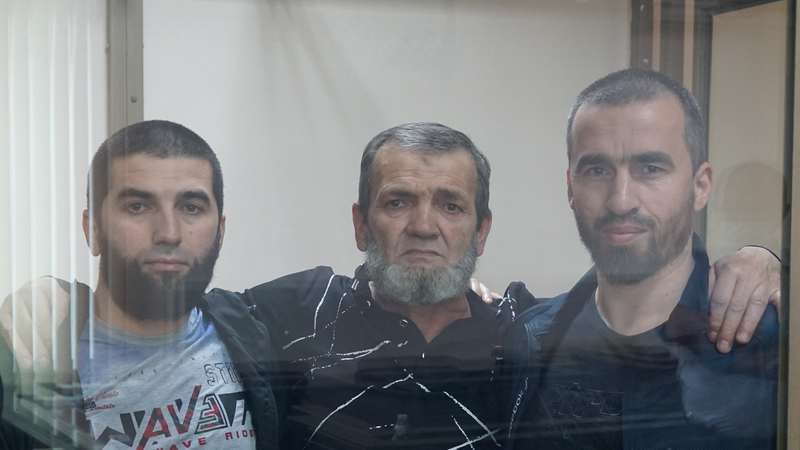 After sentencing one member of a Crimean Tatar family to thirteen and a half years’ imprisonment without any crime, Russia has now fast-tracked the ‘trial’ of the other two men in the family, including 59-year-old grandfather Enver Omerov.  Not only are the charges unclear, but it is not even stipulated in the indictment when the alleged activities are supposed to have taken place.  There is literally nothing in the charges against the men that would constitute a punishable offence in any democratic country, yet Enver Omerov, his 32-year-old son Riza Omerov and Aider Dzhapparov (39) have been imprisoned for a year and are facing sentences of up to 20 years or more.

All three men stated in court that they consider the charges politically-motivated, and protested that they were being prosecuted under Russian law.  While all three men do have Russian citizenship, this is because Russia, as occupying state, has made it effectively impossible, especially for people with children, to not take Russian passports.  In his reaction to the charges, Dzhapparov noted the prosecution’s manipulation of this issue.  The men are being tried under Russian legislation for unproven ‘involvement’ in an organization which is totally legal in Ukraine.  Yet when it comes to their detention, the prosecutor insists that they must remain in custody because they are Ukrainian citizens “and could abscond”.

Dzhapparov also stated that they had been told many times that they were imprisoned because they had attended the court hearings in similar ‘trials’.  It has been clear for at least the last three years that Russia’s FSB targets civic activists and journalists who show support for victims of persecution and their families, and who circulate information about armed searches, arrests and ‘trials’.

Dzhapparov added that their ‘case’ was one of the quickest to have reached the court and said that the investigators had told them that an order had come from above to not draw this case out.  It is not clear what the reason is, although the brutality shown by the FSB in targeting a whole family, arresting a father, his son and his only son-in-law, Rustem Ismailov, hardly improves the reputation of either the FSB or Russia as occupying state..

Russia has developed a conveyor belt of repression with its so-called ‘Hizb ut-Tahrir prosecutions’, imprisoning men for decades on the basis of a secretive and probably politically-motivated Supreme Court ruling in 2003 which declared this peaceful pan-Islamist organization ‘terrorist’.  Hizb ut-Tahrir is not known to have committed any act of terrorism anywhere in the world, and Russia is the only country in the world to have called ii terrorist.  Yet that unwarranted label has been used since early 2015 to imprison law-abiding and devout Crimean Muslims on ‘terrorism charges’.

In rejecting the charges against them, Enver Omerov told the court that the case was totally fabricated. They need only ask people who have any contact with them what kind of people they are. He expressed huge gratitude to the Crimean Tatar community for supporting their families, and noted that “you don’t support terrorists”.

Ominously, Dzhapparov reported that people within his religious community have received phone calls threatening that they will be the next to face arrest and imprisonment if they speak out in defence of the men.

This is not the first report of such threats and it is cheering that in many of the ‘trials’ of Crimean Tatars, witnesses have, nonetheless, spoken out in the men’s defence, including a number who were summoned as supposed prosecution witnesses.

The trial is taking place at the same Southern District Military Court in Rostov-on-Don where most political trials of Ukrainians have taken place over the last six years. This time, the presiding judge is Roman Saprunov, together with Rizvan Zubairov and Maxim Nikitin.  The prosecutor is Zaurbek Savoyev.

Enver Omerov was arrested at around 2 a.m. in the night from 9-10 June 2019 while travelling to Rostov with his daughter, Fatma Ismailova, for the latest court hearing in the trial of his son-in-law, Rustem Ismailov.  Omerov  became very unwell and the ambulance brigade confirmed that he had extremely high blood pressure and needed to rest.  The enforcement officers ignored this and insisted that he come with them to the Kerch police station.  When Fatma remonstrated, and said that she would bring her father there after he had rested, an FSB officer threatened to handcuff her to the generator if she didn’t stop “getting in their way”.

Armed searches were carried out early on 10 June in a large number of homes, with Risa Omerov;  Aider Dzhapparov, and also Eskender Suleymanov from Belogorsk, and four men from Alushta: 39-year-old Eldar Kantemirov; 52-year-old Lenur Khalilov; 54-year-old Ruslan Mesutov and Ruslan Nagaev(55) all arrested and taken away.  All the men remain imprisoned, although Suleymanov has become the 25th Crimean Tatar in Russia’s most notorious attack on activists and journalists from the civic initiative Crimean Solidarity, and the four men from Alushta are also being tried separately.

These ‘trials’, which are known to provide the FSB with promotion or bonuses, all follow a certain pattern, with the FSB relentless in seeking huge sentences against those whom they designate as ‘organizers of a Hizb ut-Tahrir cell’.  The reasons for designating one or more defendants ‘organizers’ (under Article 205.5 § 1 of Russia’s criminal code) and others merely of ‘involvement’ (Article 205.5 § 2)  appears quite arbitrary, however the difference in sentences is massive.  In this case, Enver Omerov has been labelled ‘organizer’ and faces a sentence of up to 20-25 years, while the others face 10-20 year sentences..

Memorial HRC considers all those convicted merely of such involvement in Hizb ut-Tahrir to be political prisoners.  It has also repeatedly noted, as have Ukrainian and international NGOs, that Russia is breaching international law which expressly prohibits an occupying state from applying its own legislation on occupied territory.

The next hearing is scheduled for 22 June.