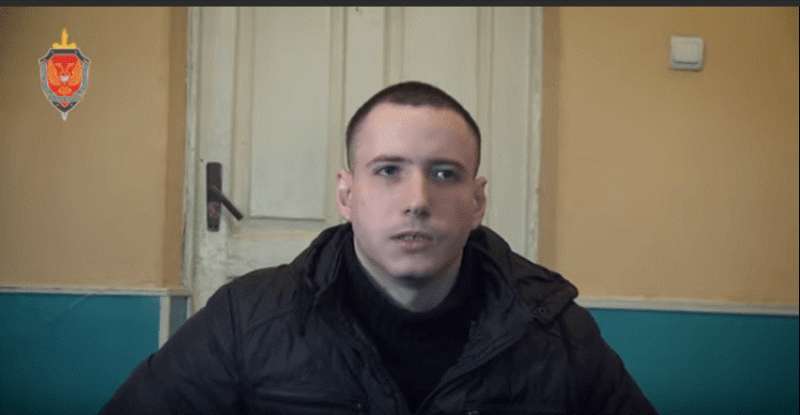 Yet another Ukrainian has been ‘sentenced’ in the self-proclaimed ‘Donetsk people’s republic’ [DPR] to 14 years’ harsh regime imprisonment for communicating on Twitter.  Virtually all that is known about 31-year-old Pavlo Podvezko comes from a videoed ‘confession’ which he has almost certainly been tortured into reading aloud.  Although the so-called ‘DPR ministry of state security’ use the standard claims about working for Ukraine’s Security Service [SBU], it is interesting that the ‘charges’ against Podvezko involve his alleged communications with a Twitter user whom both Russia and its proxy ‘republics’ do have cause to hate.  Necro Mancer @666_mancer is one of the citizen journalists who has provided invaluable information about Russian military and pro-Russian losses in occupied Donbas; military movements, etc.   He seemingly lives in Donetsk and began documenting the military movements and military losses that Russia has tried very hard to conceal from the events of April 2014.  It was then that, having failed to stir up local uprisings, Russia sent in ‘former’ FSB officer Igor Girkin and around 50 heavily armed men who seized control of Sloviansk in the Donetsk oblast on 12 April.

In their ‘prosecution’ of Podvezko, the DPR militants claim that Necro Mancer works for the SBU and that Podvezko passed him information.  In this report, as in others, the  ‘DPR ministry of state security’ appears to be informing that it has arrested Podvezko, however later in the text, it transpires that he has already been ‘sentenced’ to 14 years.  There is nothing to indicate whether he ever had a lawyer, and how long he was held in militant control before his ‘confession’.

Podvezko is reportedly from Kharkiv, however ‘ministry’ identifies him as a resident of occupied Makiyivka, born in 1988.

In their methods of persecution, as in just about everything else, ‘DPR’ closely follows Russia, with is ‘security service’, like the FSB, spending a lot of time scouring the Internet for ‘enemies’.  Here they assert that “in the course of monitoring the Internet in order to uncover indications of unlawful behaviour, a Twitter account, registered in September 2014 with information of an extremist natures, came to the attention of the DPR ministry of state security.”

Via so-called ‘search operations and investigative measures’ they ascertained that the account belonged to Podvezko. They also claim that, from the summer of 2015, he corresponded with Necro Mancer who, they allege, works with the SBU, and that Podvezko voluntarily passed him information about the movement of military technology of the so-called ‘people’s military’ [their fighters], “of DPR government cortege, as well as information about the positioning of military units and the numbers of their patrols”.

During the videoed ‘confession’, Podvezko said that he had had work fixing a DPR fighter’s computer and that in the course of this, he had discovered secret information which he had passed on to Necro Mancer.

Parroting many Russian FSB charges, they assert that Podvezko posted material “inciting enmity on national, social, and socio-political grounds, as well as “calling to action aimed at violating the territorial integrity of the Donetsk people’s republic”.  By this is probably meant that he called the territory Ukrainian and occupied.

He was arrested, they say, in May 2018 and charged with ‘spying’ under article 321 of their ‘criminal code’.  He was ‘sentenced’ on 3 February 2020 by the self-styled ‘appeal chamber of the DPR Supreme Court, which would suggest that he did appeal against an original ‘sentence’.

During the videoed ‘confession’, Podvezko gives the impression of recited something he has been forced to read, and appears to be looking at the person present but not seen for cues.   He states that he did not support the formation of ‘DPR’ in the Spring of 2014, and went on Twitter, where he communicated with other pro-Ukrainian users.  He says that he worked for the SBU by communicating with Necro Mancer until seized on 26 May 2018, and asserts that he learned, after beginning to communicate with Necro Mancert that the latter works with the SBU.  A spokesperson for Ukraine’s Security Service said that she had never heard the name Necro Mancer and could therefore make no comment.

All of the hostages who have been released (and Russia’s Ukrainian political prisoners) have confirmed that they gave such videoed ‘confessions’ under torture, with this generally involving beatings, electric shocks, asphyxiation and other methods.

Podvezko is not the only Ukrainian seized by the militants and ‘sentenced’ over pro-Ukrainian tweets.  See information about Yuri Shapovalov Donbas militants sentence doctor to 13 years for pro-Ukraine Twitter posts and about Marina Yurchak Torture and 15-year ‘sentence’ for insulting tweets about Russian-controlled Donbas militants