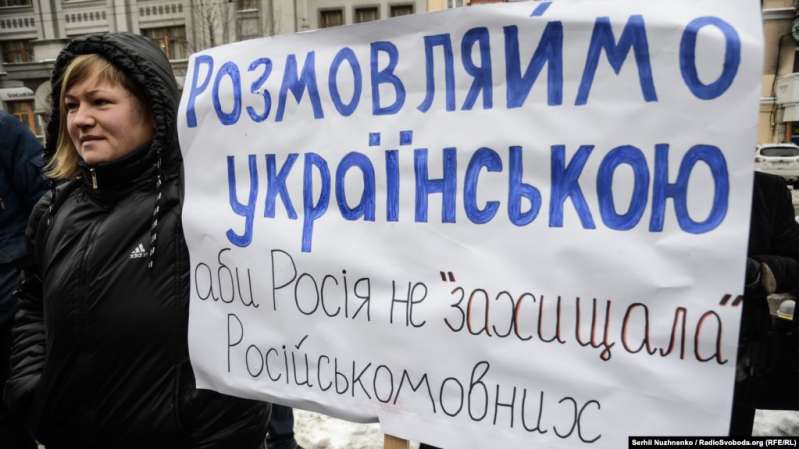 Russia really should avoid citing authoritative Ukrainian public opinion pollsters when lying about the language situation in Ukraine.  The Democratic Initiatives Foundation did not take kindly to such deliberate misrepresentation and has prepared a blistering response which will be shared with the OSCE member states whom Russia’s representative, Alexander Lukashevich, attempted to deceive.

Lukashevich’s address was on 4 June 2020 at the online meeting of the OSCE Permanent Council, and followed a report by Lamberto Zannier, the OSCE’s High Commissioner on National Minorities.  The report did not, regrettably, touch on the dire situation for indigenous languages in the Russian Federation, nor the lack of a single Ukrainian language school, despite a sizable minority, but did make some measured criticism of Ukraine’s recent language laws*.

Lukashevich’s address was full of assertions that are standard for Moscow, about a supposedly ‘substantial restriction of the linguistic and educational rights of the Russian-speaking people in Ukraine”, the claim that Ukraine was forcing the use of Ukraine “through repression rather than incentives”, “the Russian language is facing discrimination on multiple fronts” and about mounting “Russophobia”.

All of this is so customary that it might have gone unnoticed had Lukashevich not decided “to draw [his audience’s] attention to an opinion poll carried out in December 2019 by Ilko Kucheriv Democratic Initiatives Foundation and the Razumkov Centre, showing that 69 percent of Ukrainians want to be free to use the Russian language.”

DIF responded on 13 June, explaining exactly how the Russian Representative to the OSCE had manipulated their findings to conjure up ‘discrimination of Russian speakers’. There had indeed been such a survey, but Lukashevich had misrepresented the results.

Respondents had been asked what kind of status the Russian language should have in Ukraine.  68.5% considered that “the Russian language should be freely used in private life, but Ukrainian should remain the solely state language.  15% believed that Russian should be given the status of official language in certain regions of Ukraine, while a further 11.5% think that both Russian and Ukrainian should be state languages throughout Ukraine.  5% said they didn’t know.

DIF stresses that the view that Ukrainian should be the only state language, and that there should not be any impediment to using Russian in private life is prevalent in all parts of Ukraine.   This has nothing to do with people’s wish to speak Russian as Lukashevich claimed. Instead “it demonstrates Ukrainians’ tolerance to the Russian language despite the fact that Russia occupied Ukrainian Crimea and unleashed war in Donbas which has led to the death of over 13 thousand people and injuries of another ten thousand. “

As for whether Russian speakers face discrimination in Ukraine, DIF notes, the Ukrainian public gave a unequivocal response back in 2014.  Despite all of Russia’s efforts to push the idea that Russian speakers needed to ‘be defended’ in Crimea and Donbas, a survey carried out by the Kyiv International Institute of Sociology in April 2014 which found that 72% of people in the south-eastern oblasts did not agree that the rights of Russian speakers were violated.  According to the International Republican Institute, only 12% of respondents considered there was such discrimination.  In 2016, the Rating Group found that even in government-controlled Donbas 82% of respondents did not consider that there was discrimination of Russian speakers, with only 11% saying, on the contrary, that such discrimination existed. DIF has focused specifically on the question of the Russian language, however all the Russian world ideas that Moscow has aggressively sought to impose on Ukraine since 2014 always had little support from Ukrainians (details of other surveys here).

DIF carried out a survey of public opinion in 2019 after the new Law on Ensuring the Functioning of Ukrainian as State Language came into force.  Only 11% felt that the situation for Russian speakers had worsened, while 5% said that the situation had improved and 72% saw no change.

In light of criticism of the ‘language law’, it is worth noting that the same survey that Lukashevich misrepresented, produced other interesting results. 56% totally agree that the country’s leaders and civic servants should speak Ukrainian in their work, with a further 24% basically agreeing.  While the percentage is lower in eastern and southern oblasts, there is an absolute majority throughout the country. 52.7% are totally in favour of at least half of the content in the Ukrainian media being in the Ukrainian language, with a further 25.9% basically in favour.

DIF points out that a brief perusal of the ‘language law’ refutes the distortions presented by Moscow.  For example, Article 2.2 clearly states that the law does not apply to private communication or to religious ceremonies.

DIF points out that the Russian language is one of the most important components of the ‘Russian world’ mythology which Russia is actively using to extend its geopolitical influence.  It is seeking to increase the number of pro-Russian citizens in other countries who will, in elections, support pro-Russian politicians and thus bring their countries back into Russia’s sphere of influence. DIF warns that the lack of clear policy from the Ukrainian government, and the pro-Russian lobby in Ukraine, are facilitating the development of such a scenario.

Russia used the Russian language as a weapon, especially, although not only, in 2014..  Immediately following its invasion of Crimea, Moscow began trying to convince both Crimeans and the international community that ethnic Russians and Russian-speakers were in danger, and needed ‘defending’.  As mentioned, there was nothing to back such assertions.  Russia even came up with preposterous ‘criminal investigations’ into the so-called “genocide of the Russian-speaking population” in Donbas.

In fact, it is in occupied Crimea that the Ukrainian language has been driven out of schools and the media, with Crimean Tatar also under pressure in schools. In April 2017, the UN’s International Court of Justice ordered Russia to ensure access to education in Ukrainian in Crimea – a binding order which Russia is still flouting.

The Russian proxy ‘Donetsk and Luhansk people’s republics’ have now both declared only Russian to be a so-called ‘state language’, and have essentially removed Ukrainian altogether from the education system.