The Council of Europe is endorsing Russia’s machine of political repressionSentsov: Whenever you think of friendship with Putin and Russia, remember the 13,000 Ukrainians killed and hundreds imprisonedBenefits of PACE ‘dialogue’? Dramatic increase in number of political prisoners in Russia & occupied CrimeaNo ‘normalization’ while Russia is still holding at least 87 Crimean Tatar and other Ukrainian political prisonersRecord prison sentence for Christian faith in Russian-occupied CrimeaPACE finalizes capitulation to Russia, while listing all reasons why this is appeasement 2020: There was no worse year in the realm of human rights after the Revolution of DignityThe practice of application of Article 111 of the Criminal Code of UkraineMPs challenged to fight Russian repression by adopting a Ukrainian political prisonerRussia will imprison all Crimean Solidarity journalists & activists if Ukrainians and the West let itUkrainian hostages not forgotten but Russia understands only the language of ransoms and sanctionsThe price of PACE capitulation to Russia: Soaring number of Crimean Tatar and other Ukrainian political prisonersA brief description of KHPG strategic litigations in July–December 2019Jehovah’s Witness faces 6.5 year prison sentence for religious services in Russian-occupied CrimeaPACE ignored gross human rights violations in Crimea to justify capitulation to RussiaCrimean Tatar political prisoner’s life on the line, with Russia denying medical careCrimean Solidarity activist detained twice and prevented from leaving occupied CrimeaIf Crimea is Ukraine, then take real measures to defend Crimean Tatar political prisonersCrimean Tatar detained for innocuous social media post from before Russia annexed CrimeaA High Human Rights Price if the Council of Europe capitulates to Russia
• Topics / Freedom of conscience and religion
• Topics / News from the CIS countries
• Topics / Human Rights Abuses in Russian-occupied Crimea 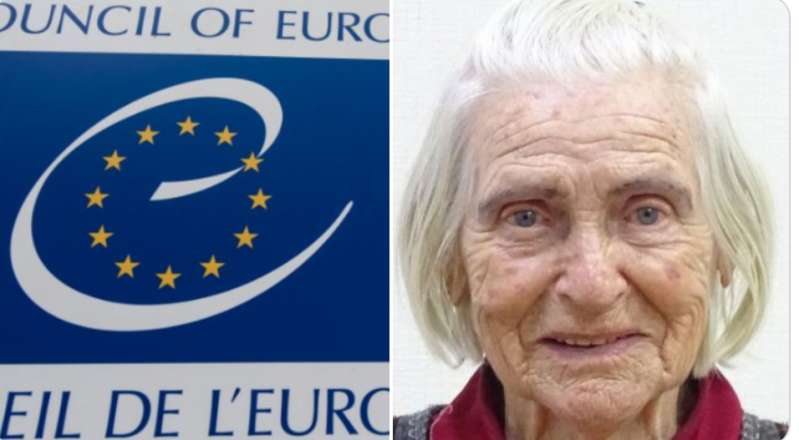 A Russian body which boasts of collaboration with the Council of Europe has added Rimma Vashchenko, a 90-year-old Jehovah’s Witness to its notorious ‘List of Terrorists and Extremists’.  She was added, together with seven fellow believers, most of whom are in their seventies.   They join well over 200 other Jehovah’s Witnesses, including at least three from occupied Crimea; around 80 other Ukrainian political prisoners and a huge number of Russian victims of political or religious persecution whom this state body has labelled ‘terrorists’ or ‘extremists’.  In the vast majority of cases, the people have been added to the list without having been convicted of any crime.

The Council of Europe’s official logo is on the site of Rosfinmonitoring, under the title ‘International cooperation’ and Rosfinmonitoring itself reports that it participates in the work of Moneyyal, or the Council of Europe’s Committee of Experts on the Evaluation of Anti-Money Laundering Measures and the Financing of Terrorism.  Nobody is disputing the need to fight money laundering and the financing of terrorism, but the Council of Europe would do well to consider whether such aims are met by collaboration with this particular Russian body.  Back in February 2020, a Jehovah’s Witnesses spokesperson noted that “Once blacklisted by Rosfinmonitoring, an alert is associated with one’s passport indicating that he/she is suspected of money laundering, financing terrorism, and/or distributing weapons of mass destruction. Consequently, Jehovah’s Witnesses are being deprived of their jobs, businesses, unemployment compensation, pensions, and even the ability to purchase a SIM card for their cell phones or apply for car insurance. They cannot exercise inheritance rights, receive child support, receive judicial compensation for damages, execute powers of attorney, or access their bank accounts.”

Russia is, in short, not fighting money launderers, but elderly ladies whose pensions are likely to be all they have to live very frugally on. With persecution of Jehovah’s Witnesses mounting in both Russia and Russian-occupied Crimea, the number of such victims can only increase.

Jehovah’s Witnesses are, however, not the only victims of persecution on this list produced by a body flaunting the Council of Europe’s logo.

The list still contains, Oleg Sentsov, Ukrainian filmmaker and laureate of the European Parliament’s Sakharov Prize in 2018 who was seized, tortured and sentenced to 20 years’ imprisonment, essentially for his opposition to Russia’s invasion of his Crimean homeland. Russia released Sentsov and civic activist Oleksandr Kolchenko in September 2019, as a price the Kremlin was willing to pay in order to get crucial MH17 witness / suspect Volodymyr Tsemakh safely away from the Dutch prosecutors.

Most of Russia’s Crimean Tatar and other Ukrainian victims of persecution are, unfortunately, still imprisoned, with some facing horrific sentences.  They include renowned Crimean Tatar human rights activist Emir-Usein Kuku, sentenced to 12 years, civic journalists Nariman Memedeminov; Seiran Saliyev; Server Mustafayevv and many other Crimean Tatar civic journalists and / or civic activists.

Instead of obeying a direct order from the UN’s International Court of Justice and removing its extraordinary ban on the Mejlis, or self-governing body, of the Crimean Tatar people and the forced exile of its leaders, Russia has placed Mejlis leader Refat Chubarov on the List of ‘terrorists’ and ‘extremists’.  It is currently staging ‘trials’ in absentia on absolutely surreal charges against both Chubarov and veteran Crimean Tatar leader Mustafa Dzhemilev.

At the very least three Crimean Tatars on the list (Edem Kadyrov; Dilyaver Hafarov and Fevzi Sahandzhy) are serving sentences for alleged involvement in a legal Ukrainian organization (the ‘Noman Çelebicihan volunteer battalion’) in mainland Ukraine.  While, in contrast, 62-year-old Oleh Prykhodkho is facing genuine ‘terrorism’ charges, there are compelling reasons to believe that these charges were trumped up because of Prykhodko’s unconcealed Ukrainian patriotism and opposition to Russian occupation.

These are only some of Russia’s Ukrainian political prisoners.  The Council of Europe  could easily assess the scale of the problem by comparing the ‘List of Terrorists and Extremists’ on the Rosfinmonitoring site that bears their logo with the Memorial Human Rights Centre’s  latest list of political prisoners and those imprisoned for their faith. It would discover that a huge number of Russian citizens whom their Russian state partner calls ‘terrorist’ or ‘extremist’ are recognized as prisoners of conscience.