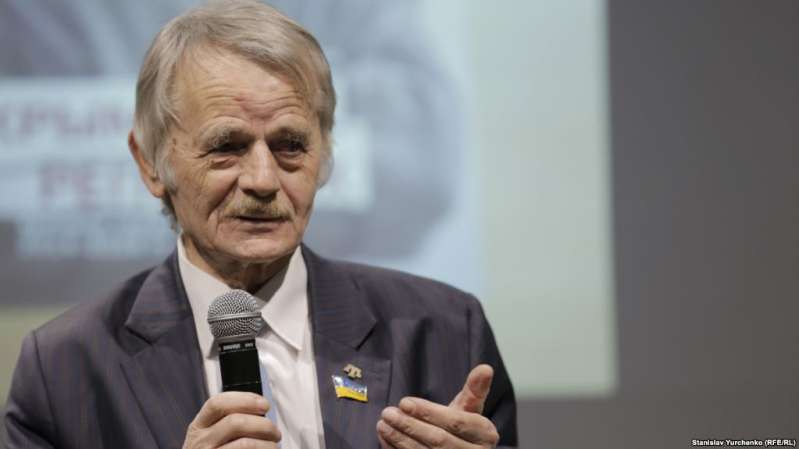 The ‘trial’ has (almost) begun in occupied Crimea of veteran Crimean Tatar leader and Ukrainian MP, Mustafa Dzhemilev.  Even by Russia’s standards, this judicial farce is surreal in its lawlessness, and appropriately enough the scheduled preliminary hearing on 25 June 2020 lasted only minutes, due to gross infringements by the de facto prosecutor.  76-year-old Dzhemilev, a world-renowned former Soviet political prisoner, who has twice been nominated for the Nobel Peace Prize, is accused by Russia of having illegally crossed a non-existent ‘Russian state border’ in trying to return to his homeland, two months after it was invaded and annexed by Russia.  If that were not enough, he is also facing charges pertaining to alleged actions that far precede Russia’s annexation.  All of this is under the control of Magomed Farmanovich Magamedov, from the Russian Investigative Committee’s ‘department for particularly important cases’.

Mustafa Dzhemilev’s lawyer Nikolai Polozov calls the prosecution politically motivated and entirely fabricated, with multiple falsifications.  After the aborted preliminary hearing on 25 June, he noted that Russian ‘investigators’ had obviously all received instructions and simultaneously initiated criminal prosecutions against Dzhemilev; Refat Chubarov, head of the Mejlis, or governing body, of the Crimean Tatar people and Lenur Islyamov.  The prosecutions were evidently in response to the Crimean Tatar leaders’ initiative for a March of Dignity from mainland Ukraine to Crimea.  Although the March of Dignity had to be postponed because of the pandemic, Russia and the puppet Crimean ‘authorities’ have reacted aggressively, issuing threats and these insane criminal ‘trials’.

Russia may be riding roughshod over international law, but you might expect it to take Russian legislation seriously, yet here too the charges bear no scrutiny.  Dzhemilev had not been properly informed of the ban, and, according to Polozov, the FSB have refused to hand this document over to the Investigative Committee investigator.

Russia is also claiming that Dzhemilev tried to cross a border checkpoint, however the FSB needs to establish such ‘border controls’ which then has to be implemented via a government decree.  None of this had happened until long after the attempted crossing into Crimea at Armynask on 3 May 2014.

The above is important, however the key point remains the fact that Russia, as invading and occupying power, illegally banned Mustafa Dzhemilev from his homeland and is now trying to ‘convict’ him of endeavouring to enter Crimea which the entire world recognizes as Ukrainian.

Understanding the enormous respect that Dzhemilev enjoys among Crimean Tatars and other Ukrainians, as well as internationally, Russian President Vladimir Putin initially tried to woo him with promises.  He learned swiftly that both Dzhemilev, and the Mejlis, were totally opposed to Russian occupation and true to Ukraine.  Dzhemilev had been enemy No. 1 for the Soviet regime, and now became the Kremlin’s top enemy.

The events that day were used for the first wave of Russian arrests and political ‘trials’ in occupied Crimea.  The charges against Mustafa Dzhemilev have no practical consequences as the Crimean Tatar leader is already in exile and the international community will certainly not recognize any ‘conviction’.  The resurrection of these grotesque charges can, however, result in real persecution for Crimean Tatars living in occupied Crimea, and the ‘Investigative Committee’ has specifically initiated separate proceedings over what it is claiming was a “prior conspiracy”.

A distressingly cynical aspect of the indictment is that one of the men cited as ‘a witness’ is Ervin Ibragimov, the Crimean Tatar civic activist and Executive Member of the World Congress of Crimean Tatars who was abducted by men in uniform on 24 May 2016.  He has not been seen since, one of many victims of enforced disappearances under Russian occupation.

The repeat ‘preliminary hearing’ is due to take place at the Russian-controlled Armyansk City Court on 9 July 2020.