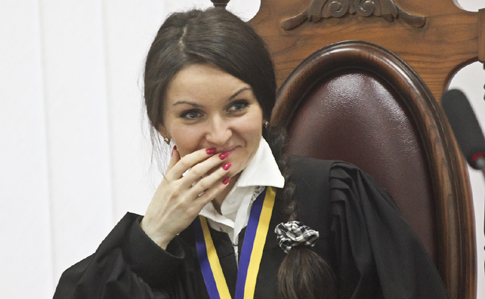 Oksana Tsarevych has been acquitted by a Kyiv court of knowingly passing wrongful rulings during the Euromaidan protests when she stripped at least four Automaidan activists of their driving licences.  The prosecutor’s office has promised to appeal the ruling on 30 June, although some clearly feel that the prosecutor contributed to the collapse of one of the few cases where judges have been held to answer over the persecution of Maidan activists.

Tsarevych, as a judge of the Pechersky District Court in Kyiv, played a role in the politically motivated persecution of President Viktor Yanukovych’s main rival Yulia Tymoshenko and two people in her government (Yuri Lutsenko and Valery Ivashchenko).  It was, however, over the prosecution of Maidan activists that President Petro Poroshenko dismissed Tsarevych back in 2016, and criminal charges were laid against her.

After the Automaidan car procession on 29 December, 2014 to Yanukovych’s opulent, secretive and illegal residence at Mezhyhirya and the sumptuous homes of others in high positions, activists and journalists who took part received visits from traffic police officers, or invitations to come to the police station for a “chat”.  Traffic police protocols, were then used by the court to deprive activists of their licence for 3 or 6 months. Although the prosecution accused Tsarevych over four cases, the civic court watchdog ProSud reports that she ordered the suspension of nine driving licences.

There were witnesses confirming that the charges were fabricated, as well as evident infringements.  Roman Maselko, who was representing the Maidan activists stripped of their licences, back in July 2015 gave a detailed account of all the cases, the infringements in each, including the total failure to consider evidence that the protocols were faked and that the people prosecuted and stripped of their licences had been somewhere else altogether. It is hardly surprising that he too is planning to appeal against the acquittal read out over four hours on 30 June by judge Yevhen Martynov from the Shevchenkivsk District Court in Kyiv, after court hearings dragged out over almost five years.  Tsarevych had been charged under Article 375 § 2 of Ukraine’s Criminal Code: handing down knowingly unlawful rulings. The prosecutor asserted, and will presumably reiterate in the appeal, that Tsarevych consciously passed the wrongful rulings  “trying to show loyalty to the regime in order to get benefits and promotion”.

Tsarevych herself denied the charges, claiming them to be politically motivated.

Martynov ruled that the prosecutor had not presented enough proof that Tsarevych had knowingly issued wrongful rulings.  The fact that three out of four rulings had been revoked at appeal level did not prove anything, he said, since new evidence had been presented during the appeal hearing.  Martynov stated that Tsarevych had considered administrative protocols in a reasonable time frame and had even, allegedly, safeguarded the adversarial system of the parties,  If Graty’s correspondent heard Martynov correctly, then the latter referred to a letter from the Kyiv City State Administration saying that no civic organizations had informed them of car processions during the period in question. This, he appears to have argued, means that it is unwarranted to speak of the persecution of Automaidan activists.

This trial was certainly drawn out, yet six years cannot completely expunge people’s memories of the winter of 2013-14.  At that time, essentially all protests were banned, making the argument about lack of notification seem most bizarre. So too is any denial of the evidently political nature of many of the rulings passed by certain judges.

ProSud notes that the court questioned a traffic inspector who confirmed that the reports which were used by Tsarevych to convict the four victims were faked. The civic activists are, however, critical of the prosecution for sabotaging the case by not calling key witnesses, such as court workers who could confirm how cases were handed to Tsarevych through intervention, overriding the supposed automatic system for distributing cases.  The victims were themselves planning to call witnesses after those questioned by the prosecutor, however the pandemic and related restrictions got in the way.

It accuses Martynov of having speeded up the trial during this ‘quarantine period’ and of having questioned Tsarevych at a time when neither the victims, nor their lawyers, could be present.

Even if the appeal court overturns this ruling, it will have to move fast, and Tsarevych might well appeal against a conviction.  In June 2020, Ukraine’s Constitutional Court ruled that Article 375 (the article Tsarevych is charged under) is unconstitutional.  It apparently deferred the judgement from coming into force for six months, however it seems likely that the argument will be made that something unconstitutional in six months, was unconstitutional when the charges were laid and are so now.

It was reported in February 2019 that 227 judges who had persecuted Maidan activists remained in their posts. The ruling on 30 June 2020, as well as the Constitutional Court judgement make it seem increasingly unlikely that there will be any accountability for rulings that it is near impossible to believe were handed down in good faith.