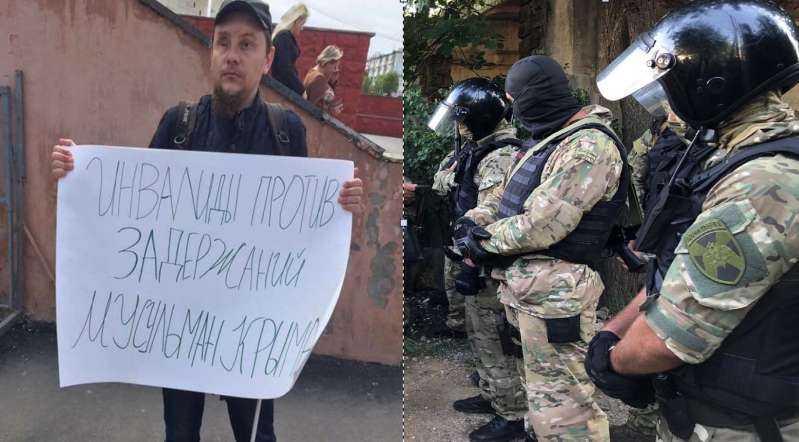 Russia’s latest ‘operation’ in occupied Crimea began, as always, with armed searches in the early hours of 7 July 2020.  The masked men in full military gear found nothing among children’s toys and clothes, except the ‘prohibited books’ that they had brought with them   11 searches were carried out, with seven men arrested, including Alexander Sizikov, who totally lost his sight over ten years ago.  It is likely that the toll from Tuesday’s wave of repression will increase as one Crimean Tatar activist, Dilyaver Memetov was not at home when the armed and masked men arrived, and a search is out for him.

In response to this latest Russian ‘operation’ in occupied Crimea,  Crimean Solidarity activist Lutfiye Zudiyeva wrote that “for tiny Crimea, covering only 27 thousand км², such an incredible number of “Crimean Tatar terrorists” (more than 70 as of today) who have not committed a single act of violence and have never faced criminal prosecution before, is not simply a bit excessive, but systematic repression that is obvious to the entire world.

Do you know what real violence and danger to public safety are in their current manifestations in Crimea?  It’s when a huge nuclear power, with territory spanning 17 million км², a permanent member of the UN Security Council with the right of veto, and democratic ambitions but with the soul of an intrenched imperialist, cannot accept the will of a small, but steadfast Muslim Crimean Tatar people and hurls all of its ‘arsenal’ at fighting peaceful civilians rather than dealing with real crimes in its own country.

They could try to catch murderers, drug addicts and corrupt players like they ‘work on’ Crimean Tatars for their political and religious views and their strength of spirit which the enforcement officers lack enough of to reject this profanation of their work.”

Russia has been using trumped-up ‘terrorism’ charges, based solely on unproven allegations of involvement in the peaceful Hizb ut-Tahrir movement since the beginning of 2015, and is increasingly using such charges as a method of imprisoning civic activists who report on human rights violations in occupied Crimea.  The arrests on 7 July 2020 are no exception, with at least four of the men: Vadim Bektemirov; Alexander Sizikov; Alim Sufianov and Emil Ziyadinov having taken part in activities to help political prisoners and to ensure that information was circulated about such repression.  Since the arrests of 24 civic activists and journalists on 27 March 2019, the FSB have also begun imprisoning men whose age and / or medical issues make detention a real danger to life.  This time, they have chosen to charge Sizikov, a man who has been blind since 2009 and has first group disability status, with ‘involvement in a ‘terrorist’ organization and, almost certainly, ‘plans to violently overthrow the state’  The FSB may have targeted him as a Muslim convert, however it is also likely that this was because he twice held single-person pickets in support of recognized political prisoner Edem Smailov who, until his arrest in May 2018, had cared for Sizikov.

There is one other chilling factor explaining why the FSB target this person and not that. Nina Malik has recounted how the armed enforcement officers arrived at 3 a.m. and carried out their ‘search’, which involved turning everything upside down and claiming to have found a book that her husband, Zekirya Muratov said was not his. Muratov’s wife also explains that “a man from Simferopol” turned up two months ago and suggested that her husband collaborate with them.  Muratov refused and the man told him “I’ll get you jailed whatever”.   It appears that the man in question was Alexander Kompaneitsev, a Ukrainian turncoat, who is known to have used similar methods to get huge sentences against human rights activist Emir-Usein Kuku; Arsen Dzhepparov; Inver Bekirov and others.

Russia’s ‘trials’ of men on charges of involvement in Hizb ut-Tahrir are based solely on ‘expert assessments’ by FSB-loyal academics, normally with little or no knowledge of Islam and on ‘secret witnesses’.  Although some of these anonymous ‘witnesses’ are FSB officers, there are probably some people who were threatened with arrest themselves if they refused to give false testimony.

With the prosecutor and courts essentially never stepping out of line, literally nothing more is needed.  Hizb ut-Tahrir is a peaceful Muslim organization which is not known to have committed any acts of violence or terrorism anywhere in the world, and it is, accordingly, legal in Ukraine and most countries.  Russia is the only country in the world that has called it ‘terrorist’, in a ruling from 2003 that was kept secret until it could not be appealed.  That ruling, which the renowned Memorial Human Rights Centre believes to have been politically-motivated, is now used to imprison men for up to 24 years.  Literally all that is required is to ‘prove’ that a person read Hizb ut-Tahrir books or discussed their ideology, with such ‘proof’ provided by dodgy ‘experts’ and probably fake ‘secret witnesses’.

In this case, the FSB appear to be planning to charge Alexander Sizikov, despite his disability, with heading a Hizb ut-Tahrir ‘cell’ in Bakhchysarai, under Article 205.5 § 1 of Russia’s criminal code, with this carrying a sentence of up to life imprisonment.  The FSB claim that two men Alim Sufianov and Seyran Khairedinov were ‘involved’ in this supposed cell, with the charges of ‘involvement’ under Article 205.5 § 2 of from 10 to 20 years.  Members of both Sufianov and Khairetdinov’s families have spoken of the enforcement officers having ‘found’ what they themselves planted during the ‘search’.

The FSB are also accusing Emil Ziyadinov of having headed a Hizb ut-Tahrir group in Krasnogvardeiskoye.  They have not named the people who were purportedly in this group.  Vadim Bektemirov is supposed to have been part of a group in Simferopol.

Ismet Ibragimov is accused of having been the ideological leader of unidentified individuals in the Simferopol district.  Ibragimov also asserts that a book was planted on him.  It is typical of the level of the people deployed in such ‘operations’ that they put the book in a rubbish area, next to the place where they keep coal.  This was convenient for them, but it is insultingly improbable that a practising Muslim would have kept a religious book in such a location.

Zekirya Muratov is accused of being part of an Alushta group.

The fact that so many of the men are accused of an ‘organizing’ role, with so little detail available, is disturbing as the likely sentences in these cases are particularly horrific.  it is also menacing, with that quite likely intended as a threat and warning to others that they could be arrested next.