Prisoner exchange leaves most Donbas hostages in captivity and makes journalists suspiciousDesperate plea to Zelensky from relatives of hostages once again forgottenRussian-controlled Donbas militants finally free severely disabled pensioner but not her invalid sonTortured and jailed or killed for the Ukrainian Flag and for supporting Ukraine in occupied DonbasAgonizing silence about Ukrainian sportsman abducted by Russian military in DebaltseveRussian-controlled Donbas militants torture and imprison Donetsk lecturer for ‘spying for Ukraine’The Endless waiting that Russia has inflicted on families of Ukrainian soldiers missing or imprisoned in DonbasRussian-controlled Luhansk militants claim young hostage ‘spied’ for Ukraine as a 16-year-oldYoung Ukrainian ‘sentenced’ in Russian proxy Luhansk ‘republic’ to 12 years for ‘state treason’ & ‘spying’Russian proxy Donetsk ‘republic’ sentences Ukrainian war veteran to 16 years for defending UkraineFake ‘Ukrainian fascist’ arrested and charged with working for Russia and its proxy Luhansk ‘republic’ Czech gets 15 years on terrorism charges for fighting for Russian-controlled Donbas militantsPrisoner exchanged for Ukrainian hostages gets 17-year sentence in Russian proxy Luhansk ‘republic’Czech gets 3-year sentence for fighting in Donbas on side of Russian-controlled militants17-year-old prevented from leaving Russian-occupied Crimea to study in mainland UkraineUkrainian hostages not forgotten but Russia understands only the language of ransoms and sanctionsEmpty promises from Ukraine’s leaders as release of Kremlin’s hostages ‘buried’Russia’s fake ‘Ukrainian fascist’ returns to Ukraine to fight against ‘fratricidal’ war in DonbasWhy expel Russians ‘planning crimes for the Kremlin’ when Russia holds so many Ukrainian political prisoners?Ukrainian researcher tortured & sentenced to 13 years for ‘treason’ against a fake Russian proxy republic
• Topics / Victims of political repression

Why expel Russians ‘planning crimes for the Kremlin’ when Russia holds so many Ukrainian political prisoners? 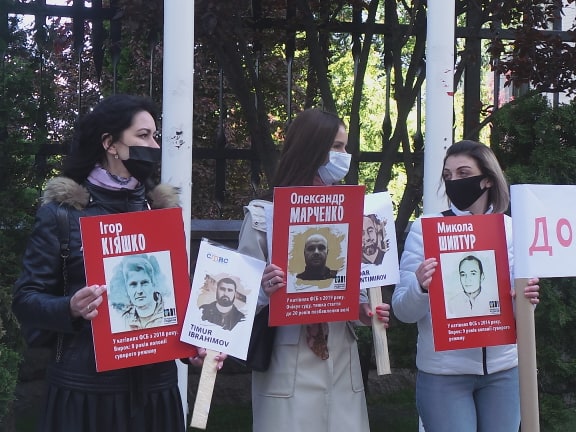 There is bemused indignation among relatives of the Kremlin’s many Ukrainian political prisoners at police reports that two Russians working for the FSB and believed to have been planning to commit grave crimes in Ukraine have merely been deported from the country.  Ukraine is certainly correct in spurning Moscow’s methods of fabricating criminal charges against Ukrainians either for propaganda purposes, or to use them as hostages for securing concessions from Kyiv. It is considerably harder to understand why, if the reports are correct, Kyiv would merely turf suspected criminals, working for the aggressor state, from its territory.

The Ukrainian National Police’s Department for Strategic Investigations reported the expulsion of two Russian citizens on 8 July.  With no consideration for the presumption of innocence, the Department stated that the two men “worked for the Kremlin’s security service and were planning to commit serious crimes aimed at destabilizing the situation in the country.  The two men had been detained the previous day, with reports issued to the Ukrainian media.  The Department asserted that “the Russians were members of armed formations, worked for the Russian security service and took part in military conflicts on the territory of various countries”.

In short, the police and Ukrainian Migration Service claim to have deported exactly the kind of men whom Russia used to unleash its carnage and suffering in Donbas in 2014.  The police, moreover, assert that they had reason to believe that the men were planning crimes in Ukraine.

It is not easy to see the point of inventing such a story, but equally hard to comprehend Kyiv’s actions if it was true.  Why not seek to prove what the men were (allegedly) up to and, at the very least, make the plans public?   It is surely sending the wrong message to Moscow by merely expelling those caught.

An even more disastrous message is given to the families of well over 200 hostages held prisoner by the Russian-controlled ‘Donbas republics’ and around 100 Crimean Tatar and other Ukrainian political prisoners held in occupied Crimea or Russia.

Russia began taking Ukrainians prisoner on politically-motivated grounds soon after it invaded and annexed Crimea. It has consistently ignored the clear commitment in the Minsk Accords that all prisoners should be released on an “all for all” basis.  At his annual press conference in December 2015, Russian President Vladimir Putin proved much more concerned about ‘equal’ exchanges, and spoke in terms of political ransoms, rather than compliance with a binding agreement.

While many have felt that Ukraine’s leaders have not done enough to secure the release of hostages and political prisoners, Ukraine has, at least, followed the principle that all such hostages must be returned.  Russia has, in general, shown very little interest in many of the Russians imprisoned in Ukraine for crimes linked with the conflict in Donbas. There were, however, exceptions.  In May 2015, Ukrainian former military pilot, MP and Russian political prisoner Nadiya Savchenko was finally released in exchange for two Russian military intelligence [GRU] officers - Yevgeny Yerofeyev and Aleksandr Aleksandrov.  The latter had been caught taking part in an armed ambush on Ukrainian soldiers in the Luhansk oblast, in which one Ukrainian soldier was killed.   In September 2019,  Russia freed the most prominent Ukrainian political prisoners, including Oleg Sentsov, in exchange for important MH17 witness (or suspect) Vladimir Tsemakh. This was a very difficult decision, since the life of several of the political prisoners was in danger, but it did enable Russia to hide a person with first-hand knowledge of its horrific crime that cost the lives of 298 passengers and crew of Malaysian airliner MH17.

Exchanges of hostages held by the Russian-controlled militants in occupied Donbas have been a little more complicated, with one of Russia’s motives here almost certainly destabilization of the situation in Ukraine. The latter was certainly achieved by the inclusion in the exchange of the only former Berkut officers on trial for the gunning down of Maidan activists and of three men convicted (only by a first-level court) of a terrorist attack in Kharkiv that killed four people, including a child.

At present, there seems to be no movement at all on negotiating either Donbas hostage and POW exchanges or the release of political prisoners held in occupied Crimea and Russia.  Several of the prisoners are in ill health, and many have been imprisoned now for five or six years.

There are certainly economic or political moves that Ukraine could make in exchange for the release of political prisoners.  It has long been feared, for example, that Russia might attempt such a deal to get water supplies, which Ukraine cut off after Russia’s invasion, reinstated. This is hopefully understood to be a red line that Ukraine’s leaders must not cross.  Since Russia has already imprisoned as many new political prisoners as it released in September 2019, the move would also gravely backfire.  There will be no let up in political and religious persecution in Crimea until Russia’s occupation ends, and reinstating water supplies would, on the contrary, help to make that occupation permanent.

Exchanges of prisoners are difficult since, unlike Russia, Ukraine is not imprisoning Russians on politically-motivated charges, and does not have enough ‘hostages’ to bargain with.  There is some hope after the seizure by the Ukrainian Security Service in recent days of a militant whose intercepted telephone calls reveal the level of involvement of Russia’s military intelligence and FSB in the conflict in Donbas.

This week alone, however, Russia arrested (at least) eight Ukrainians, most in occupied Crimea. with all of them facing huge sentences on trumped-up charges.  And Ukraine released two Russians whom it suspected of planning real crimes for the aggressor state.

The list of political prisoners here is still current, although unfortunately new names now need to be added.