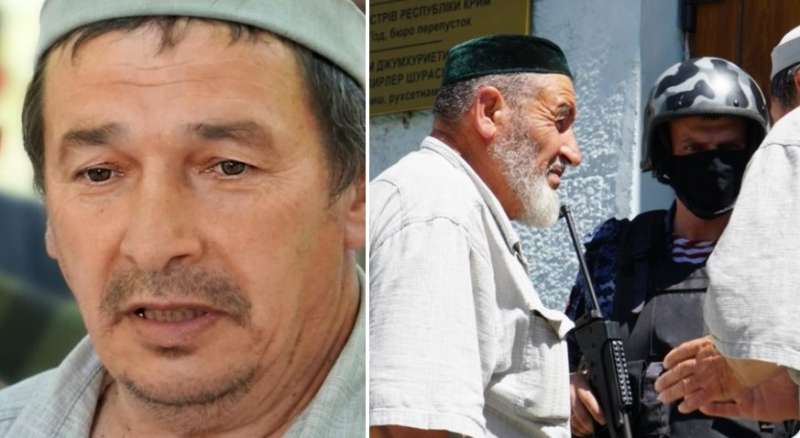 Serious propaganda methods are needed to present an armed operation against a blind young man and six law-abiding Crimean Tatar husbands and fathers as ‘Russia’s fight against terrorism’.  This time Sergei Aksyonov, the Russian-installed Crimean leader, got involved, thanking the FSB and other Russian enforcement officers with machine guns who had burst into homes where young children were sleeping  and planted ‘prohibited literature’ in order to imprison the children’s fathers for a decade or more.  Aksyonov claimed this was impeccable “work in fighting extremism and terrorism”, and that such “individuals” “should and will be imprisoned, without any variants”.

Russia’s puppet leader hid behind closed doors, however, when a group of elderly veterans of the Crimean Tatar national movement arrived at the building of the Crimean Council of Ministers, demanding an explanation and apology.

On both 8 and 9 July, the group of elderly men, some of whose sons are among the ever-rising number of Russia’s political prisoners, sought a meeting with Aksyonov, but to no avail.

On 8 July, the men were told that Aksyonov had nothing to do with the armed searches and arrests (that he had praised) and that he would not agree to see them. After they refused to go away, they were ‘offered’ a meeting between five of the men and Albert Kangiev, the so-called head of the state committee on inter-ethnic relations.  This they, understandably, rejected.  Kangiev is one of the few Crimean Tatars who chose to collaborate with the Russian occupation regime, and he was challenged by the men to say whether he believed that their sons and other men are ‘terrorists’.  He tried to weave around the question, claiming that there needs to be trust in ‘the justice system’.  This is a ‘justice system’ which has ignored flagrant falsification and prosecutions based almost solely on ‘secret witnesses’ and FSB ‘experts’, and has sentenced men to 19 years’ imprisonment without a crime.

One of the men demanding to see Aksyonov was renowned Crimean Tatar historian Shurki Seytumerov, whose two sons – Seytumer Seytumerov and Osman Seytumerov were arrested on 11 March 2020.

“I consider it my duty to come here today and address the official, sitting in his comfortable chair and seeing fit to hurl abuse at my people, our sons, grandsons, to desecrate our memory, including that of my grandfather who was accused in just the same way in 1938 of terrorism and executed after 2 months.

Shurki Seytumerov went on to say that it was this lack of accountability that led to individuals like the man sitting in that building (i.e. Aksyonov) to feel confident of their impunity.

Addressing Kangiev, who was obviously discomforted by the situation, he said:

They were demanding a meeting with Aksyonov, he said, so  that there would be no repetition of “mistakes”  like that perpetrated against his grandfather.  In his later address, Seytumerov says that Russia took 50 years to acknowledge that the deportation of the Crimean Tatar people had been ‘mistaken’.  There can be no waiting for Moscow to admit to this new ‘mistaken’ persecution.

Kangiev began claiming that “this will not happen”, but was stopped short by the elderly men who had gathered. “It is already happening!  Books are planted, our children are imprisoned. If such destruction of our people is underway, why are you working in this structure?  Why are you not acting?”, they asked.

There was little point trying to get through to Kangiev, and Enver Seytmemetov, brother of one political prisoner,  Rustem Seymemetov, and the uncle of Osman and Seytumer Seytumerov simply told him to pass on a message “that among Crimean Tatars there are no terrorists and to release our lads and to stop their torment of our people”.

The men tried again on 9 July, reiterating their demands for an apology from Aksyonov and with Shurki Seytumerov noting that the latter was willing to hurl lies and slander about, but lacked the courage to meet with a group of 30 -35 elderly men.

The historian and father of two political prisoners pointed out that they viewed Aksyonov’s words both as a threat, and as an attempt to encourage part or all of the Crimean Tatar people to leave their homeland. “We came here to live, and if somebody doesn’t like that, then let them buy tickets and go back to where they came from.”

“Today our people are being accused of terrorism”, Usein Velikhayev said, “Aksyonov talks about laws, but what kind of laws talk about planting books and then accusing people of terrorism?! In which laws is it written that blind people and pensioners are terrorists?  Who is a terrorist? It is a person who terrorizes.  Who is terrorizing these days?  After their terrorism, our children can’t speak for two weeks.”

If we don’t all open our eyes to this, he added, we will again be heading to the tragedy of 1944 (the Deportation)

“This tragedy is everyday descending on us, on our children, and our grandchildren. It needs to somehow be stopped. The world community was silent and swallowed 1944, and now this is returning.”

Back on 18 May 2016, the Chief Rabbi of Ukraine, Yaakov Dov Bleich, addressed the world insisting that it must not ignore the suffering of the Crimean Tatar, “they way it once did ours”.

The situation has been getting worse and worse.  It cannot be said that there is total silence. There was international condemnation of the armed searches and arrests on 7 July.  There always are messages of deep concern, but Russia has learned that they remain words, and continues its repression.

If you read the FSB report on its 7 July ‘operation’, or the Russian-controlled media, you will be told that the FSB, aided by other Russian enforcement bodies, ‘broke up some terrorist cells’.  One article in ‘Krymskaya Gazeta’ has as its title “Find and neutralize’.

Unsurprisingly, these sources, and Aksyonov preferred not to mention that one of the alleged ‘leader of a terrorist cell’ is Alexander Sizikov, who is blind and unable to move about without assistance.  A huge crowd waited near the Russian-controlled court during the evening of 7 July, with this possibly the reason that Sizikov was at least placed under house arrest, rather than detention.  The six other men arrested that day are now in SIZO [remand prison], with this ‘case’ the latest of many in Russia’s conveyor belt of repression.

The ‘terrorism’ claims are based solely on the fact that Russia’s Supreme Court in 2003 declared the peaceful Hizb ut-Tahrir movement to be ‘terrorist’.  It did not provide any reason for this decision which makes Russia literally the only country in the world to consider Hizb ut-Tahrir terrorist.  The organization is legal in Ukraine.

The Supreme Court’s 2003 ruling is now used to charge men with unproven involvement in a terrorist organization.  Real ‘proof’ of involvement is not required, since the court ignores the shocking flaws in the case and the lack of any credibility of ‘secret witnesses’.

This really is a conveyor belt, with the new arrests bringing to 75 the number of political prisoners either convicted or accused of charges of ‘involvement’ in a movement that has never carried out acts of terrorism anywhere in the world.

The FSB can claim to be ‘fighting terrorism’, while instead bringing terror to Crimea and arresting men for their religious and political views, as well as, in many cases, for their civic activism and journalism.

Seven men are now facing sentences of up to 20 years or more, without any crime.  Their 12 children (and another expected) have brought the number of Russia’s smallest, most vulnerable victims of repression to 185.