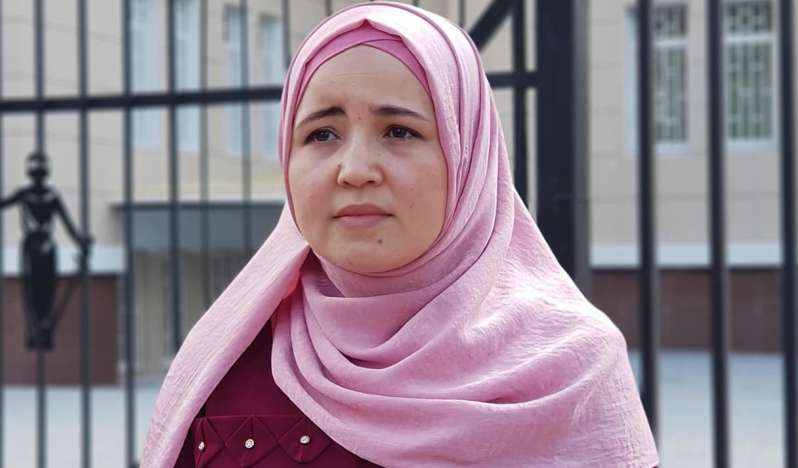 Lutfiye Zudiyeva, one of the coordinators of the Crimean Solidarity civic initiative and a civic journalist, has lodged important legal challenges against ‘warning’ she was issued by the Russian-controlled prosecutor and police against supposed ‘extremist activities’.  Around 60 ‘warnings’ were delivered to various Crimean Tatar activists and public figures at the beginning of May in a move that was clearly aimed at intimidation and that demonstrated the occupation regime’s discrimination against Crimean Tatars and all civic activists.

Zudiyeva received two visitations and ‘warnings’ on 1 May 2020,  one from the police, the other from the prosecutor.  One of the documents warned the mother of four against protests involving weapons, explosives and toxic substances.  There have never been any such protests in occupied Crimea, and one of the reasons for the warnings arriving in May was clearly because of the approaching anniversary of the 1944 Deportation of the entire Crimean Tatar people from their homeland.  Russia began banning remembrance gatherings shortly after its invasion and annexation of Crimea, and continues to prohibit virtually all gatherings on that most bitter of all anniversaries for Crimean Tatars.

It was not only the suggestion that honouring the victims of a heinous act of genocide could be ‘extremism’ that made the warnings this May so offensive.  Both visitations came during the Holy Month of Ramadan as Zudiyeva was busy preparing food or the breaking of the fast that evening.  She explained that the Dzhankoy prosecutor’s warning suggested “that I had not informed and not agreed with the ‘executive bodies in Crimea’ my plans to prepare “unlawful actions on violating public order, provocation to actions of an extremist nature and resistance through force to the authorities of the Republic of Crimea from 1 to 5 May.”  The police warning openly mentioned three dates, including the anniversary of the Deportation and Crimean Tatar Flag Day on 26 June.

“To say prayers in a mosque to mark 18 May – that is shocking extremism.  To believe in God and to dare to criticise the actions of the authorities who have over these 6 years simply terrorised my people with arrests for 15-20 years, early morning searches in homes where families with small children are sleeping and endless courts – that is, of course, extremism! In its particularly dangerous ‘manifestations’: posts on Facebook; participation in public human rights events; meetings with journalists; and help to the families of political prisoners.

And If now in Crimea they have seriously decided through such a mass ‘leaflet war of warnings’ to fight the peaceful Crimean Tatar Muslim protest movement, they could at least remove the paragraphs about weapons, alcohol and toxic substances.  For credibility.  And do not dare to mix 18 May with extremism. Let people peacefully remember the death.  This is sacrilege.”

Zudiyeva has lodged two separate civil suits, demanding that the actions of those responsible for the issuing of the ‘warnings’ be declared unlawful.  On 14 July, the preliminary heading began at the Dzhankoy District Court with regard to the suit against the deputy prosecutor of the Dzhankoy inter-regional prosecutor’s office, Sergei Zuburaev.   The hearing, before ‘judge’ Yelena Logvinko, was adjourned until 23 July, however, as Zubaraev had asked for the Crimean prosecutor to be treated as co-respondent, with neither the claimant nor her lawyer objecting.  The same is expected with the suit against the police, scheduled for 16 July, since there too the police officer cited orders from his superiors.

Justice is seldom seen from Russian-controlled courts, however Zudiyeva and her lawyer have presented a very strong case.  Even Russia has rules for the issuance of such ‘warnings’ and these were flagrantly ignored. Any warning based on information received must be preceded by a thorough check of the information, which needs to be provided in writing.   In Zudiyeva’s case, she was merely told that ‘information’ had been received of possible mass “unauthorized events where I am supposedly both a participant and an organizer, and where “infringement of public order”, “actions of an extremist nature” and “resistance to representatives of the authorities” are purportedly planned. No explanation was sought from Zudiyeva, no indication of what actions are claimed to be of an extremist nature, and, most importantly, no information was provided of any check into the alleged reports.  The claim lists other requirements, none of which were followed.

Zudiyeva asserts that such a warning, claiming extremism and even plans to commit unlawful acts as the alleged organizer of public ‘unauthorized events’, must have an adverse effect on her reputation and could complicate her inter-personal relations, including of a professional nature.  She asks the court, therefore, to find Zuburaev’s ‘warning’ to have been unlawful and to revoke it.