Russia and its proxy Luhansk ‘republic’ join Belarus in attack on abducted journalist Roman Protasevich Abducted journalist’s life is in danger in Belarus. Not only his while Lukashenko and Putin get away with terrorismUkraine is illegally deporting activist to Belarus tp face persecution Belarus KGB arrest journalist who identified the Ukrainian Berkut helping Lukashenka regime Belarusian Journalists Handed "Absurd" Prison Sentences For Live Coverage Of Anti-Government RallyMore Than 1,000 Detained In Belarus As Protesters Face Tear Gas, Stun Grenades, BeatingsBelarus: Savage attack and possible 3-year sentences against journalists reporting March against TerrorBelarusian Police Detain More Than 90 As Protests Enter 11th WeekBelarus threatens to use lethal force against protesters as pensioners march for freedomHow post-election protests are creating a new Belarus’We’re Belarusians, Not A Russian Region’: Protests Take Aim At KremlinLukashenka returns Donbas mercenaries to Russia, others, reportedly, on their way to BelarusBelarusian museum director who refused to sign false election protocol found deadLukashenko regime’s savagery may be backfiring in BelarusBelarus initiates ‘mass riot’ criminal charges against detained Ukrainian rights activistsBelarusian Opposition Presents Broadest Challenge Yet To Strongman Lukashenka After Disputed ElectionBelarus: ‘I appeal to all Europe: Please help us, because they’re killing my family’Belarus: Peaceful protester killed in violent crackdown after claimed Lukashenko victoryWhy were Wagner fighters from Russia seized in Belarus and can Ukraine get them extradited?State Media Vs. The Streets: How Lukashenka Lost The Media War In Belarus
• Topics / News from the CIS countries 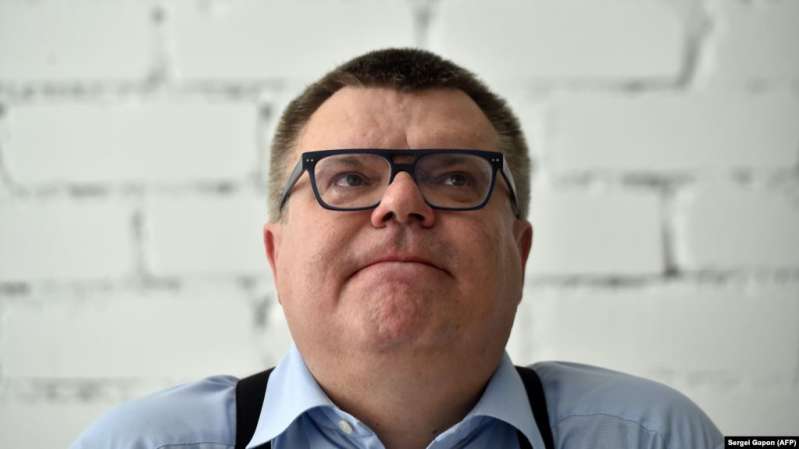 MINSK -- A top challenger to Belarusian President Alyaksandr Lukashenka has been barred from running in the country’s election next month amid growing public discontent over the Belarusian authoritarian leader’s handling of the coronavirus pandemic.

The Belarusian Central Election Commission (CEC) announced on July 14 that five candidates were officially registered for the August 9 ballot, including Lukashenka, 65, who has ruled the country since 1994.

However, the CEC also said that Viktar Babaryka, a former bank manager now in jail on charges that he and his campaign say are politically motivated, was left off the list of candidates.

CEC chairwoman Lidziya Yarmoshyna said that Babaryka was not registered because inconsistencies were allegedly found in his income and property declaration, and because a foreign organization had taken part in his election campaign. She did not elaborate.

Valer Tsapkala, a prominent businessman and former Belarusian ambassador to the United States, was also disqualified from running by the CEC.

Yarmoshyna said Tsapkala had been disqualified due to the rejection of many of the signatures his campaign collected to get him on the ballot.

In the evening, hundreds took to the streets of the capital, Minsk, and other Belarusian cities to protest the decision to bar Babaryka and Tsapkala. A number of people were detained during the rallies, including an RFE/RL correspondent in Minsk.

The European Union’s foreign policy chief Josep Borrell said that "the seemingly arbitrary exclusion of candidates limits the possibility for the Belarusian people to express their will and already undermines the overall integrity and democratic nature of the elections."

"By denying the registration of Viktar Babaryka and [Valer] Tsapkala the Belarusian authorities have failed to ensure a meaningful and competitive political contest," Borrell said in a statement.

The election comes as Lukashenka faces mounting public opposition to his rule. The country has been hit hard by the coronavirus pandemic with more than 65,000 confirmed cases as of July 14, according to data compiled by Johns Hopkins University.

Lukashenka ignored calls to institute any lockdown measures, dismissing the virus as nothing more than a ’psychosis.’ Hundreds of people, including activists and bloggers have been arrested as the government has cracked down hard on rallies and demonstrations despite calls for restraint from Western governments and institutions, including the United Nations.

Babaryka and his son were arrested on June 18 after police questioned them on allegations of tax evasion and money-laundering in connection with an investigation at the Russian-owned Belgazprombank, where the elder Babaryka worked for 20 years.

Belarusian authorities on June 15 took control of the bank and arrested more than a dozen top executives on charges of tax evasion and money-laundering.

Analysts said Babaryka could have posed a threat at the ballot box to Lukashenka. His election team said they had collected nearly 435,000 signatures to support his candidacy, a number they said was unprecedented for an independent candidate in Belarus and more than four times the required 100,000 needed to get on the ballot.

Tsikhanouskaya is the wife of a jailed vlogger, Syarhey Tsikhanouski, who also sought to take part in the presidential election.

Tsikhanouski was detained in May and sentenced to 10 days in jail for taking part in an unsanctioned rally in the western city of Hrodna in late-May held to collect signatures for potential presidential candidates, including himself.

He was set to be released on June 8 after completing the sentence but authorities kept him incarcerated and said a day later that he and seven others had been charged with "the organization and preparation of actions that severely violated public order," a reference to the Hrodna rally.

If convicted, Tsikhanouski and the seven others in the case may face up to three years in prison.

On July 1, Tsikhanouski received an additional 15 days in jail for refusing to follow a police officer’s orders during the rallies. He and his supporters have rejected all the charges, calling them politically motivated.

Amnesty International has recognized Babaryka, his son Eduard and Syarhey Tsikhanouski as prisoners of conscience.

Kanapatskaya was one of two opposition candidates elected to the Belarusian parliament in 2016. However, her 2019 bid to seek reelection to the lower house of the country’s largely rubber-stamp National Assembly was struck down by the CEC, which has been led by Yarmoshyna for 20 years.