Four years since Pavel Sheremet’s murder: From ‘a matter of honour’ for Ukraine to any arrests will do? 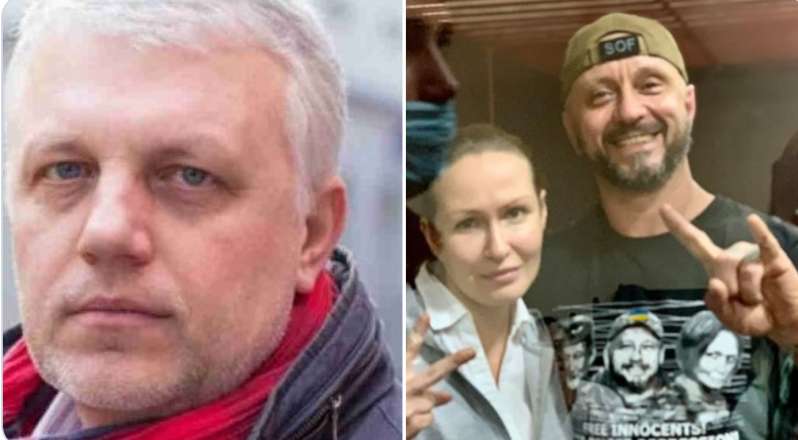 It is four years since 44-year-old journalist and former Belarusian prisoner of conscience, Pavel Sheremet was killed in a bomb blast in the centre of Kyiv.  Finding his killers was declared “a matter of honour” for the enforcement bodies and for Ukraine.  It remains so, however, four years  and three arrests later, there is mounting concern that the wish to report the crime ‘solved’ has resulted in a further terrible injustice.  While the main fear must obviously be that innocent people have been falsely charged and placed in detention, the prosecution’s current version, which has proven disturbingly fluid, also effectively ignores who Pavel Sheremet was, with the suspects accused merely of having wanted to kill ‘a prominent figure’.

Pavel Sheremet had both Belarusian and Russian citizenship, had been imprisoned by the regime of Belarusian leader Alexander Lukashenko and had received international press freedom awards.  He had come to Kyiv in July 2014, after leaving Russian ORT in protest at the virulent warmongering propaganda against Ukraine.  He had been living since then in Kyiv with his partner, Olena Prytula, the former Chief Editor and a co-founder of Ukrainska Pravda, for which Sheremet was working.  Although the police said that they did not exclude the possibility that Prytula, who officially owned the car, had been the target, this seemed fairly unlikely since it was Sheremet who was due at the Ukrainska Pravda studio for a scheduled radio program early on 20 July 2016.

In fact, over the following three and a half years, it had never seemed seriously in question that this had been a targeted assassination of an outspoken journalist who had opposed the regimes under  Lukashenko and Russian President Vladimir Putin, and who had not been timid about expressing his views in Ukraine either.  In 2017, the investigators stated that the main version that they were considering was that Sheremet had been killed because of his journalist work. In January 2017, Anton Herashchenko, then a MP with close links to the Interior Minister Arsen Avakov, asserted that the investigators “are 99.9% sure” that Sheremet’s murder had been organized and carried out by a terrorist centre in Russia.

All of this changed dramatically on 12 December 2019 during a press briefing, broadcast live by many media and addressed not only by Interior Minister Avakov and the Head of Police Ihor Klymenko and his deputy, Yevhen Koval, but also by Ukrainian President Volodymyr Zelensky and the Prosecutor General Ruslan Riaboshapka.

For the reasons why this was a flagrant violation of the presumption of innocence, see:  Ukraine taken to European Court over Sheremet murder trial by press conference .

According to the new version, for which the enforcement agencies were congratulated by the Prosecutor General and President Zelensky, Sheremet had been killed “in order to destabilize the situation in Ukraine”.  A well-known military veteran and musician, Andriy Antonenko (‘Riffmaster’), was claimed to have organized the crime and to have sought out people to carry it out. He was also supposed to have been the man, recorded by CCTV cameras, walking with the woman seen placing the explosive device under Sheremet’s car.  The woman was alleged to be Dr Yulia Kuzmenko, a paediatric surgeon and also a military volunteer.  She was also accused of having detonated the explosive device.  Yana Duhar, a young military nurse, was accused of having photographed the area in advance to inform on video cameras, etc.

It was claimed during this briefing that Antonenko and Kuzmenko had been identified as the people on the CCTV footage by various experts, including a British man called Ivan Birch, who is supposed to be an expert on ‘gait analysis’.

Slidstvo.info got hold of some of the reports and within days had seriously questioned whether these expert assessments had been so categorical.  It will presumably become clear in court how the expert assessments were obtained and what information was provided.

The need for this seems acute since Antonenko is around 10 cm. taller than the estimated height given in two expert assessments of the CCTV footage in 2016.  It also became clear during a detention hearing on 16 July 2020 just how much taller Antonenko is than Kuzmenko. For an uneducated eye, the CCTV footage (of the real perpetrators) seems to show a man and woman of roughly the same height.  Two expert assessments in 2016 did find that the man was taller, however the difference was considered to be 5-6.5 cm.  Kuzmenko is significantly shorter than Antonenko (probably around 15 cm or more).  It is difficult to understand how a person’s assessment of gait, especially given the blurred CCTV footage, could override something so apparently indisputable as height differences, yet both Antonenko and Kuzmenko remain in custody almost eight months after their arrest.

This is also despite radical changes in the indictment, including the following:

Antonenko was alleged to have organized the crime “Seized by ultra-nationalist ideas, cultivating the supremacy of the Arian race, the division of society on the basis of ethnic identity, wanting to make his views the object of public attention and carrying out his actions in order to draw the public’s attention to certain political beliefs… he decided to create an organized group in order to carry out the murder of journalist and radio presenter Sheremet”.

This may have been discarded because of its obvious absurdity, as Antonenko is himself half-Jewish, but it seems more likely that it was because the prosecution got caught red-handed, having copy-pasted this ‘motive’ from an indictment against another person altogether, back in 2015.

It is now hard to understand what the motive was at all, either for the unidentified individuals who are supposed to have planned the crime, or for the three defendants who are alleged to have carried it out.

The indictment apparently now reads that “unidentified individuals, acting for personal motives, decided to carry out an extremely high-profile event in society in order to provoke numerous acts of protest”.   It is not clear why Sheremet’s unexplained murder should have been expected to do this, and it did not.

Antonenko is no longer accused of having organized the killing, but merely of carrying it out.

Not only are the alleged organizers now unidentified, but so too is the person supposed to have detonated the device with Kuzmenko now only accused of having planted the bomb.

During the December press briefing, five people, all military volunteers, were mentioned as suspects, although even then it was not entirely clear how Inna and Vladyslav Hryshchenko, who had been arrested earlier over a failed attack, involving a car bomb, in the Ivano-Frankivsk oblast,  were supposed to be involved in the Sheremet case.  The police asserted only that the explosive devices in the two cases had been similar and also spoke, rather vaguely, about their DNA traces having been found on an explosive device. It was never actually stated which explosive device was meant, however the press briefing was about the Sheremet killing.  According to Leonid Maslov, a lawyer involved in Antonenko’s defence, it later turned out that there was scarcely any similarity between the two explosive devices and there was no identifiable DNA on the Ivano-Frankivsk explosive.  There was also nothing to connect the Hryshchenkos with any of the defendants in 2016.  It was Hryshchenko, as well as an act of sabotage in the Kherson oblast which Antonenko was not involved in that the police said had set them on the latter’s track. During the press briefing, all of this created the impression that the police had vast amounts of proof which certainly does not appear to be the case.