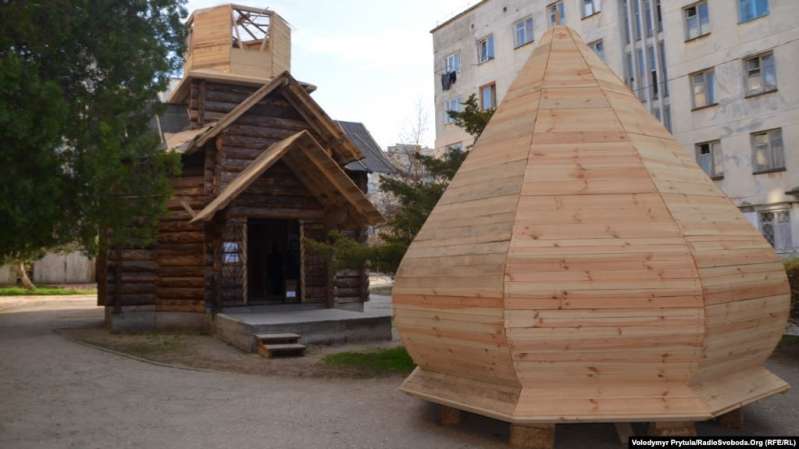 The Archbishop received the document from the so-called Crimean bailiffs’ service on 23 July.  This states that if the church, occupying a merely 30 m², is not removed within this time, criminal proceedings could be brought against the Archbishop under Article 315 of Russia’s criminal code (failure to implement a court sentence, court ruling or other court act).  The document itself is dated 15 May 2020, and asserts that the Crimean Diocese of the Orthodox Church of Ukraine must, within a month from when the court ruling comes into force demolished the church in question.

The move to get the church removed came from the Russian occupation authorities in Yevpatoria.  The Archbishop points out that construction of the church began before 2014 (and Russia’s annexation) and that the Church has all the relevant documentation. The Russian occupiers are claiming this is not the case. The original order was issued in November 2019.

Russia’s persecution of the Ukrainian Orthodox Church began soon after its invasion and annexation.  Moscow presumably understood that open repression by the occupation authorities (as opposed to the attacks on churches and their believers by the Russian and pro-Russian armed paramilitaries) could lead to further sanctions.  It focused therefore on onerous and, in many cases, unacceptable demands that religious communities re-register under Russian legislation, and on depriving the Church of its land and places of worship. The Russian occupiers claimed that the land, which, under Ukrainian law, was the property of the Autonomous Republic of Crimea, was ‘federal Russian property’ which the Archbishop was illegally occupying.

In just the first year after annexation, 38 out of 46 parishes ceased to exist.  Of 25 priests in 2014, only four remained by the end of 2018.  The last five to have left did so after searches of members of the Ukrainian Cultural Centre and mounting difficulties created for people without Russian citizenship.

In at very least three cases, churches were seized by the occupation regime:  in Sevastopol; Simferopol and in the village of Perevalne. The Church, helped by lawyers from the Ukrainian Helsinki Human Rights Union and the Regional Centre for Human Rights, is currently involved in four legal suits with Russia over property that has been illegally appropriated, or, as in the case of the Cathedral of Saints Vladimir and Olga in Simferopol, is still trying to steal and plunder.

The battle to seize control of the Cathedral of Vladimir and Olga began soon after Russia’s invasion and has continued, with Klyment even attacked during a raid on the Cathedral in which crosses and icons were seized (details here).. This is partly a move aimed at seizing a major site in Simferopol, which Klyment has said he was almost immediately after annexation offered 200 thousand USD to vacate.  Since he, obviously, refused, the occupation regime used trumped-up pretexts for its plunder. It is also, however, part of the aggressive offensive against the Ukrainian Church in Crimea and against Klyment himself.

All Russian-controlled ‘courts’ in Crimea had provided the rulings that Russia required, however in September 2019, Moscow ran up against a first hurdle when the UN Human Rights Committee stepped in, applying its Rule 94 as an interim measures to halt the eviction of the congregation from the Cathedral (details here). In March 2020, Ukraine’s Cabinet of Ministers also adopted a belated, but important, decision placing the Cathedral under state ownership.  The move can be used as an instrument, with Ukraine calling upon its partners in the world and international organizations to defend Ukraine’s Cathedral and its believers from the occupiers. It is one that Archbishop Klyment has long called for.  As he explained: “We’re often asked what this resolution will give us.  In the first instance, the responsibility for the state for Ukrainian citizens who have remained in Crimea. At present, all the responsibility is upon me – for the church, the Diocese, the priests, the Ukrainian citizens who cannot leave Crimea, but live in spirit with Ukraine.”

He went on to say that once the resolution had been affirmed by parliament, it would  be possible to develop a specific algorithm for countering attempts by the Russian occupation regime to take the Cathedral away.  Before he and his congregation had had to fight for survival alone – now they would have the Ukrainian state and the international community on his side.