Investigation of individual terrorist crimesKey insurgent admits there was no civil war, just Russian aggression A brief description of the KHPG strategic litigations in July–December 2020Ukrainians forced to take Russian citizenship, or lose their homes in occupied Crimea The practice of application of Article 111 of the Criminal Code of UkraineMPs challenged to fight Russian repression by adopting a Ukrainian political prisonerSavagely beaten Maidan activist Tetyana Chornovol formally charged with a non-existent murderCriminal proceedings under Article 111 of CC of Ukraine against the journalistsRussia passes grotesque 19-year sentence against head of Crimean Tatar TV ATRExpert opinion (Amicus Curiae) on the application and interpretation of the case-law of the European Court of Human Rights in criminal proceeding № 52017000000000361Crimean children taught that Russia didn’t invade Crimea and that Ukraine was an accident19-year sentence demanded against Crimean Tatar businessman for wanting Russia out of CrimeaNew offensive against wife of Crimean prisoner of conscience sentenced to 12 years for converting to IslamRussia sentences Ukrainian political prisoner to 10 years after abducting him from DonbasUkraine charges judges with treason over persecution of Crimean Tatar Mejlis leader Ilmi UmerovRussia instils ‘patriotism’ in occupied Crimea with automatic rifles and propagandaForcibly disappeared Crimean Tatar activist ‘summoned’ to appear at Russia’s grotesque trial of Mustafa DzhemilevCourt in Ukraine revoke’s Yanukovych’s arrest warrant over Maidan killingsOpinion on the political motives of criminal persecution and violation of human rights in the case of Sergiy PashinskyRussian-installed Crimean leader praises FSB for terrorizing Crimean Tatars
• Topics / Human Rights Abuses in Russian-occupied Crimea 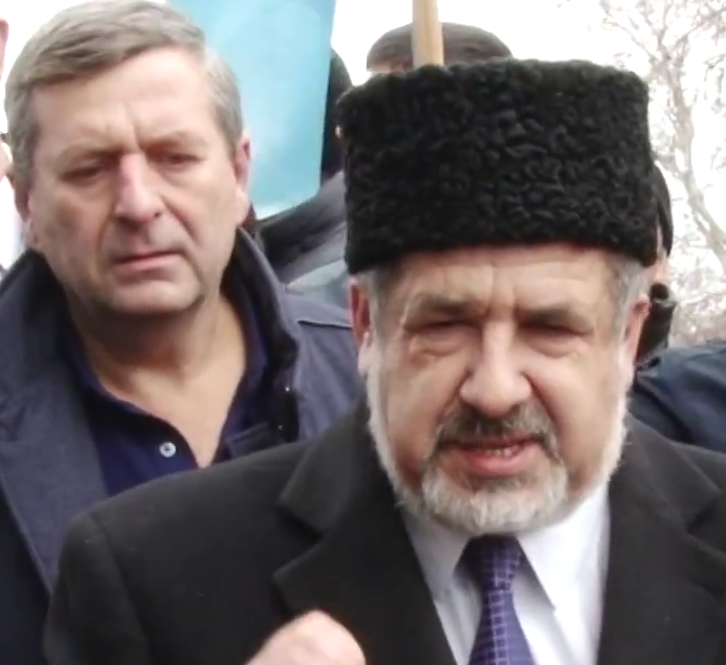 The Russian-controlled High Court in occupied Crimea has added unseemly haste to the many other absurd aspects of Russia’s ‘trial in absentia’ of Crimean Tatar Mejlis leader Refat Chubarov.  It is unclear whether the removal of Chubarov’s lawyer Nikolai Polozov has emboldened the court to abandon any imitation of a real justice system, or whether the court genuinely fears that Polozov’s appeal against his removal may be successful. It is certainly hurtling through proceedings, with a staggering 16 supposed ‘victims’ and prosecution witnesses  questioned on 27 July in the presence only of a state-appointed lawyer.  Polozov notes that such speed is needed when trying to catch fleas.  It is less appropriate “when imitating the exercising of justice”.

Russia’s Investigative Committee announced at the end of March 2020 that it was charging the leader of the Mejlis, or self-governing body of the Crimean Tatar people, under two articles of Russia’s criminal code.  The extraordinary charge of ‘public calls to carry out action aimed at violating Russia’s territorial integrity’ (Article 280.1 § 2) is probably the old charge, first announced in October 2015.  Back then, the occupation authorities actually claimed that they would be “demanding Chubarov’s extradition” after having themselves banned him from native Crimea.  This was mere noise for local consumption, since neither Ukraine, nor INTERPOL would support Russia’s attempts to prosecute Chubarov for demanding, as do all international bodies and democratic states, that it end its illegal occupation of Crimea.

It is the other charge where Polozov is clearly viewed as a major obstruction, and with cause.  Having received international condemnation for its politically-motivated imprisonment and ‘trial’ of Chubarov’s Deputy, Akhtem Chiygoz, Russia has now effectively brought identical charges against Chubarov himself.  The demonstration, organized by the Crimean Tatar Mejlis, on 26 February 2014 almost certainly foiled Russia’s attempts to carry out a coup without openly deploying Russian soldiers.  The attempt to claim that this was a mass riot and use it to imprison Mejlis leaders is, however, fundamentally flawed, and not only because of the legal nihilism of laying charges under Russian legislation over an event that took place on Ukrainian territory, under Ukrainian law.

Russia’s rehashing of these charges is simply exposing yet again the machinations behind its invasion and annexation of Crimea.  Back in February 2014, having learned that certain pro-Russian politicians, with Russian FSB backing, were planning to push through a thoroughly illegal move to change Crimea’s status, the Mejlis called on Crimean Tatars and all other Ukrainians to gather outside the Crimean Parliament on 26 February.  The Ukrainian authorities had been informed of the planned demonstration, and of a smaller pro-Russian demonstration, which was all that was required under Ukrainian law.

Chiygoz was arrested on 29 January 2015, with two other Crimean Tatars – Ali Asanov and Mustafa Degermendzhy – both also imprisoned for two years on provably false charges over the demonstration.  Eight people, counting Chiygoz, were prosecuted – all of them Crimean Tatar, with the supposed ‘witnesses’ in the case being people who had taken part in the pro-Russian demonstration.

Chiygoz was brilliantly represented by Polozov who tirelessly demonstrated the political nature of the ‘trial’, and made it public after the occupation authorities prevented Chiygoz from being present at his own ‘trial’.  It was thanks to Polozov’s efforts, that a number of inconvenient details were revealed about Russia’s ‘operation’.  These included the accidental admission that among those present at the pro-Russian part of the demonstration were the so-called ‘private military company’ Black Sea and a paramilitary Cossack organization from Sevastopol.  It is believed, from the testimony of many witnesses, that it was after a large group of men arrived on coaches from Sevastopol and joined the pro-Russian demonstrators, that the pro-Russian side began behaving more aggressively (details here).

Russia went through with this shameful ‘trial’ to the end, with Chiygoz sentenced on 12 September 2017 to 8 years’ imprisonment, and five Crimean Tatars, including Asanov and Degermendzhy, receiving suspended sentences.  Chiygoz and another persecuted Mejlis leader, Ilmi Umerov, were both released into exile on 25 October 2017, in a deal negotiated with the help of Turkish President Recep Tayyip Erdoğan.  It now appears that the two men were in fact exchanged for two suspected Russia state killers, accused of at least one political killing in Turkey (details here).

Russia has for over three years flouted an order from the UN’s International Court of Justice to revoke its ban of the Mejlis, and will hopefully be found by that same court to be in flagrant violation of the International Convention on the Elimination of All Forms of Racial Discrimination over its treatment of Crimean Tatars and ethnic Ukrainians in occupied Crimea.

In this new prosecution, Russia obviously understands how much it needs to conceal and is trying to prevent Polozov from taking part in the ‘proceedings’.

It is harder to understand why the occupation authorities have embarked on this remake of an evidently lawless and, essentially, racist trial.