More Than 1,000 Detained In Belarus As Protesters Face Tear Gas, Stun Grenades, BeatingsBelarus: Savage attack and possible 3-year sentences against journalists reporting March against TerrorBelarusian Police Detain More Than 90 As Protests Enter 11th WeekBelarus threatens to use lethal force against protesters as pensioners march for freedomHow post-election protests are creating a new Belarus’We’re Belarusians, Not A Russian Region’: Protests Take Aim At KremlinLukashenka returns Donbas mercenaries to Russia, others, reportedly, on their way to BelarusBelarusian museum director who refused to sign false election protocol found deadLukashenko regime’s savagery may be backfiring in BelarusBelarus initiates ‘mass riot’ criminal charges against detained Ukrainian rights activistsBelarusian Opposition Presents Broadest Challenge Yet To Strongman Lukashenka After Disputed ElectionBelarus: ‘I appeal to all Europe: Please help us, because they’re killing my family’Belarus: Peaceful protester killed in violent crackdown after claimed Lukashenko victoryWhy were Wagner fighters from Russia seized in Belarus and can Ukraine get them extradited?State Media Vs. The Streets: How Lukashenka Lost The Media War In BelarusTop Lukashenka Challenger Babaryka Barred From Belarus’s Presidential ElectionBelarusian Vlogger Gets Another 15 Days In Jail As He Awaits Criminal ChargesAI condemns purge on bloggers & activists ahead of presidential elections in BelarusUkraine’s Security Service abducts and deports former political prisoner to BelarusBelarusian Lockdown: Independent Journalists Decry Draconian Repression
• Topics / News from the CIS countries

State Media Vs. The Streets: How Lukashenka Lost The Media War In Belarus 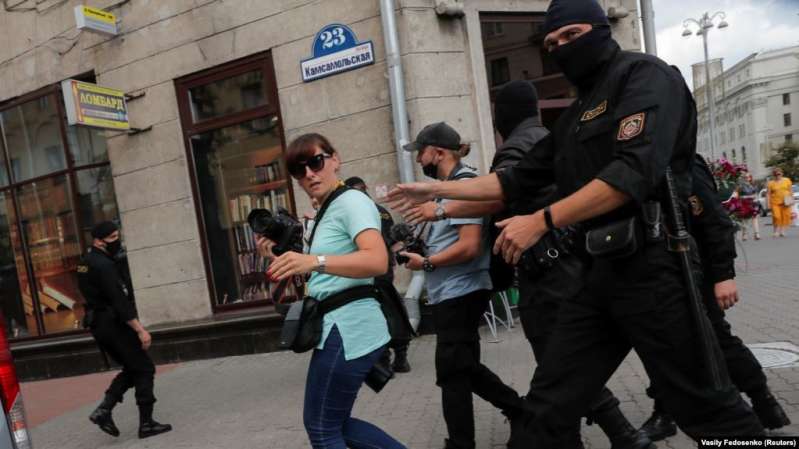 Law enforcement officers are shown detaining journalists in a photograph taken by a Reuters photographer just moments before his own detention in Minsk on July 28.

Coronavirus cases continue to rise, with many Belarusians blaming his refusal to order lockdowns, and he announced on July 28 that he had weathered a case of COVID-19 himself. The economy is in trouble, exacerbated by the tense ties with Moscow and reduced supplies of the subsidized Russian energy he has long relied upon.

The political picture also looks unpleasant for Lukashenka. His standing is shaky enough that a candidate, Svyatlana Tsikhanouskaya, who has no government experience and was virtually unknown just months ago, is now drawing thousands of people to rallies at towns and cities across the country. Belarusians appear electrified by her message of change, prompting analysts to ponder how long Lukashenka’s rule, which dates back to 1994, can last.

Still, there’s at least one place where Lukashenka appears to be in control and where he is as popular as ever: state-run media.

Belarus 1, the country’s main state-controlled TV channel, earlier this month highlighted an opinion poll that showed Lukashenka far out in front of the four others allowed on the ballot, with 69.4 percent. And Tsikhanouskaya, the political upstart who seems to have tapped into rising discontent? She polled at just 2.2 percent.

The survey was quickly ridiculed on social media and on independent news sites whose own polling results have led to a mocking nickname for Lukashenka that has taken off as an opposition meme: “Sasha 3 percent.”

For Lukashenka -- who has sometimes been called “Europe’s last dictator” and is also its longest-serving leader, in power for 26 years -- media outlets outside the state-controlled stable are largely treated with suspicion or contempt.

He recently lashed out at some foreign media, including RFE/RL, arguing that their correspondents’ coverage was fomenting “mass disturbances” – a claim RFE/RL’s acting president called “outrageous” -- and that they should be expelled.

"The Belarusian authorities consider the foreign and independent media as well as new social media in Belarus part of the problem,” said Arsen Sivitski, director of the Minsk-based Center for Strategic and Foreign Policy Studies.

While many older Belarusians may still get their news from state media, younger generations are relying more and more on social media and online independent sites, observers and experts say.

And those sources are far from loyal, let alone fawning, when it comes to Lukashenka. Compounding his media woes ahead of the election: Russian outlets, which have a large audience in Belarus, have highlighted the COVID-19 crisis that critics say he brought upon the country.

Nadia Buka, an artist, illustrator, and magician, also has journalist on her eclectic resume. Buka was a journalist at Belarusian state-run Capital TV (CTV) until she got fed up and left years ago.

She said “nothing has changed” at state media outlets since the Soviet days when blatant propaganda was the norm.

“The Soviet Union has survived on television. It’s the same as it was 10 years ago, 20 years ago," Buka told Current Time, the Russian-language network led by RFE/RL in cooperation with VOA. “Practically nothing has changed.”

“Unfortunately, people who are 65 and above watch TV here, and, unfortunately, they don’t use the Internet, and therefore they believe the propaganda coming from their screens,” she said.

Besides pumping up perceptions of Lukashenka’s popular support, state media in Belarus have downplayed the impact of the coronavirus pandemic, which the president dismissed in March as the product of a “mass psychosis.”

Russian state media, meanwhile, offered critical reporting of the pandemic in Belarus. In May, Minsk got so fed up that it stripped two Russian journalists of accreditation after accusing them of spreading “false information” in their coverage of the coronavirus pandemic in Belarus.

Relations between Minsk and Moscow have been tense since Lukashenka balked last December at plans for deeper integration with Moscow. Russia then decreased energy supplies to Belarus, which depends on cheap gas and oil to run much of its inefficient, state-run economy.

Amid this simmering feud, Russian state media outlets provided not only negative coverage of the Belarusian authorities but also a “platform for opposition candidates,” according to Savitski.

Meanwhile, Belarusians whose day-to-day experiences made them question the official line on COVID-19 appear to have turned away from state media in search of accurate information, said Nika Aleksejeva, a digital researcher at the Atlantic Council’s Digital Forensic Research Lab (DFRLab).
“The cognitive dissonance between what Belarus state channels were saying and how people viewed the situation ‘on the ground’ and elsewhere may have facilitated increased consumption of alternative information sources, including Belarusian vloggers” like Tsikhanouskaya’s husband, Syarhey Tsikhanouski, Aleksejeva told RFE/RL in e-mailed comments.

Tsikhanouskaya entered the presidential race after her husband’s bid to get on the ballot was rejected by the authorities. He is now in jail.

’They Will Never Hear The Truth’

For many younger Belarusians -- especially members of the “Lukashenka generation” who have known no president other than the former Soviet state farm chief whose domineering style has earned him the nickname Batka (Father) -- online media are the choice for news and information, Buka said.

“Modern society…understands what is going on, they all watch online channels, independent media,” Buka said, referring to younger and more progressive citizens.

“Everyone already understands perfectly well they will never hear the truth coming from TV screens,” she said.

Lukashenka’s would-be challengers – including several top opponents who were not allowed to run – have used social networks such as Facebook, Twitter, and Instagram to get their message out.

Tsikhanouski has some 250,000 subscribers to his YouTube channel, A Country For Living, which shines a spotlight on alleged graft and corruption in Belarus.

Viktar Babaryka, the top potential rival to Lukashenka until his arrest on embezzlement charges that backers dismiss as politically motivated, has over 300,000 followers on Instagram. Social-media efforts helped his campaign gather hundreds of thousands of signatures in support of his candidacy in the nation of less than 10 million people.

For activists and a growing number of other Belarusians, social media has become not only a tool to organize but to vent anger and frustration with Lukashenka and his government’s repressive ways.

DFRLab recorded an uptick in such posts around June 18, when Babaryka and his son were detained on embezzlement charges that he and supporters dismissed as trumped up.

“I cannot call myself a person who is interested in politics,” wrote Yekaterina, who identified herself as an animal rights activist. “When I look at you, I do not feel anger or disgust, I feel shame.”

A Facebook user named Dima Naryshkin who identified himself as a comedian, addressed Lukashenka in a post, writing: “Aleksandr Grigorevich, you are #notmypresident.”

With their influence growing, bloggers, independent journalists, and activists have been targeted by the Lukashenka government with arrests and intimidation.

“The Belarusian authorities are carrying out a full-scale purge of dissenting voices, using repressive laws to stifle criticism ahead of the elections.… Now those active on social media are being targeted,” said Aisha Jung, Amnesty International’s senior campaigner on Belarus.

Overall, the government has detained some eight YouTube and Telegram bloggers who advocated or disseminated views critical of Lukashenka’s policies.

“The government reacts like this to bloggers and Telegram channels because it’s afraid that the country’s population is becoming more informed about what’s going on in the country right now,” Losik’s wife, Darya, contended.

More than 40 journalists have been arrested during the past 2 1/2 months of election campaigning, but the prosecutor-general announced on July 24 that he would not investigate the way their reporting had been obstructed.
Sivitski suggested that Lukashenka is likely to continue seeking to silence inconvenient voices as he struggles with a changing media landscape.

With reporting by RFE/RL’s Belarus Service and Current Time