“Mama, have they come to kill us?” Russia’s new-old terror and deportation of Crimean TatarsRussia reduces horrific sentences against five Crimean Tatar political prisoners by all of 6 monthsCrimean Tatars sentenced to 12 and 17 years on ‘terrorist charges’ without being accused of a crimeFive Crimean Tatars sentenced to 68 years for peacefully practising their faith in Russian-occupied CrimeaDangerously ill political prisoner gets limited treatment. Torture in Crimean prison continuesCrimean Tatar political prisoner with dangerous Covid-19 symptoms thrown into punishment cellCrucial victory for Ukraine in ECHR case against Russia over Crimea Why would Russian Wikipedia censor information on the Donetsk Izolyatsia secret prison?Crimean Tatars sentenced to 18, 17 and 13 years for discussing their faith and Russian persecution 2020: There was no worse year in the realm of human rights after the Revolution of DignityBandera. An Invitation to a Calmer ConversationMass detention of Crimean Tatars travelling to political trial in Russia Investigation of individual terrorist crimesKey insurgent admits there was no civil war, just Russian aggression Next, Russia will come for the children Abducted, tortured and spending seventh Christmas in Russian solitary confinement Russian-controlled militants sentence 70-year-old pensioner to 17 years for ‘spying’ after torturing him and his familyA brief description of the KHPG strategic litigations in July–December 2020Ukrainians forced to take Russian citizenship, or lose their homes in occupied Crimea Lukashenko plotted to kill Sheremet yet Ukraine has charged people with no motive for his murder
• Topics / Implementation of European Law
• Topics / Human Rights Abuses in Russian-occupied Crimea 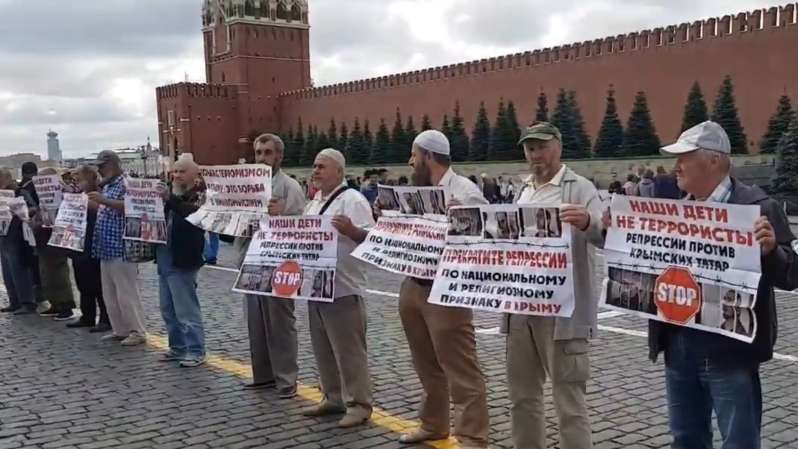 By imprisoning virtually all Crimean political prisoners in Russia, often thousands of kilometres from their homes, The Russian occupiers are not only persecuting Crimean Tatars and other Ukrainians for their religious or political views, or for their civic activism, but are devastating the lives of entire families  The morning that armed and masked men terrorize small children and take their fathers away can literally be the last time they see them for years.  Or forever – the elderly parents of several political prisoners have died without being able to bid farewell, and with their sons prevented from even attending their funeral.

This is not just unspeakably brutal, but also in flagrant violation of international law.  Russia is an occupying state, and as such has no right to move any prisoners from Crimea.  This was clearly stipulated in the Second Report of the UN Secretary-General on the human rights situation in Crimea (covering the second half of 2019). presented on 2 July 2020 by the UN High Commissioner on Human Rights, Michelle Bachelet.  According to international humanitarian law, any person accused of a crime should be detained in the occupied territory, and any sentence should also be served there.  The Fourth Geneva Convention, for example, prohibits “individual or mass forcible transfers, as well as deportations of protected persons, from occupied territory to the territory of the occupying Power, or to that of any other country, occupied or not, regardless of their motive”.  In this part of the report,  no distinction was made between people arrested on politically motivated charges, or others, including prisoners who were already serving sentences when Russia invaded and annexed Crimea.”   Russia ignored their wishes and international law, moving prisoners often so far from their homes that there really was no realistic chance of family visits.

As reported, most transfers are long and arduous, with prisoners held along the way in appalling conditions and with no ability to contact their families or lawyers.  The conditions in all Russian SIZO and, to a lesser degree, prison colonies, are bad, and it does seem likely that even worse treatment has been used, for example, against Crimean Tatar political prisoners as a form of pressure.

Russia is trying to treat Crimea as though it was a part of Russia and ‘like any other’.  In fact, Russia has also been found in violation of Article 8 of the European Convention on Human Rights (the right to family life) through its imprisonment of Russians very far from their homes.  The European Court of Human Rights would doubtless find similar violations in the case of Crimeans, however in their case Russia has no right to imprison them according to Russian legislation at all, and certainly not outside Crimea.

The report referred to eight documented cases, however the details mentioned have applied in the cases of all political prisoners we are aware of.  While sometimes (although not always) family members have had the chance to see the political prisoner, neither the prisoners themselves, nor their lawyers and families ever know which prison they are being sent to.  Given the brutality of Russian enforcement and penitentiary bodies, this can mean weeks of anxiety.

The report notes that in some cases, relatives were only able to visit a detainee for the first time a year after their arrest.  It should be stressed that there will also be limits on such visits, meaning that there may be terrible decisions that need to be made as to whether a wife can see her husband, or his elderly mother.  This is true even while political prisoners are held in Crimea, with children in particular almost never admitted.  This was the reason why family members would hope to attend court hearings, and children would wait in court corridors or outside in the hope that their fathers would be brought by.  The occupation regime then began cracking down on this as well, with even detention hearings often held behind closed doors, for absolutely no good reason.

Roman Martynovsky, a lawyer from the Regional Centre for Human Rights, and himself from Crimea, told Krym.Realii that he believes there could be thousands of Crimeans who have been illegally moved to Russia, and not the much more modest number that the report mentions.  In 2016-2017 alone, he says, they submitted information to the International Criminal Court’s Office of the Prosecutor regarding the transfer of around 200 people. These were merely the people that they were able to identify, however they estimate that in the years since annexation, more than nine thousand prisoners have been illegally moved to Russia.

Russia’s moving of prisoners can, Martynovsky states, be classified as a war crime. He cites Article 8 of the Rome Statute of the International Criminal Court.  Among the acts which are specified as ‘war crimes’ are (vi)  Unlawful deportation or transfer or unlawful confinement.  Martynovsky adds that in a sense such a move can be viewed as a crime against humanity.

Russia is ignoring all of this, however the International Criminal Court’s Office of the Prosecutor determined back in 2016 that Russia’s occupation of Crimea constitutes an international armed conflict.  Neither ICC, nor any other international body is in any doubt that Russia is an occupying power and that it is in grave violation of its international obligations.

Russia has no right to foist its citizenship on any Ukrainian, prisoner or not, nor to forcibly move them to Russia.  Since annexation, it has made it next to impossible for people to live in Crimea without taking Russian citizenship. It is now using this citizenship as an excuse to block any release of Ukrainian political prisoners and, usually, to prevent them from receiving visits from the Ukrainian consul.

While a few political prisoners, such as Volodymyr Dudka and Viktor Shur, are at least imprisoned close enough to make visits realistic, the fate of most  Crimean Tatars illegally imprisoned on fabricated charges is tragic.  Men with small children are sent as far away as Bashkortostan (or Bashkiria), making it next to impossible for families who have been deprived of the main breadwinner to even visit them.  The prison administrations also regular fabricate supposed infringements in order to hold the men in punishment cells and deprive them of the right to family visits, parcels, etc.

Teymur Abdullayev and his brother Uzeir are both trained lawyers and Ukrainian sports champions.  Both are now recognized political prisoners, serving horrific sentences (16.5 years and 12.5 years, respectively).  Both were subjected to particularly brutal treatment in occupied Crimea, and this has continued since.  Teymur Abdullayev  was thrown into a punishment cell on his arrival at the prison colony in Bashkortostan and appears to still be there.

Please write to the political prisoners!  All letters are an important message both to them and to Moscow that the men are not forgotten.

For information about the mounting number of Ukrainian political prisoners, please see: