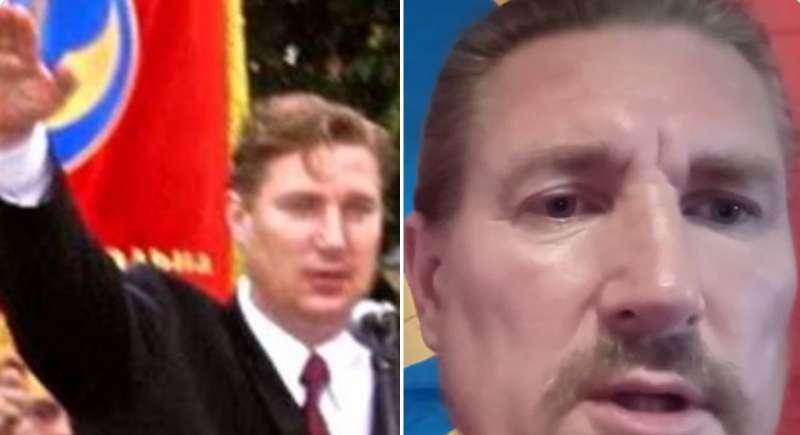 Edward Kovalenko has returned to the Kherson oblast seven months after his release was demanded by the Russian-controlled militants in Donbas as part of the 29 December exchange of prisoners  Russia’s concern for a person apparently linked with a far-right Ukrainian nationalist party that is banned in Russia raised eyebrows then, but so too does the ease with which Kovalenko now seems set to campaign in the local elections on a platform that echoes the Kremlin narrative about the war in Donbas and about Ukraine in general.

Judging by the first interviews Kovalenko gave after being handed over to the so-called ‘Luhansk people’s republic’, his history was intended to begin in 2014/2015 with his active campaigning ‘for peace’ and opposition to Ukrainian mobilization in the face of the Russian armed, manned and funded military conflict in Donbas.  In such interviews, he expressed the view that Russians, Ukrainians and Belarusians are all one people, and praised the Russian proxy ‘Donetsk and Luhansk people’s republics’ as having “defended their independent republics”.  This is broadly the platform of his ‘SPAS’ or Socio-patriotic assembly of Slavs, party which has as its motto “Slavs of all countries, unite!”

The plan went wrong after Dennis Kazansky and other Ukrainian journalists pointed out Kovalenko’s ‘Ukrainian fascist’ past and Kovalenko was forced to essentially admit that he had acted as a provocateur back in 2004 when he used obvious Nazi rhetoric and a Hitler salute in a march claiming to be in support of presidential candidate Viktor Yushchenko.  His story is always very blurred, but this is probably not surprising since the dramatic transformations in his ‘ideology’ force the conclusion that he has continued to provide services as a provocateur, and almost certainly to the same paymaster.

Kovalenko is described by Kazansky as having been one of the leaders in the 1990s of the far-right nationalist UNA-UNSO [the Ukrainian National Assembly – Ukrainian People’s Self-Defence].  Ironically, he appears to have come to particular prominence in 2002 after the arrests and imprisonment in 2001 of many genuine nationalists, like Mykola Karpyuk, who 13 years later was to become one of Russia’s first Ukrainian political prisoners.  In 2002, UNA-UNSO collapsed into several breakaway groups. At that point, Kovalenko created his own apparently far-right group, UNA (Kovalenko).  It was this organization, Kazansky notes, that represented the true fascism which Russia uses “to frighten children and credulous pensioners with”. Unlike all the other Ukrainians whom Russia calls ‘fascists’ for upholding Ukrainian independence, and speaking Ukrainian, Kovalenko had the advantage of genuinely appearing to fit the fascist mould.

The photos, of  were certainly damning enough for anybody wanting to discredit Ukraine and Viktor Yushchenko, whom Kovalenko vocally supported.  It is clear from the reports at the time that Kovalenko was recognized as a provocateur.  On 26 June, 2014, for example, Ukrainska Pravda wrote that “UNA provocateurs with SS symbols, want to support Yushchenko and do not exclude street battles”  Kovalenko’s speech was obviously intended to echo Nazi rhetoric (“One Ukraine, one nation, one people, one president”) with a Nazi salute for the cameras.

Two days later, UNA-UNSO, led by Andriy Shkil, issued a statement condemning the provocateurs and saying that the march had been organized (and obviously financed) by Viktor Medvedchuk, who was then the Head of Leonid Kuchma’s Presidential Administration.  Medvedchuk was and remains a close associate of Russian President Vladimir Putin who very openly, as well as covertly, supported Kuchma’s intended successor, Viktor Yanukovych.  Medvedchuk now controls at least three major Ukrainian media, and his party in parliament has a pro-Russian position.

As reported, Kovalenko was sentenced to five years’ imprisonment in May 2017 for obstructing the legitimate activities of Ukraine’s Armed Forces and other military formations (Article 114-1 of the Criminal Code).  The charges pertained to an anti-mobilization rally which he organized on January 27, 2015.  During the rally, he issued an ultimatum, threatening that, if mobilization did not stop in Ukraine, the protesters would block roads and seize control of the military recruitment office, police and administrative buildings.  Kovalenko was only taken into custody in the courtroom and had probably not been expecting a prison sentence.

He had certainly been active during the period between the charges being laid and his arrest.  In November 2016, he was reported as being behind a petition to Sergei Aksyonov, installed as Crimean leader by Russian soldiers in February 2014, with Aksyonov in turn writing to Putin with a request to ‘help Henichesk with gas’.

In July 2016, he was directly implicated in the fabrication of a supposed demand from local Ukrainian Bulgarians for a Bulgarian autonomy.  The report from July 4, 2016 was entitled ‘Ukraine’s Bulgarian diaspora demands territorial autonomy from Poroshenko and attached a letter allegedly signed by Yury Palichev, who in the report itself is described as one of the leaders of the Bulgarian diaspora.  In one of the questionable reports, Kovalenko claimed that Palichev had “dared” to write such a letter and was now facing persecution.  He said that he had spoken personally to Palichev, although the latter told the author that he had never heard of either Kovalenko or the letter he was supposed to have written (details here).

It seems likely that Kovalenko will be a little more circumspect in his public statements now that he is back in government-controlled Ukraine, and avoid the lavish praise he showed while in occupied Luhansk on the so-called ‘republics’.  He is, however, very clearly pushing Moscow’s narrative both about the conflict in Donbas (‘fratricidal’) and in pushing for equal status for the Russian language in Ukraine.  He expresses surprise himself that his ‘one Slavonic nation’ SPAS party has not been banned.  Kazansky is even more scathing on this subject, and extremely critical of the SBU [Ukrainian Security Service] for doing nothing.

It is not necessarily clear what they can do at this stage, but there is certainly a noticeable difference.  No Ukrainian political prisoners or Donbas hostages could possibly re-enter occupied Donbas or Crimea, or travel to Russia.  Kovalenko, on the other hand, who described at length (though not in detail) the ill-treatment and persecution he was allegedly subjected to in government-controlled Ukraine, has returned and clearly believes he can safely make his political plans publicly known.