Belarus: ‘I appeal to all Europe: Please help us, because they’re killing my family’Belarus initiates ‘mass riot’ criminal charges against detained Ukrainian rights activistsBelarusian Opposition Presents Broadest Challenge Yet To Strongman Lukashenka After Disputed ElectionBelarus KGB arrest journalist who identified the Ukrainian Berkut helping Lukashenka regime Belarusian Journalists Handed "Absurd" Prison Sentences For Live Coverage Of Anti-Government RallyMore Than 1,000 Detained In Belarus As Protesters Face Tear Gas, Stun Grenades, BeatingsBelarus: Savage attack and possible 3-year sentences against journalists reporting March against TerrorBelarusian Police Detain More Than 90 As Protests Enter 11th WeekBelarus threatens to use lethal force against protesters as pensioners march for freedomHow post-election protests are creating a new Belarus’We’re Belarusians, Not A Russian Region’: Protests Take Aim At KremlinLukashenka returns Donbas mercenaries to Russia, others, reportedly, on their way to BelarusBelarusian museum director who refused to sign false election protocol found deadLukashenko regime’s savagery may be backfiring in BelarusWhy were Wagner fighters from Russia seized in Belarus and can Ukraine get them extradited?State Media Vs. The Streets: How Lukashenka Lost The Media War In BelarusTop Lukashenka Challenger Babaryka Barred From Belarus’s Presidential ElectionBelarusian Vlogger Gets Another 15 Days In Jail As He Awaits Criminal ChargesAI condemns purge on bloggers & activists ahead of presidential elections in BelarusUkraine’s Security Service abducts and deports former political prisoner to Belarus
• Topics / News from the CIS countries 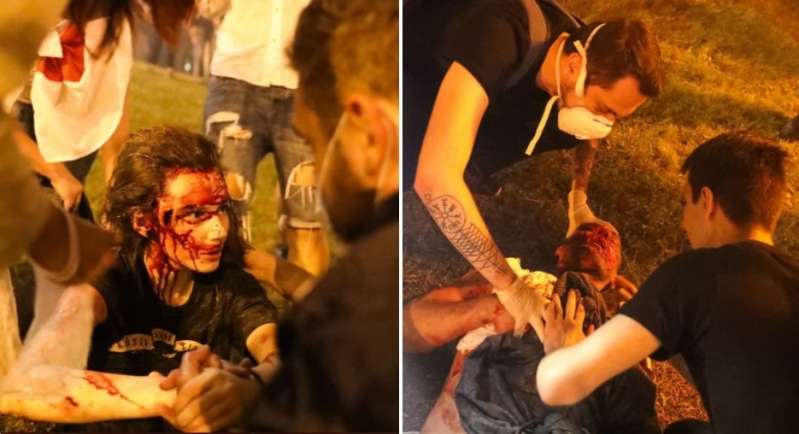 There were scenes of violence late on Sunday evening from the centre of Minsk, with police and military using rubber bullets, stun grenades, tear gas and water cannons at what appeared to be totally peaceful protesters.  A van for prisoners was seen on video footage driving at high speed into a crowd, with one person in a grave condition and at least one other injured.  Independent media also report that protesters have been savagely beaten by police and interior ministry forces.  Agnieszka Romaszewska, Chief Editor of Belsat, reported fairly early in the evening that people were coming out onto the streets in many other places, and that scenes like those in Minsk were being repeated throughout Belarus.  By the early hours of 10 August, Radio Svoboda’s Belarusian Service spoke of people being detained in Minsk; Vitebsk; Hrodno and other cities. There are, however, problems with gaining information as the Internet has been largely or totally blocked in all parts of the country since the voting began, and in the evening electricity altogether was cut off from at least part of Minsk.

Nothing about the events on 9 August, from the deliberate creation of an information vacuum and heavy deployment of military troops to the crackdown after polling stations closed give any grounds for believing that Alexander Lukashenko has genuinely won the near 80% support that the official exit polls claimed.   There were evident attempts to prevent people voting in Kyiv, Warsaw and, reportedly, Moscow.  In Moscow, the huge queue of people hoping to vote chanting “Lukasshenko, go””.  An informal exit poll in the latter city made the reason very clear, with almost 100% support for the one real opposition candidate – Svetlana Tsikhanouskaya.  According to the official exit poll, she gained a mere 6.8% of the votes, something few who saw the unprecedented crowds at her rallies throughout the country would believe.  In fact, there appear to have been a few honest election commissions whose results demonstrate an overwhelming victory for  Tsikhanouskaya.

With Lukashenko, like his Russian counterpart Vladimir Putin, determined to stay put, it is small wonder that some of the images on 9 August, showing huge contingents of riot police in full gear against totally unarmed protesters, were poignantly reminiscent of Ukraine’s Euromaidan protests.  It was also typical that, both in the runup to the election and on 9 August, a number of journalists from Ukraine, Poland and Russia (at least) were detained, with several deported from the country.

According to the Vyasna Human Rights Centre, there have been a huge number of arbitrary arrests, with people being sentenced for supposed administrative offences to terms of administrative arrest or fines.   They calculate that 223 Belarusians have been sentenced to well over three thousand days detention, while 1,362 were unwarrantedly detained.

Vyasna and the Belarusian Helsinki Committee have both said that the election campaign took place against a background of relentless repression.  It is typical in this respect that Svetlana Tsikhanouskaya became a presidential candidate only after her husband, Sergei, was detained and therefore unable to fulfil one of the requirements for registering.  He has since been arrested and is in custody on obviously political charges, one of a number of opposition politicians to be behind bars.

There were quite literally no independent election observers this year, and the lack of Internet connection posed additional problems to those within the country trying to report on electoral infringements.  Belarusians were able to vote days in advance, but the opposition were warning people to vote on the day as there was (marginally) less scope for rigging. It is being claimed that 41% voted early, which is almost certainly much higher than the real number.  There were huge queues on 9 August inside the country as well.  With Lukashenko having gripped on to power now for 26 years, and with nobody seriously expecting him to relinquish it easily, it is hard to believe that people would have stood for hours in a queue to vote for his re-election.  Radio Svoboda in fact reported that people had told their correspondent that this was the first time that they were taking part in an election – because they both wanted and hoped for change.

That hope led to tens of thousands of people coming out in rallies all over Belarus and it may be that this time Lukashenko does have cause to worry.  One very cheering moment on Sunday evening came in the Brest oblast city of Kobrin where riot police laid down their shields.  The crowd chanted “Good on you!” [Молодцы!] and hugged them (video here).

Update  The death has been confirmed of the young man crushed after a police prisoner van drove into peaceful protesters.  Separate reports on social media name him as Yevgeny Zayichkin.