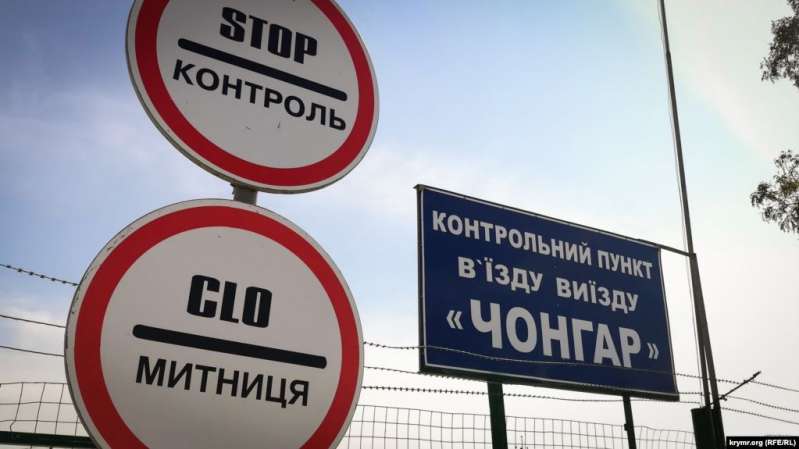 Both the Mejlis of the Crimean Tatar people and human rights groups are appalled by the Ukrainian Cabinet of Ministers’ sudden announcement on 8 August that the administrative border between mainland Ukraine and occupied Crimea was to be closed from 9 to 30 August.  There was no warning, and has still been no explanation for a radical decision that causes enormous problems, while making little sense.  There are also no guidelines for what constitute humanitarian grounds for waiving the ban, and these need to be agreed by government officials whose work schedule means that most of the time it will be simply impossible to contact them.

Refat Chubarov, Head of the Mejlis, reported late in the evening of 8 August that a ‘queue’ of around 300 people had gathered on the Crimean side of the Armyansk-Kalanchak crossing, desperate to get to mainland Ukraine before the ban came into effect.  Since the Russian occupiers were in no hurry, he said, to process people’s documents, it is likely that many were unsuccessful.

The pandemic has resulted in all kinds of dilemmas, with people separated from their families and / or stuck far from their homes.  The situation here, however, is different, as the Cabinet of Ministers issued the decision without consultation and without providing any justification for a ban with serious consequences for many Ukrainians.

A number of human rights organizations which help people in occupied Crimea or displaced by Russia’s invasion and annexation have issued an appeal to President Volodymyr Zelensky and the Prime Minister, Denis Shmyhal about the Cabinet of Ministers Order No. 979.  This states that permission to cross the administrative border will be granted or denied depending on where a person is officially registered.  Thus a person will only be able to cross into occupied Crimea if they are registered there, and into mainland Ukraine if they can show registration.  The appeal is sent also to Zelensky as the official notification on the Cabinet of Ministers’ website asserts that the order was written on the President’s instructions.

The NGOs point out that the Cabinet of Ministers has not provided any convincing arguments to prove the need to reinstate restrictions for people wanting to enter or leave occupied Crimea.   It is claimed only that this is because of an increase in the number of cases of people infected with Covid-19.  That is hardly convincing when the numbers have been increasing throughout Ukraine since the beginning of the pandemic without this being used to justify the closure of borders, even that with the Russian Federation.  In fact, the statistics for Ukraine are worst in the Lviv, Zakarpattya and Ivano-Frankivsk oblasts which very far from occupied Crimea.  The Cabinet of Ministers have not even tried to explain why such a blanket ban is needed, and not a return to conditions of self-isolation with the additional use of the electronic service ‘Act at home’.  The NGOs note that the Cabinet of Ministers’ move was sudden and unexpected, coming exactly a week after all quarantine restrictions such as the two-week self-isolation period, with the use of the ‘Act at Home’ service, at the crossing were lifted. They too note that the lack of any warning led to the formation of huge queues.

No list has been drawn up of humanitarian grounds for allowing somebody to enter or leave occupied territory.  The NGO’s point out that such lack of clarity has often resulted in conflicts at the crossing point and in such permission being based on the subjective assessment of this or that employee of the State Border Guard Service.  People end up unwarrantedly refused permission, or at least forced to wait for a very long time.

The problems are exacerbated by the fact that the decision is formally made by the Head of the State Border Guard Service in agreement with the Ministry on Issues of Reintegration of Temporarily Occupied Territory.  These are officials who are unaccustomed to taking decisions swiftly and who also have much more strict working hours.  All it would take is for a person to need such permission to be provided late on a Friday afternoon, and the chances of catching anybody until Monday would be near nil.

Such procedure makes urgent trips virtually impossible. The authors point out that the lack of clarity in legislation means that people hoping to apply for universities in mainland Ukraine and needing to hand in their documents by 20 August could be prevented from doing so.

The authors of the appeal note that when the Russian occupation regime imposed restrictions from 18 March to 8 August, it was Ukraine that demonstrated a different approach.  Now it is the Ukrainian government’s unwarranted and sudden decision that could lead to a situation where it is not the Russian occupiers who are isolating Ukrainian citizens but their own government, despite all of the latter’s words about reintegration and support for people living on occupied territory.

The Cabinet of Ministers’ move, the NGOs insist, is an unwarranted and disproportionate restriction of Ukrainians’ freedom of movement, and will deprive many of their right to education and medical care, as well as separating families.  They call on the President and Prime Minister to publicly explain the reasons for such restrictions and to ensure that amendments are made without delay to the relevant normative acts on defining humanitarian grounds.