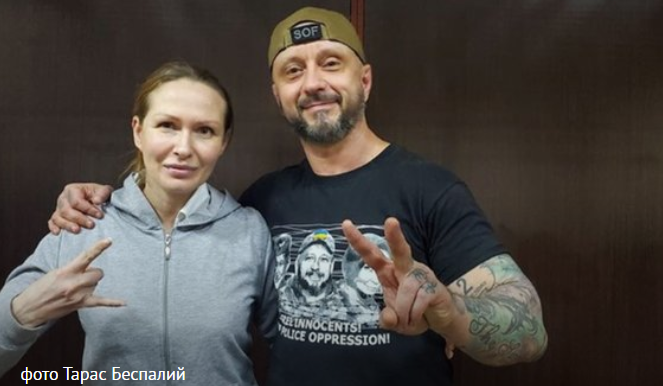 Kyiv’s Court of Appeal has released Yulia Kuzmenko into 24-hour house arrest seven months after the paediatric surgeon and military volunteer was arrested and remanded in custody, accused of involvement in the 2016 murder of journalist Pavel Sheremet.  While the full ruling, including the judge’s reasons, has not yet been published, it does appear that the claims made in December 2019 of vast amounts of evidence were seriously exaggerated.  According to Kuzmenko’s lawyer, Taras Bespaly, the charges are essentially based on two ‘expert assessments’ whose value may well be in dispute.

It remains to be seen whether another court of appeal on 12 August takes the same decision with respect to Andriy Antonenko, a military veteran and musician who has also been imprisoned since December despite mounting suspicion that they, and military nurse Yana Duhar are victims of a serious miscarriage of justice.

The ruling on 11 August allowed the defence’s appeal against the Pechersky District Court ruling on 17 July, which had extended Kuzmenko’s detention for a further two months.   The house arrest, in a village near Kyiv, will also include Kuzmenko having to wear an electronic bracelet, and being prohibited from communicating with a number of people, to be dictated by the prosecutor and investigators.  The ban on communicating seems rather absurd since one of the numerous grounds for doubting the official version in this case was the fact that only two of the three suspects even knew each other, and even then not particularly well.  The other restrictions are clearly nothing in comparison with having been held in detention for seven months despite what would appear to be the flimsiest of grounds.

Bezpaly reported recently that the claim made by top enforcement officials on 12 December 2019 that only 5% of the proof actually collected had been revealed to the public had proven to be false.  On 22 May 2020, the investigators had completed their work and made all material available to the defence.  While it is for the court to assess this evidence, Bezpaly asserts that the sole main evidence has proven to be the gait assessment made by Dr Ivan Birch from the UK, and a ‘portrait – psychological assessment’ carried out by two experts from the Kyiv Scientific Research Institute of Forensic Expertise (Yuri Irkhin and Andriy Semenets).  With respect to the latter, Bezpaly writes that the defence approached several forensic institutes to commission an independent expert assessment, but were told (and Bezpaly has posted the responses) that this is impossible.  You cannot build a psychological portrait by a video and still less can you compare two videos since this runs counter to the very subject of the assessment and there is no methodology for it.  Forensic gait analysis is only practised, Bezpaly says, in three countries and certainly a ‘Primer for Courts’ produced by the Royal Society of Edinburgh is full of words of warning.  With respect to apparent similarities between two videos, for example, the primer states: “in the comparison, pairs of images, or short video sequences, from different longer video recordings that seem very similar are presented. If these had both been identified as characteristic of the person in separate and independent reports on the two recordings, then the evidence of similarity would be compelling. If on the other hand the analyst had sifted through both recordings together to find the pair of frames that show the closest match, then the evidence may be flawed.”

In the present case, it would seem that Dr Birch was shown two videos and his analysis is being used to assert that the undisputed person in one video (i.e. Kuzmenko) is the person in the other.  This has always seemed very far from the guarantees provided, for example, by police identification parades and it does not appear to correspond to the tasks of gait analysis.

Although the application currently before the European Court of Human Rights was lodged by Antonenko’s lawyers, all the key claims in it apply just as well to Kuzmenko.  Her right to be presumed innocent prior to a court ruling otherwise was flagrantly violated, and it is extremely likely that she was held in detention for so long because of the high-level press conference that all but declared her, Antonenko and Duhar guilty.

44-year-old journalist and former Belarusian prisoner of conscience, Pavel Sheremet was killed in a bomb blast in the centre of Kyiv on 20 July 2016, with both the then President and Head of Police stating that it was “a matter of honour” for Ukraine to find and punish his killers.

There were disturbing allegations of a link with Ukraine’s Security Service [SBU] in 2017, with some of the questions then raised remaining unanswered to this day.

It was only after President Volodymyr Zelensky was elected, promising progress on such high-profile cases, that noises began being made publicly about movement in the investigation.   On 23 July 2019, Zelensky held a press briefing at his official offices, with the participation of the Head of the Police, Serhiy Knyazev and Interior Minister Arsen Avakov.  Both Zelensky and Avakov publicly signed non-disclosure agreements and were then taken into another room.  Zelensky later came out thanking “specialists and criminal investigation officers”, saying that he had seen a great deal of material and that he hoped that there would be a result.  His words were extremely garbled, however the entire event did suggest that he had been shown evidence that pointed to the killers.

On 12 December 2019, there was an even more public press briefing, broadcast live by many media, at which not only Zelensky and Avakov were present, but also the then Prosecutor General Ruslan Riaboshapka, the new Head of Police Ihor Klymenko and his deputy, Yevhen Koval.

Avakov announced that suspects had been arrested.  In fact, Kuzmenko later told the court that the most upsetting thing for her was that she had been in the operating theatre during the press briefing that “made her into a killer” and ended her career as a paediatric surgeon.

Despite formal adherence to the use of words like ‘suspect’, all of those who spoke at the press briefing clearly presented the case as solved and something for which the enforcement bodies deserved congratulations.

Photos of Antonenko; Kuzmenko and Duhar were shown throughout the briefing, together with the photos of two other people, also military volunteers: Iryna and Vladyslav Hryshchenko.  The latter were already under arrest on different charges, however during his presentation, Koval described the five as “a group” and there was a clear suggestion that all would face charges over Sheremet’s murder.  No charges have been laid against the Hryshchenkos, with this of particular concern since it was clearly understood from the briefing that it was the similarity between the explosive devices used to kill Sheremet and a crime that Vladyslav Hryshchenko is accused of that led to Antonenko first being linked with the Sheremet case.

At one point, Koval stated that all five of the people named were “known to us over past crimes”.  There is nothing to suggest that this was true of Antonenko, Kuzmenko and Duhar, and claims that Antonenko was involved in bringing down an electricity pylon in the Kherson oblast in November 2015 (linked with attempts to stop electricity supplies going to Russian-occupied Crimea) have been totally refuted.

It should be stressed that this was a very public occasion, with many media broadcasting it live, including all the unfounded allegations that never appeared in the actual indictment.

During the press briefing, Avakov, the Head of Police and his Deputy all claimed that there was a huge amount of evidence, of which they had purportedly only revealed a small part.  There is nothing to suggest that this was the case, and in fact, the charges were suddenly radically changed five months later.  This was after Riaboshapka, who had publicly suggested at the briefing that the killers had been identified, admitted that more evidence needed to be gathered before the case was passed to the court.

Then in comments about the case during his 20 May 2020 press conference, Zelensky essentially stated that it was Interior Minister Avakov “who started this” and that if the case did not hold up in court,  Avakov would be held responsible, with this likely leading to “staffing changes”.

It was immediately after Zelensky’s comments on 20 May that major changes were made to the charges against Antonenko; Kuzmenko and Duhar.  While additional charges were added (deliberate destruction of property (Article 194 § 2 of Ukraine’s Criminal Code) and of possession of explosive devices (Article 263 § 1), critical parts of the charges were dropped. Antonenko was no longer accused of having organized the killing, but only of carrying it out, by prior conspiracy.  Kuzmenko was now only accused of having planted the explosive device, but not, as previously, with detonating it.   The three suspects were no longer considered ‘a group’ (and the Hryshchenkos do not appear to be there at all).

The motive of ‘destabilization’ remains, however  the absurd and insulting claims against Antonenko was removed.  If the prosecution hopes that this will be forgotten, they should think again.  The documents initially presented to the court to justify Antonenko being placed in detention claimed that he, “seized by ultra-nationalist ideas, cultivating the supremacy of the Arian race, the division of society on the basis of ethnic identity, wanting to make his views the object of public attention and carrying out his actions in order to draw the public’s attention to certain political beliefs… decided to create an organized group in order to carry out the murder of journalist and radio presenter Sheremet”.

This was not simply untrue, but copy-pasted from a 2015 indictment against another person altogether.

The final version, which is supposedly really to go to court, leaves numerous questions unanswered.

It is not known who organized and commissioned the crime, and who detonated the bomb.

There are only hints of a possible link with enforcement agencies, with this of major concern given the above-mentioned allegations about SBU surveillance.

There is a very unconvincing motive which claims that Sheremet was targeted merely as a prominent person, not because of his journalist work in Ukraine, his opposition activities in Russia and Belarus, etc.

Reasons have been given above for questioning the value of the expert assessments in this case.  Even without other doubts, it seems difficult to understand why such analyses should be given greater importance than the easily measured and huge discrepancy in height between the man and woman seen on the CCTV footage near Sheremet’s car, and that of Antonenko and Kuzmenko.  You also do not need to be a forensic expert to see that the beard and sideburns that Antonenko had at the time seems different from those of the assumed male perpetrator.  All of this was pointed out repeatedly in court hearings, yet, at least until 11 August, ignored.