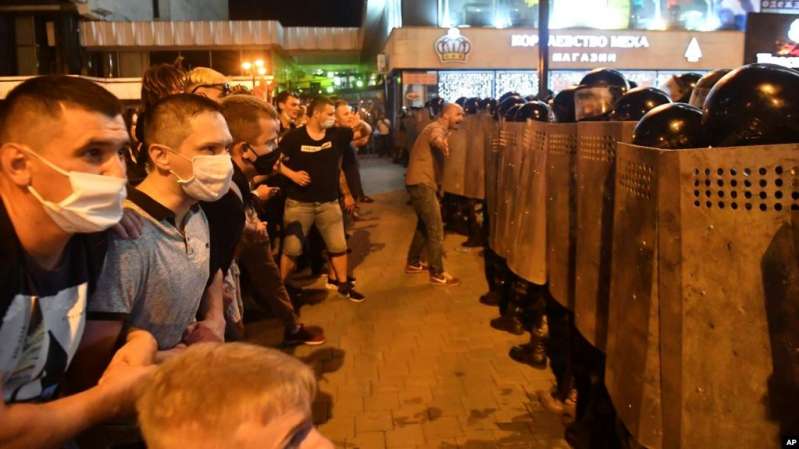 Police block demonstrators during a rally after the Belarusian presidential election in Minsk on August 9.

"I know that this morning, Belarusians have awakened in a new country," opposition presidential candidate Svyatlana Tsikhanouskaya said in a postelection statement on August 10. "And I hope that [this day] will bring only good news."

Superficially, this "new country" in many ways resembles the old one -- a controversial presidential election that bore all the hallmarks of having been manipulated and falsified produced an official result of around 80 percent support for incumbent strongman Alyaksandr Lukashenka.

Angry protests were put down with brutal force, as the opposition candidate urged security forces to show restraint while refusing to accept an official tally she said did not reflect the choice voters made.

But in other ways, Belarus does indeed appear to be a new country, one in which opposition to the 65-year-old Lukashenka, who has ruled the country since 1994, is broader and more confident than ever before.

"Belarusians are in general pretty rational and cautious people, and they aren’t inclined to sudden, dangerous movements," said Belarusian journalist Dzmitry Navosha, who is a co-founder of the Sports.ru website "But regarding their ability and willingness to influence the way life is organized in the country and to influence the government, fortunately, some fundamental changes have begun."

"It is interesting to discuss why this has taken so long and what was necessary to make it happen," Navosha added in an interview with RFE/RL’s Russian Service. "My version is that the people who want change had to come to the realization that they are the majority.... People only gain the confidence and power to demand their rights at the moment when they form a clear majority."

The election was held against the background of a contracting economy and Lukashenka’s handling of the coronavirus pandemic, which he repeatedly dismissed as "mass hysteria."

Following the presidential election in 2010, Belarusian security forces cracked down brutally on an opposition demonstration in Minsk, rounding up hundreds of demonstrators and seven of the candidates whom the fractured opposition ran against Lukashenka.

Ten years later, on the night after polls closed in the August 9 election in which Lukashenka was seeking a sixth term, Belarusian security forces detained about 3,000 people, only about one-third of them in Minsk. The other detentions took place in about 33 other locations across the country, according to the Interior Ministry.

Belarusian political analyst Artsyom Shraybman told RFE/RL’s Belarus Service that there were two key differences between the current events and those of a decade ago.

"The resources of the security forces are diluted," he said. "They have had to disperse people from polling stations, and they cannot concentrate all their forces in Minsk because they need to leave assets in the regions and protect administrative buildings. As a result, the crackdown has not been focused on one location."

In addition, Shraybman said, the protesters this time around had a clearer conviction that Lukashenka did not win the election and this is a "powerful motivation."

"Now, apparently, a large number of people believe that they can change the government by taking to the streets," he concluded.

A key to this transformation has been an important shift by the opposition -- one that seems to have occurred at least in part by force of circumstances imposed by the government.

In past elections, broadly speaking, the "pro-Russian" Lukashenka has been opposed by a "pro-European" opposition that oriented itself toward Belarusian-speaking "patriots" and wrapped itself in the symbols of independent Belarus, analysts say.

The opposition campaign was conducted almost exclusively in Russian, the most inclusive language in the country, as it is used at home by about 70 percent of the population.

"From the beginning these [opposition] candidates did not orient themselves toward the Belarusian nationalist community but oriented themselves primarily toward those who were economically and socially disenchanted with Lukashenka -- the silent majority," Warsaw-based political analyst Pavel Usov said.

Usov added that Belarus was seeing the awakening of an electorate that for a long time, either passively or actively, supported Lukashenka. It is an electorate "for whom matters of nationality and sovereignty and national symbols are not as important or immediate as questions of well-being, stability, and economic growth -- which was also the case in 1994," when voters first elected Lukashenka as a candidate of change.

This "silent majority" of Belarusians might be best symbolized by 73-year-old writer Svetlana Alexievich, who won the Nobel Prize in literature in 2015. She writes exclusively in Russian, yet draws her literary and cultural antecedents from both the Belarusian and the Russian traditions and is an outspoken advocate of Belarus’s sovereignty.

"Lukashenka thought he could deceive this silent society, that he could tell tales, scare them with fear," she told RFE/RL in an interview in late July. "Nothing like that happened. A new generation has grown up [and] middle-aged people have regained consciousness. These are not the same people who existed 26 years ago when Lukashenka began to rule."

Belarusian economist and political commentator Syarhey Chaly said he was surprised by the turnout on August 9. "Many of those who came to vote this time were being politically active for the first time," he told Current Time, a Russian-language television network run by RFE/RL in cooperation with VOA. "They never voted before and never participated in any demonstrations. These were people who previously had been apolitical."

In the run-up to the August 9 vote, Lukashenka’s government barred all the significant would be opposition candidates -- Babaryka, Tsapkala, and Tsikhanouskaya’s popular vlogger husband, Syarhey -- from running. For the opposition, this had the salutary effect of uniting it around the candidate who was allowed to run, Tsikhanouskaya.

Moreover, the government’s move -- which may have resulted from what critics charge is deep-seated sexism that prevented it from taking Tsikhanouskaya seriously -- fundamentally transformed the campaign. Tsikhanouskaya openly disavowed any pretensions to the presidency and ran essentially on one basic promise -- to hold a free and fair presidential election as soon as possible after taking office.

"Right now we are seeing the rising up of a civic nation in which people are rejecting the idea that has long been pounded into them that ’nothing depends on us and we are no one and everything is decided from above and we are just little people,’" journalist Navosha said. "Now they are expressing their rights and demands and their desire to influence what happens in their country."

’We Are The Government’

Navosha argued that the coronavirus pandemic may have played an important role in solidifying this civic nation.

"I think the origin of this civil society was when thousands of people collected millions of dollars and created a complex logistical system to provide necessary supplies to distant rural hospitals, which the government was not doing," he said. "Essentially, they created a parallel Health Ministry, and, by the way, a significant number of those people are now working in the campaigns of the opposition candidates."

"So they ask themselves what they need such a government for," he added. "They are saying, ’We are the government and we are going to do what we want.’"

Minsk-based economist Chaly agreed, saying that the emerging situation will be perilous for Lukashenka to handle. "To be honest, I do not know what the authorities can do now," he said. "What can be done with a nation that has for the first time realized that it was victorious, and the election was simply stolen?"

The main thing that has changed since Lukashenka was able to suppress the postelection protests in 2010, Chaly added, is that "now the majority knows that they are the majority."

"They know that the election was stolen," he added. "And a return to ordinary life -- I can’t imagine how that will be possible."