Belarus: ‘I appeal to all Europe: Please help us, because they’re killing my family’Belarus: Peaceful protester killed in violent crackdown after claimed Lukashenko victoryLukashenko regime’s savagery may be backfiring in BelarusBelarusian museum director who refused to sign false election protocol found deadLukashenka returns Donbas mercenaries to Russia, others, reportedly, on their way to BelarusBelarus KGB arrest journalist who identified the Ukrainian Berkut helping Lukashenka regime Belarusian Journalists Handed "Absurd" Prison Sentences For Live Coverage Of Anti-Government RallyMore Than 1,000 Detained In Belarus As Protesters Face Tear Gas, Stun Grenades, BeatingsBelarus: Savage attack and possible 3-year sentences against journalists reporting March against TerrorBelarusian Police Detain More Than 90 As Protests Enter 11th WeekBelarus threatens to use lethal force against protesters as pensioners march for freedomHow post-election protests are creating a new Belarus’We’re Belarusians, Not A Russian Region’: Protests Take Aim At KremlinBelarusian Opposition Presents Broadest Challenge Yet To Strongman Lukashenka After Disputed ElectionWhy were Wagner fighters from Russia seized in Belarus and can Ukraine get them extradited?State Media Vs. The Streets: How Lukashenka Lost The Media War In BelarusTop Lukashenka Challenger Babaryka Barred From Belarus’s Presidential ElectionBelarusian Vlogger Gets Another 15 Days In Jail As He Awaits Criminal ChargesAI condemns purge on bloggers & activists ahead of presidential elections in BelarusUkraine’s Security Service abducts and deports former political prisoner to Belarus
• Topics / The right to liberty and security
• Topics / News from the CIS countries 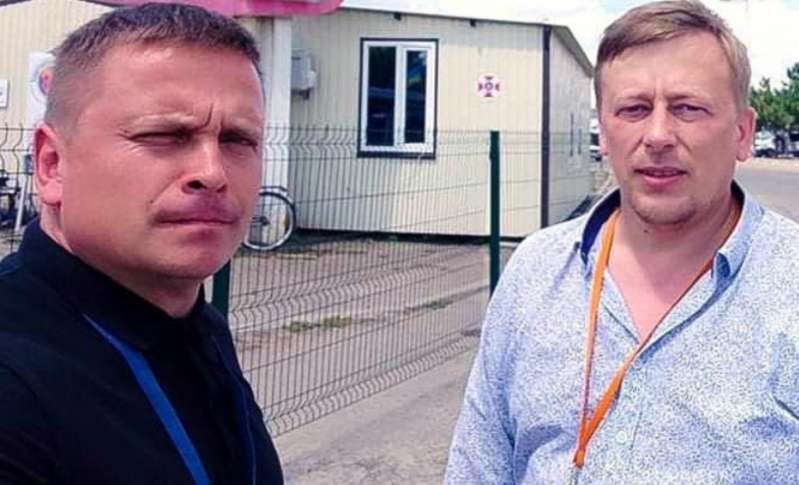 A Belarusian human rights activist has informed Radio Svoboda that the two Ukrainian rights activists brutally detained on 12 August are to face criminal charges over supposed ‘mass riots’.  Tatyana Ravyaka’s apartment in Minsk, where Konstantin Reutski and Yevhen Vasyliev were staying, was subjected to a search on Wednesday evening, during which the enforcement officers removed Reutski’s computer, Vasyliev’s Ukrainian passport and other items.  Ravyaka reports that the document she was shown was signed by the prosecutor of the Sovietsky District in Minsk.

This is an extremely worrying development, and part of the Belarusian regime’s attempt to call the peaceful protests that it has been savagely suppressing since the presidential elections on 9 August ‘mass riots’.  Such charges can carry a sentence of up to 8 years’ imprisonment.  It is unfortunately likely that the regime of Aleksandr Lukashenko, in trying to deny that the election results were falsified, will find it convenient to blame ‘foreign elements’ for what were, in fact, mass peaceful protests by Belarusians demanding their democratic choice.

Ravyaka says that the two Ukrainians, who are friends from human rights courses, only arrived in the country on 12 August. They came, she says, as part of a humanitarian mission to help Belarusian colleagues cope with the work arising from the vast number of detentions since 9 August.

As reported earlier, Konstantin Reutski and Yevhen Vasyliev were brutally detained in Minsk at around 17.00 on Wednesday by Belarusian traffic police.  Reutski, who is also a journalist, had been videoing the violent seizure of a young pedestrian which may well have been the reason that the two were also taken prisoner.  Although Ravyaka believes they are being held in a SIZO or detention unit, their exact whereabouts is unknown and there has been no contact with them since they were set upon.  Hromadske TV has posted a video of the officers who forced Vasyliev to the ground very brutally and then dragged him away.  As well as the absurd charges, there is also concern about the treatment they are likely to have received given the savagery demonstrated since 9 August against peaceful protesters, innocent passers-by and also journalists.

Reutski and Vasyliev are both members of the civic movement Vostok SOS which arose to help people displaced by Russia’s aggression in Eastern Ukraine, and which also monitors rights violations in occupied Donbas.   An appeal by a huge number of Ukrainian civic and human rights NGOs has demanded the men’s release from the Belarusian authorities, while also calling on Ukraine’s Foreign Ministry to intervene.

Oleksandra Dvoretska, Reutski’s wife and the coordinator of Vostok SOS reports that Belarusian human rights NGOs warn that it can take up to 48 hours to ascertain where people are being held.   Since the evening of 9 August, the Belarusian enforcement bodies have detained at least six thousand people, and it is obviously a slow process to ascertain who is where.

Dvoretska rejects the one comment so far made by an official from the Belarusian foreign ministry on Ukraine’s TV 5.  He apparently claimed that the two Ukrainians had been working without accreditation.  She points out that this is nonsense: “an active civic position and civic journalism cannot have accreditation”.  Both were in Belarus legally, and there had been no questions when crossing the border.

Riot police (and soldiers) in Belarus have been rounding up, beating and also shooting at peaceful protesters, with even very young teenagers targeted.  Dvoretska insists that the two Ukrainians were “where they had to be, supporting their friends and relatives in Belarus in their struggle for honest and transparent elections, for their future”.

Reutski organized Euromaidan protests in Luhansk, and both men have covered events during Russia’s invasion of Crimea and on the war front in the east of Ukraine.

Before this latest effective abduction, at least nine Ukrainians were reported to have been detained, although all were later released.  In the brutal suppression of peaceful protest against falsification of the presidential elections on 9 August, OMON riot police and Interior Ministry forces have also targeted many journalists, including at least one other Ukrainian, Mistislav Chernov, who is working for Associated Press.

In their appeal, Ukrainian NGOs also call on the international community to help get independent human rights monitoring missions in Belarus and to increase international pressure on Belarus in order to bring to account all of those who illegally use force against citizens who have come out in peaceful protest and those who falsified the results of the elections.