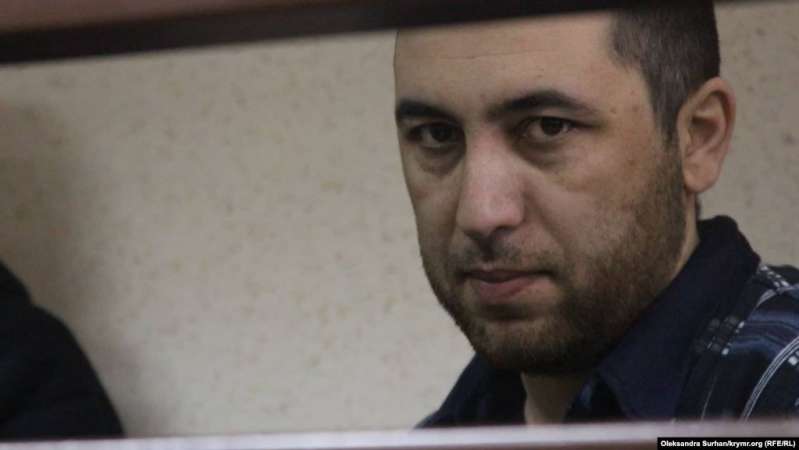 It has become so standard that Russian or Russian-controlled courts automatically extend detention without trial of Ukrainian political prisoners, that the hearings are scarcely worth reporting.  Except when something goes wrong, which is what happened in the case of imprisoned Crimean Tatar civic journalist Osman Arifmemetov.

On 23 July, Lawyer Alexei Ladin reported that his appeal against Arifmemetov’s extended detention had – unexpectedly – been allowed.  His surprise, it should be stressed, was not because the appeal was not entirely justified.  There were no grounds for the arrest on 27 March 2019 of Arifmemetov and 22 other Crimean Tatar civic journalists and activists, and so there was clearly no justification for his detention to be extended still further well over a year later.  No, the decision to revoke the ruling from a Russian-controlled Crimean court was probably taken by judge Olga Silina, from the Third Court of Appeal in Sochi, because of the overt lawlessness with which, back in June 2020, the Russian-controlled Crimean High Court had obviously been working in tandem with the FSB [Russian security service]. ‘Judge’ Viktor Vasilyev had not just ignored Arifmemetov’s application for recusal of the judge, but had also effectively not given him a chance to see the case material.

However automatic such rulings may be, Silina clearly decided that such omissions were just too much and revoked the Crimean ‘court’s’ detention order.  That, unfortunately, was where her concern for adherence to the law fizzled out. Presumably understanding all too well the consequences to herself if she released a political prisoner, and a Ukrainian one at that, Silina decided herself to remand him in custody until 23 August.  There had been no application from the prosecution, and therefore Arifmemetov should have been released.  Perhaps would have been, had he not been a political prisoner.

On 10 August, it was all back to ‘normal’, with the de facto Crimean High Court, this time under Alexei Kozyrev, extending Arifmemetov’s extension until 15 September, when the journalist will have been imprisoned for almost 18 months.  Kozyrev predictably ignored the fact that Arifmemetov has two small children and is not accused of any actual crime.  Nor did it bother him that no ‘investigative activities’ are being carried out – Arifmemetov is simply imprisoned without a trial.

Arifmemetov is turning 35 on 28 August 2020.  He is a maths and information science teacher and programmer by profession, who reacted to the mounting number of political prisoners after Russia’s annexation in 2014 by becoming one of the main civic journalists reporting for the Crimean Solidarity civic initiative on searches, arrests and court hearings.

Not one of the men is charged with a recognizable crime or even a plan to commit a crime.  Instead they are accused of ‘involvement’ in the peaceful Hizb ut-Tahrir party which is legal in Ukraine and which only one country in the world -  Russia -  has labelled ‘terrorist’, and without providing any real explanation.  Civic journalists Remzi Bekirov and Ruslan Suleymanov, as well as three civic activists Farkhod Bakharov; Riza Izetov and Shaban Umerov are charged with ‘organizing a Hizb ut-Tahrir cell’ [Article 205.5 § 1 of Russia’s criminal code], carrying a sentence of up to life imprisonment.  Arifmemetov and the other men are accused of ‘involvement’ in such a group [ Article 205.5 § 2] and face sentences of up to 20 years.

In March 2020, all 25 men were also charged, under Article 278, with “planning a violent seizure of power and change in Russia’s constitutional order”.  The Memorial Human Rights Centre, which has recognized all of the men as political prisoners, has on many occasions noted that this extra charge is often used against political prisoners who refuse ‘to cooperate’ with the prosecution.

The first months of Osman’s imprisonment brought many bitter echoes of the harrowing accounts he had heard from grandparents and others who lived through the 1944 Deportation of the entire Crimean Tatar people from their homeland. He  has described his experiences in a poignant and award-winning text from prison entitled ‘My Deportation’.