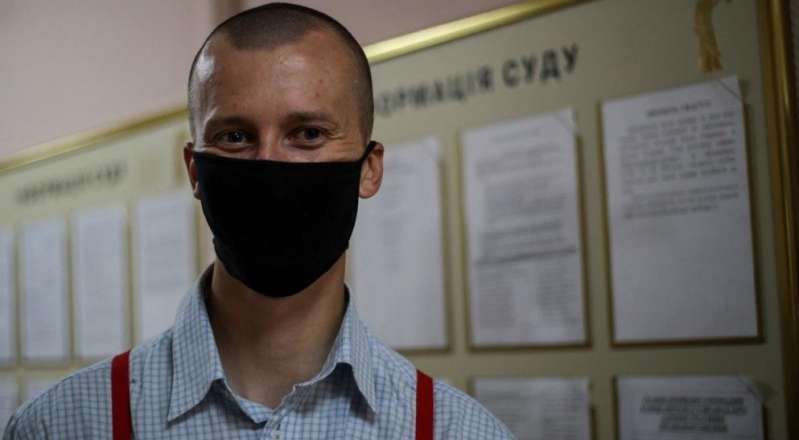 After five years as a political prisoner in Russia, Oleksandr Kolchenko has been sentenced by a Ukrainian court to 40 hours of community work on the basis of false police protocols which the judge chose to believe. It is to be hoped that the court of appeal will overturn a sentence which seems evidently excessive, but more is needed to end the impunity for falsified protocols which were used for mass persecution of peaceful Euromaidan protesters back in 2013/14.

On 10 August Kolchenko was with a group of anarchists taking part in the demonstration of solidarity with the opposition in Belarus outside the Belarusian Embassy. According to a Graty correspondent, one of the anarchists got out some eggs and was detained by the police who believed he was planning to hurl them at the embassy.  Kolchenko himself says that he saw one guy being roughly detained without any obvious reason and went over to find out what was going on.  As he ran up, another person was being detained, equally roughly, with the police not answering his and others’ questions as to the reason.  Kolchenko asserts that at this point a police car drove up to them, at which point several of them locked arms to demonstrate that you could not attack participants of a peaceful protest.  The police began detaining them, with this fortunately recorded on a video shot by Graty correspondent, Stas Yurchenko. It is worth watching the video, since the police claimed that Kolchenko used foul language, spat and grabbed at police uniforms.  None of this can be seen, and the last seems physically impossible as the young men were holding on to each other.

Nonetheless, on 11 August judge Tetyana Levytska, from the Shevchenkivsk District Court, found Kolchenko guilty of petty hooliganism (Article 173 of the Code of Administrative Offences) and ordered him to do 40 hours community work.  A separate charge of flagrantly disobeying the police was due to be heard by a different judge, Iryna Makarenko.  Since the police had failed to explain in the protocol how exactly Kolchenko’s actions constituted such flagrant disobedience, Makarenko sent the protocol back to the police who are threatening to correct it and return it to the court.

The hearing over ‘petty hooliganism’ was heard in Levytska’s office, without witnesses or journalists being admitted.  Graty reports a comment from Kolchenko about the “surrealism” of such a situation.

“They told me yesterday in the police station that I was not detained, but they didn’t let me out and did not return my papers. And now a judge has said that the court hearing is open, but did not allow any journalists or witnesses”.

The refusal to allow witnesses to speak is particularly disturbing given the serious grounds for disputing the story presented by the police.  Kolchenko was represented by Yevhenia Zakrevska, a lawyer well-known for her work in cases involving crimes against Maidan activists.  She calls it a disgrace that the court decided on the basis of two police officers’ reports, which were then drawn up into a protocol by a third police officer, that the claims that they made were true, without any further verification (and without allowing witnesses to speak).

Two hand-written reports were presented by Roman Kovtun, an officer of a special forces unit (i.e. the old, notorious Berkut, just renamed) and police sergeant Yevhen Pohrebny.  Both effectively copied the same claims, albeit with varying (and disturbing) levels of illiteracy.  These were then written out in a formal protocol by police captain Vladislav Feshchenko, who copied the other men in asserting that Kolchenko had used foul language in a public place but then added, on his own initiative and with no attempt to substantiate his claim, that Kolchenko had “hurtled to have a fight”.

As mentioned, this is not backed by the video footage, and would presumably not have been by witnesses had Levytska not refused to hear them out.  These seem compelling grounds for the judge at appeal level to reconsider the ruling.

Even if the court of appeal does take a different view, it is most unlikely that police officers, who would thus be found to have lied, will face any consequences.  Zakrevska points out that during the Euromaidan protests, several hundred drivers were unwarrantedly prosecuted on the basis of false claims claim by traffic police in their reports.  Even where the investigators established that the claims were false, not one of the police officers was held to account despite the lies told often having serious consequences (with people at least losing their licences for up to six months).

Not one of the Berkut officers who lied in their reports about detaining people on 30 November and 1 December 2013, and then throughout January 2014, was dismissed for making false claims in their reports.  Zakrevska notes that the criminal proceedings against them are continuing to this day.

Zakrevska and other Maidan lawyers have been trying to get charges brought for the last six years with absolutely no effect, and with prosecution now in most cases time-barred.

This is surely the third surreal aspect to Kolchenko’s prosecution in Ukraine.  A judge can pass a ruling based solely on fabricated claims in police reports, then rewritten into a protocol by another officer, making no attempt to establish whether the police version of events is true.  It is too early to say whether in Kolchenko’s case, the wrong can be righted without the sentence having come into force, however the impunity enjoyed by enforcement officers and courts for involvement in persecution during Euromaidan continues to this day, and that is a danger for any Ukrainian.