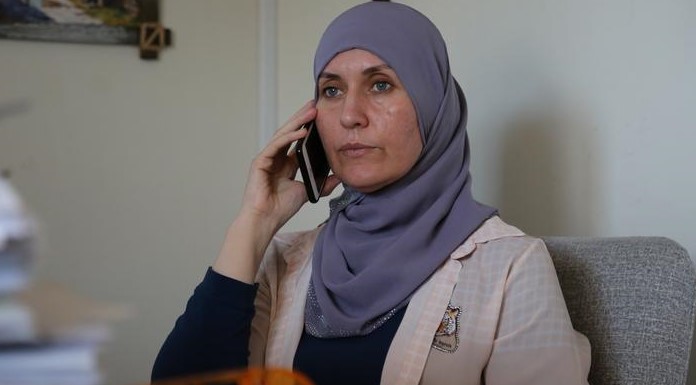 A week after a Russian court in Rostov denied Crimean Tatar political prisoner Server Mustafayev his right to defend himself in court, the same judges have filed a formal complaint against one of the defence lawyers on equally unwarranted grounds.  The eight Ukrainians in this ‘trial’ are civic journalists and activists, and their determination, and that of their lawyers, to demonstrate their innocence is clearly riling the three judges whose behaviour is becoming more and more inadequate.

Neither in the records of the hearing on 17 August, nor in those on 11 and 12 August, is there anything to indicate that lawyer Lilya Hemedzhi did anything except uphold the interests of her client, Server Mustafayev.  Yet on 11 August, the court bailiffs tried to get an administrative protocol drawn up against her and the state-appointed lawyer merely for having tried to consult with Mustafayev after presiding judge Rizvan Zubairov removed him from the court for the duration of the trial. On that occasion, one of the bailiffs demurred and the attempt was dropped.

This time it was Zubairov who first ignored Hemedzhi when she asked, three times, for the possibility to react to the prosecutor’s dismissal of important testimony.  After the third request was ignored, Hemedzhi said “I take your silence as a sign of consent, your honour”

Zubairov then responded by shouting at Hemedzhi to sit down and withdrawing to the judges’ consulting chamber to draw up a separate ruling in the form of a complaint to the Chechnya Bar Chamber where Hemedzhi is registered, for the latter to decide on disciplinary measures.  Hemedzhi told ‘Crimean Solidarity’ that she is convinced that the court was deliberately heading towards issuing such a separate ruling.  Zubairov spoke very unclearly and it was hard to hear most of the ‘infringements’ that he was accusing Hemedzhi of, however, judging by Zubairov’s reaction to a legitimate attempt to react on 17 August, it seems very unlikely that the other ‘infringements’ claimed warrant the formal complaint.  Hemedzhi is under no doubt that this is a warning that, if she tries to speak without permission (when the judge ignores her legitimate requests for permission to respond), he will have her removed.  She plans to appeal against the separate ruling which she calls pressure on all lawyers who take an active stand.

This is not the first time that courts have put pressure on Crimean Tatar lawyers.  Renowned human rights lawyer, Emil Kurbedinov has been detained and jailed for several days twice on grotesquely absurd charges. It was after seeing how inundated lawyers like Kurbedinov were becoming because of the mounting repression under Russian occupation that , Lilya Hemedzhi decided to obtain a licence to work as a defence lawyer.  She was obstructed on all kinds of pretexts in occupied Crimea, including the claim that she could not get her licence because of her hijab.  She managed to arrange with the chamber of lawyers in Chechnya and took all the exams and registered there. Like Kurbedinov, Hemedzhi has earned international respect for her work in occupied Crimea and she was honoured by the Dutch Government with its Human Rights Tulip award for 2019.

Pressure on defence lawyers is not the only way in which  judges from the Southern District Court in Rostov are taking part in something that has only the most superficial resemblance to a court of law.

Since the terrorism charges against the eight Crimean Tatar civic journalists and activists are based solely on unproven allegations of ‘involvement’ in the peaceful Hizb ut-Tahrir movement which is legal in Ukraine, any evidence refuting the charges of terrorism or allegations of involvement in Hizb ut-Tahrir should in theory be of maximum interest to the court.  Instead, both the prosecutor and the judges go out of their way to prevent such evidence being added to the case.

On 17 August, for example, the defence insisted on reading out testimony obtained from  Ayder Rustemov, Mufti of the Spiritual Directorate of Muslims of the Autonomous Republic of Crimea (i.e. not the Mufti collaborating with Russia) and applied for him to be questioned as a person with expert knowledge by video link from Kyiv.

The protocol indicates that Rustemov knows Server Mustafayev and Seyran Saliyev and was on the Haj with the latter. In his written testimony, the Mufti states that he knows about Hizb ut-Tahrir and that the latter has never committed any terrorist acts.  Nor will they ever take up arms, he says, adding that the organization uses only non-violent methods. He gave other comments as well, including on whether Khalifat is linked with the overthrowing of secular governments.  The Mufti very clearly has expert knowledge of Islam, unlike the linguistic ‘experts’ whom the Russian FSB has employed to provide the ‘proof’ of involvement in Hizb ut-Tahrir which the prosecution want. The linguists’ ‘expert assessments’ have already been slated by a qualified linguistic expert, with the Mufti clearly even more directly qualified to comment on issues of Muslim theology.

Prosecutor Yevgeny Kolpakov objected to the Mufti being called in to give testimony and claimed that the defence’s application was ‘provocation’.  It was after Kolpakov claimed this and that the information from the Mufti provided in the protocol was not ‘proof’ that Lilya Hemedzhi asked for permission to respond and was ignored.

Lawyer Alexei Ladin applied to have a description of Hizb ut-Tahrir provided by the Ukrainian Helsinki Human Rights Union added to the case.  This was supported by one of the defendants, Memet Belyalov who pointed out that this was important given the claim by FSB officer Nikolai Artykbayev that Hizb ut-Tahrir is a terrorist organization using violent methods.

Zubairov refused, claiming that the document from the Ukrainian Helsinki Human Rights Union did not mention the defendants.  This is absurd given that not one of the men on trial is himself accused of any act of terrorism, violence or any plan to commit such acts. The only possible reason for allowing Artykbayev’s claims about terrorism, and rejecting a human rights group’s analysis that denies any link with terrorism is that the court is only interested in the men’s conviction.  This was, in fact, seen during the previous hearings when Zubairov made it clear that if defence witnesses are not providing testimony linking the defendants with Hizb ut-Tahrir, the court does not want to hear them.

Six men were arrested on 11 October 2017 after armed searches that found nothing but some religious literature.  Initially only Marlen (Suleyman) Asanov was designated the role of ‘organizer’ of a Hizb ut-Tahrir ‘cell’ (under Article 205.5 § 1 of Russia’s criminal code), with this carrying a sentence of up to life imprisonment. The other five men:  Ernest Ametov;  Memet Belyalov; Timur Ibragimov; Seiran Saliyev and Server Zekiryaev were charged with ‘involvement’ in this  (under Article 205.5 § 2 – from 10 to 20 years’ imprisonment). In February 2019, for no obvious reason, the FSB decided to lay the harsher charges against Belyalov and Ibragimov as well.  Further confirmation that this was an attack on Crimean Solidarity came on 21 May 2018 with the arrest of Crimean Solidarity Coordinator Server Mustafayev and Edem Smailov, both of whom are charged with ‘involvement’ in a Hizb ut-Tahrir group.

The men are also charged (under Article 278) with ‘planning to violently seize power’.  No attempt has been made to explain how eight men were supposed to have planned to do this without a single weapon.   Russian prosecutors simply claim that this follows from Hizb ut-Tahrir ideology. It does not, and, in fact, the Memorial Human Rights Centre, which considers all the men to be political prisoners, has observed that the extra charge is often laid where political prisoners refuse to ‘cooperate with the investigators’, as in this case, and all prosecutions of Crimean Muslims.