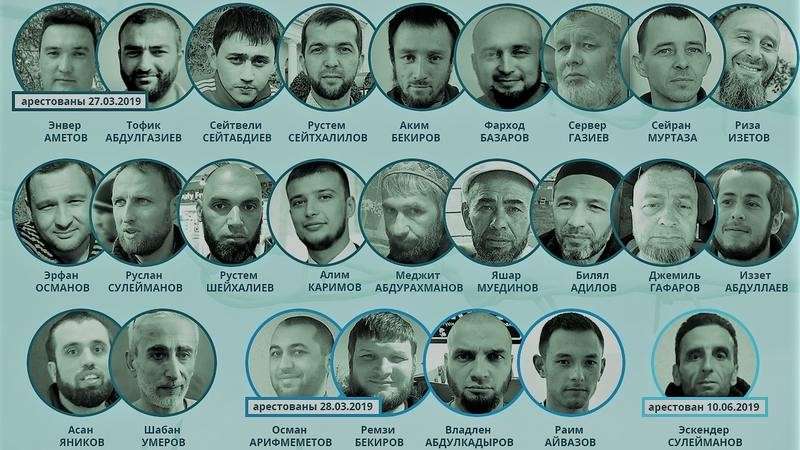 Russia’s FSB have split up a group of 25 Crimean Tatar political prisoners into five absolutely identical ‘trials’.  It may be logistically difficult to hold one trial with 25 defendants and their lawyers, but the primary aim of the five clones is almost certainly to deflect attention from Russia’s most brazen to date attack on Crimean Tatar civic journalists and activists informing the world about violations in occupied Crimea and helping the victims of persecution.

The FSB armed searches and arrests on 27 March 2019 provoked international condemnation in particular because of the obvious targeting of civic journalists and activists.  There was strong protest from, among others, the US State Department, Human Rights Watch, Freedom House and Civil Rights Defenders.  The Memorial Human Rights Centre almost immediately declared the 23 men arrested on that day, and Rayim Aivazov, seized and tortured a little later, political prisoners and stated unequivocally that the FSB was using mass arrests to try to crush the Crimean Tatar human rights movement.   The arrests were both a continuation and sharp escalation in the offensive against Crimean Solidarity, the civic initiative that arose to help political prisoners and their families and to ensure that information was circulated and streamed onto the Internet about repression in occupied Crimea. Four of the men– Osman Arifmemetov ; Remzi Bekirov; Rustem Sheikhaliev; and Ruslan Suleymanov were all civic journalists, with Bekirov having also recently become an accredited journalist for Grani.ru, one of the few Russian Internet publications that reports on human rights violations in Russia and occupied Crimea.

The full number of political prisoners in this ‘case’ reached 25, after Eskender Suleymanov, the brother of civic journalist Ruslan Suleymanov was arrested on 10 June 2019.  The FSB have also come up with four other ‘suspects’ whom they have placed on their wanted list.

Several ‘trials’ of men arrested after the March operation have already begun, and it seemed likely that the FSB were dragging out their supposed ‘pre-trial investigation’ over the 25 men.  In fact, the men and their lawyers have repeatedly said that there have been virtually no investigative measures and no justification for the men’s ongoing imprisonment.

The FSB could not drag it out forever, and both the men and their lawyers have now been informed that the preliminary investigation is over.  It was learned at this point that there were to be five ‘trials’, not one.  According to lawyer Alexei Ladin, each of these five cases is absolutely identical, which he warns will make all court procedures that much more difficult. For example, he explains, it is unclear what kind of status the defendants in one case will have in the ‘trial’ of the other men.  He calls this “some kind of quasi-juridical procedure because, according to the indictment, there is a whole group of 29, four of whom are on the wanted list.”  The investigators claim that this will not affect what they call “a comprehensive and objective examination of the case”, however Ladin points out how much difficulty the first trial of civic activists and journalists, where there are ‘only’ eight defendants is causing (details of the case here).

Ladin warns that all five ‘trials’ will be made more complicated by the fact that the same witnesses will need to be questioned five times, with lots of discrepancies likely to emerge. For the moment, he says, it’s hard to imagine how it will work.

Not one of the men is accused of any internationally recognized crime, with all accused essentially only of ‘involvement’ in the Hizb ut-Tahrir movement, a peaceful pan-Islamist party which is legal in Ukraine.  Russia is the only country in the world that has declared Hizb ut-Tahrir a ‘terrorist organization’, and has never provided any grounds for the 2003 Supreme Court ruling which was kept secret until it was too late to lodge an appeal.  This inexplicable ruling is now being used as justification for huge sentences on supposed ‘terrorism charges’.   The Memorial Human Rights Centre, which has already declared the men  political prisoners, stresses that Russia has not once, in any of these prosecutions, provided any evidence of “terrorism, or even of plans or discussion of terrorist acts or the use of weapons”.

In at least one of the cases, that of Rayim Aivazov, the FSB have recently changed the charge to the more serious Article 205.5 § 1 – just as they threatened to do when he retracted a ‘confession’ that they had extracted from him through torture. There have been some other changes as well, however the country which invaded and annexed Crimea is also charging all 25 Ukrainian citizens with “planning a violent seizure of power and change in Russia’s constitutional order” (Article 278).  There are no grounds for this charge either, and in fact, the Memorial HRC has often noted that the FSB use the threat of the extra charge as a method of pressure on people to get them to ‘cooperate’ (by accepting the other wrongful charges).  Not one of the Crimean Tatars has agreed to such ‘cooperation’, and Russia is now standardly adding the charge in all cases.