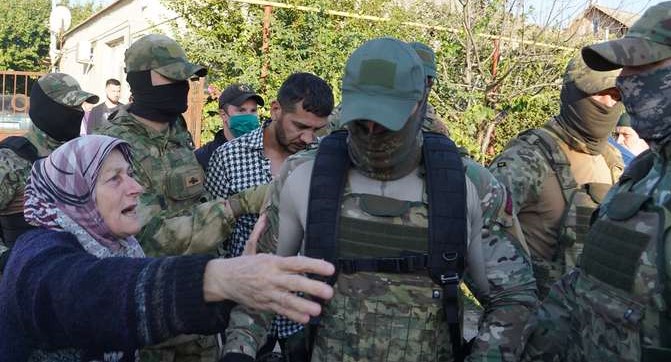 The Russian FSB finally released Crimean Solidarity and Grani.ru journalist Aider Kadyrov in the early hours of 1 September, almost 18 hours after they first took him and three other Crimean Tatars from their homes.  After events that looked much more like an abduction than an FSB ‘investigation’, all four men were finally freed, but face charges of ‘failing to inform of a crime’, under Article 205.6 of Russia’s criminal code (on ‘terrorism’).  The problem here is not only that Russia, as occupying state has no right to impose its legislation in Crimea, but that this article of the criminal code was introduced in July 2016, meaning that the 2015 correspondence on the social network VKontakte which the FSB have spotted  predates the law.  Where there is the will to prosecute Crimean Solidarity journalists or Crimean Tatar leaders, that is, however, unlikely to be viewed as an obstacle.

Although the officers who appeared, together with men in masks, at 6 a.m. on 31 August, did produce some kind of warrant, their actions later were overtly lawless.  Lawyers, called by Crimean Solidarity to represent Kadyrov; Aider Ablyakimov; Enver Topchi and Ridvan Umerov, were prevented from seeing their clients, while members of the men’s families were told – falsely – that the men were not in the FSB building.  This was of particular concern in the case of Kadyrov, who suffers from diabetes and whose blood sugar level can fall dangerously low if he does not receive food.  The FSB were informed of this before they even took Kadyrov away, yet they ignored his condition, clearly hoping to use it to force him to sign the ‘confession’ they demanded of him.   This almost worked as, by 11 p.m. when lawyer, Alexei Ladin was finally admitted, Kadyrov was in such a weak state that he was prepared to sign what they put in front of him.  It seems he did, however, retract his signature.  The lawyer of one of the other men reports that his client was put under pressure to reject his services, doubtless in favour of the kind of FSB-appointed lawyer who is there to sign papers and tell the men that it will be worse for them if they don’t ‘confess’.  With Kadyrov’s father and Alyakimov’s brother having lodged formal reports that the men were missing, and with four lawyers waiting and more than willing to remind the FSB of the men’s rights, the lawyers were finally allowed in, and through the evening their clients were released under signed undertakings not to move away from their homes.

Unlike, at the very least, the FSB abduction of Rinat Paralamov, the men do not appear to have been physically tortured, except that, as Ladin rightly notes, the FSB’s treatment of Kadyrov, because of his diabetes, can be viewed as torture.

The extremely specific nature of the FSB’s supposed ‘fight against terrorism’ is probably the reason why they totally failed to prevent the mass killing of Kerch students by 19-year-old Vladislav Roslyakov in October 2018.  They appear to have an army of people just perusing social networks with the number of years that have passed never a problem, at least not when the aim is to prosecute Crimean Tatar or other Ukrainian civic journalists or activists.

In this case, the men are charged over correspondence allegedly held on VKontakte five years ago with a person called Umidzhon Dadazhonov. The latter is supposed to have called on them to take part in fighting in Iraq on the side of the so-called ‘Islamic State’. While the lawyers wish to see the FSB’s material before commenting themselves, it appears that the men responded to Dadazhonov by telling him that he should stop taking part in the fighting and should return home.  Alyakimov told Grati that he had indeed reacted to Dadazhonov’s calls and told him to give it up.  He is now accused of not having informed the FSB about Dadazhonov and the correspondence.

While most of us would agree that the ‘Islamic State’ is a terrorist organization, Russia could just as easily begin using this ‘non-denunciation’ charge in connection with over 80 prosecutions of Crimean Tatars and other Ukrainians on politically motivated ‘terrorism’ charges.  Denunciations played a major role in Stalin’s Terror and in the Soviet Union in general, and it is designed to have a corrupting effect now too. In all politically-motivated ‘trials’ for supposed terrorism, from that of Ukrainian filmmaker Oleg Sentsov to those against civic journalists and activists for claimed involvement in Hizb ut-Tahrir, an organization that is legal in Ukraine and that only Russia has called ‘terrorist’, everybody has understood from the beginning that convictions are guaranteed.  If such a wrongful conviction were then used to bring criminal charges against people who had not reported the non-existent ‘terrorism’, this could become a new and terrifying weapon against any civic activist, dissident thinker or other Ukrainians under Russian occupation.