Fatal attack on the Vilshany Roma community reaches the court, but not as a hate crimeUkrainian prosecutor accused of brutal attack on Roma hate crime lawyerLocal authorities implicated in fatal attack on Roma residents in Kharkiv oblastTerrifying Precedent Set by Authorities’ Response to Violent Anti-Roma PogromProsecutor refuses to investigate key suspect in murder of Roma leader in Kharkiv oblast Application practice of Article 110 of the Criminal Code of UkraineKey insurgent admits there was no civil war, just Russian aggression A brief description of the KHPG strategic litigations in July–December 2020Criminal proceedings under Article 111 of CC of Ukraine against the journalistsExpert opinion (Amicus Curiae) on the application and interpretation of the case-law of the European Court of Human Rights in criminal proceeding № 52017000000000361Opinion on the political motives of criminal persecution and violation of human rights in the case of Sergiy PashinskyHuman Rights Agenda calls on the government to return to legal means of leaving the constitutional crisisUkrainian life sentence – because they needed to arrest somebodySBU demands that asylum seeker retracts testimony to ECHR about torture in secret SBU prisonsRussian proxy Donbas ‘republic’ threatens to hold hostages until Ukraine agrees to fake electionsA brief description of the KHPG strategic litigations in January – June 2020Dangerous arson attack on prominent Ukrainian anti-corruption activistCivic groups demand protection for Ukrainian journalist who got death threats over controversial articleХарківська міськрада програла суд про перейменування проспекту ГригоренкаFree Yury Dmitriev!
• Topics / Prohibition of discrimination 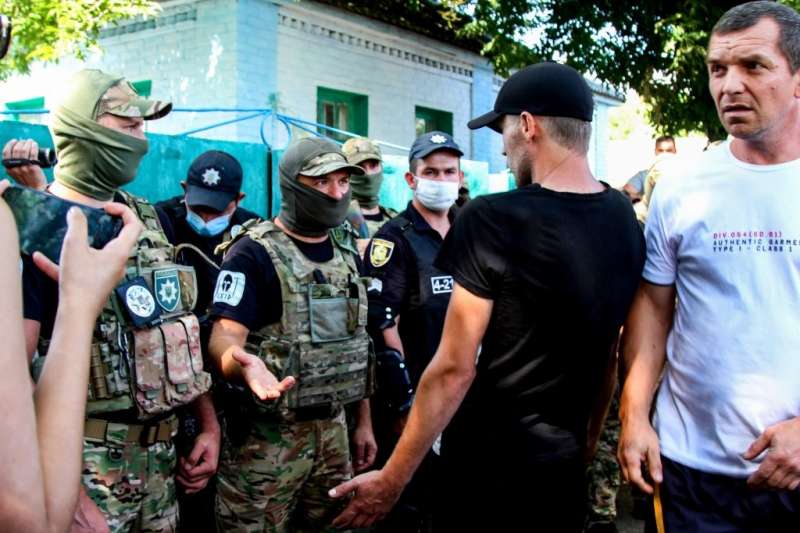 The good news about the anti-Roma conflict in Andriyivka (Kharkiv oblast) on 29 August is that the law enforcement bodies behaved extremely well, very likely averting bloodshed. The bad news is, of course, that an incident involving members of a single Roma family was used to fire up a huge crowd and provoke demands that all of the Roma community in Andriyivka be evicted.  One family almost certainly remains in the hiding place provided by the police, and others have every reason to feel frightened in their own homes.

At a press conference on 31 August, Vadim Matyushenko, Head of the Romen Kharkiv National-Cultural Society, explained that on 19 August, members of a Roma family were celebrating the Orthodox Church’s Feast of the Transfiguration (commonly known as Apple Spas [Яблуневий спас].  One of the men, in an inebriated condition, walked out onto the road and was hit, though not badly hurt, by a car.  Unfortunately, other members of the family got involved, dragging the driver from the car and beating him.  He too, Matyushenko has been told, was not badly injured (although his brother, Vitaly Stepanenko asserts that he ended up in hospital).  This was clearly an illegal thing to do and the police do appear to have initiated an investigation.

What happened a few days later was much more disturbing.  There are around 300 Roma in Andriyivka which has a population of around nine thousand people.  Vitaly Stepanenko, called a public meeting for 31 August (a Saturday morning) in the central square, with this attended by around 500 people.  Stepanenko made the first, incendiary speech in which he claimed that Roma were committing acts of lawlessness, hooliganism and crimes and that the local police and authorities were turning a blind eye to this.  Judging by some of the speeches, people were intent on expressing general discontent with the authorities, however there was a pronounced anti-Roma message, which Stepanenko, in particular, was fuelling.   He specifically accused members of the Roma community of involvement in drugs and drug trafficking, and called on the police to organize a patrol of the village and neighbouring Donets.

Graty correspondent Anna Sokolova noted the telling change in one speaker’s position.   Lyudmila Panchenko, who is herself a deputy of the Donets territorial community, initially defended the authorities, and proposed an initiative group to “resolve problems with the Roma”.  Realizing that the crowd was not supporting her, she became much stronger in using anti-Roma language and making accusations against the Roma.   When somebody from the crowd shouted “Evict them”, she repeated this into the microphone, with the crowd beginning to chant “Evict!”.

Interestingly, Anatoly Nazdrachov, head of the Donets Territorial Community, said that he had been born in Andriyivka and lived in neighbouring Donets, and “had never imagined” that there was such a problem.

Although Nazdrachov spoke as though now convince there was a problem, it is surely relevant that, as a person from the area, he was not aware of anything like this (and mentions that he was taught by some Roma to play the guitar in the ninth grade.)  What Stepanenko and the others have told him “is strange” to him.

However warranted the grievances may or may not be, they are clearly aimed at some of the Roma, while the crowd seems to have become increasingly offensive in their anti-Roma language.  When Mykola Burlytsky, Head of the Kharkiv-based NGO Chachimo and Advisor to the Regional Administration of Roma Issues, took the microphone, somebody shouted: “When will you leave Ukraine?”

Burlytsky is Ukrainian and began his address with the words: “Glory to Ukraine!”  He asked the crowd if there were Roma who were native residents of Andriyivka, with whom they had grown up and received affirmative shouts from the crowd.

The latter had, however, clearly been wound up and were not prepared to hear Burlytsky’s words about this being an issue about the authorities’ actions, not about any specific nationality.

One member of the Roma community, Svitlana Kuzmenko, had come to the meeting and reacted with indignation at the anti-Roma abuse, pointing out that she and her family were law-abiding citizens who had lived in Andriyivka since the 1980s.  There were two local women who supported her and said they had never had any problems with their Roma fellow villagers.

The crowd was not there to hear voices of reason and began what could very easily have ended up as a pogrom.  They pelted eggs and stones at some Roma homes, which were, fortunately, well surrounded by enforcement officers.  It is excellent that reinforcements had been sent, however their presence was doubtless not enough to prevent the children who could be seen in one courtyard being absolutely terrified.   One Roma family was driven away, via a corridor formed by the officers, with the crowd clapping.

The next home was empty when the mob gathered outside, but then a couple arrived with their adult son.  The father went up to one of the men, shook him by the hand and asked why they were there. His wife did not await a response, but walked into the house, returning with her passport, showing that she was a Ukrainian citizen, registered in Andriyivka.

The crowd should have been shamed, but was only fleetingly silenced, merely moving on to the next home.

Stepanenko appears to have produced a ‘protocol on the eviction of the Roma’ but was fortunately told where to go by the head of the Donets territorial community.  The police have initiated criminal proceedings for hooliganism and racial discrimination (Article 161 of Ukraine’s Criminal Code).  It remains to be seen whether this becomes a proper investigation with consequences.

As Vadim Matyushenko pointed out at the press conference, there has been nearly total impunity for other such attacks on Roma communities or individual groups of Roma.

These include the appalling pogrom in Loshchynivka (Odesa oblast) in August 2016, when the police stood by and the authorities effectively initiated eviction of Roma families.  It was only thanks to committed lawyers that, in 2019,  the court finally recognized that the police inaction had been unlawful and awarded compensation.

While an overtly anti-Roma attack in Vilshany (Kharkiv oblast) could not be swept under the carpet, as the head of the local Roma community, Mykola Kaslytsky was murdered, there are obvious signs that the case is being sabotaged.

See: Fatal attack on the Vilshany Roma community reaches the court, but not as a hate crime

After the tragedy at Vilshany, members of Chachimo initiated a pilot scheme in Merefa, Kharkiv oblast. Meetings were organized between members of the Roma community and lawyers, migration and social services personnel as well as medical workers.  There is also now a core group of active members of the community willing to act as intermediaries if conflict arises.

It seems that Burlytsky was approached by somebody from Andriyivka who warned of mounting tension.  Burlytsky actually went to the village and spoke with members of the council, proposing measures like those in Merefa.  Frustratingly, the council members showed no interest in “preventive measures, rather than putting out the fire when it happens” – as it did on 29 August.