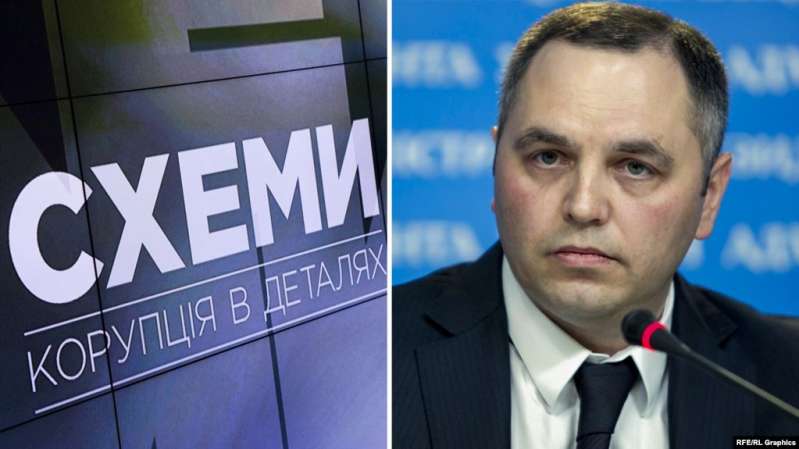 The Pechersky District Court in Kyiv has essentially found that Andriy Portnov was entitled to breach the Personal Data Act with respect to Borys Mazur, one of the drivers for the Skhemy Corruption in Action journalist project because the former First Deputy Head of President Viktor Yanukovych’s Administration objected to the anti-corruption journalists’ investigation into his activities. Radio Svoboda (RFERL) has reiterated its condemnation of pressure on journalists and says that it is planning to lodge an appeal.

The ruling was handed down by judge Svitlana Volkova on 31 August, a mere two weeks after Mazur’s car, which he uses for Skhemy investigations, was totally destroyed in an arson attack.  It was, in fact, Mazur who had brought the civil suit against Portnov, demanding that the latter be forced to remove the personal data, including Mazur’s full address, and the number plate of the car, which Portnov had published on the Internet late last year.  In her ruling, issued without the parties appearing in court, Volkova instead found in favour of Portnov.  She not only rejected Mazur’s suit, but ordered that he pay Portnov’s legal costs (52 thousand UAH).

Daisy Sindelar, Acting President of RFERL, expressed disappointment over the ruling, pointing out that Portnov’s divulgence of personal data had put Mazur in danger of persecution and violence.  She noted the serious arson attack in August.

“This ruling justifies those who are trying to use threats and abuse information in order to intimidate and to create a potential threat for journalists. The fact that the hearing into the case was not open to the public only heightens the additional concern for the safety and legal security of our journalists in Ukraine,” Sindelar stated.  The claimant’s lawyer, Oksana Maksymenyuk, notes that they had asked for the case to be held in an open hearing, but this too was rejected by Volkova, due to what Volkova claimed was the low importance of the case.  There is currently another civil suit awaiting consideration in the same Pechersky District Court, with the judge in that case having agreed to hold an open hearing.

Lyudmila Pankratova, a media lawyer and Regional Press Development Institute Executive Director, is scathing about the ruling and believes it confirms the long-held view that Portnov has influence over Ukrainian courts.

Maksymenyuk points out that in the ruling, Volkova does not mention the claimant’s arguments at all. Nor does she explain how the circulation by Portnov of Mazur’s personal data is supposed to have enabled Portnov to defend himself against the alleged interference in his private life.

Volkova deems Portnov to not be a public figure, since he has not occupied a government or political post since he was dismissed from his post as First Deputy Head of Yanukovych’s Presidential Administration on 26 February 2014.  This in no way explains why he should be allowed to violate Mazur’s right to privacy, but Volkova claims that the Skhemy journalists’ surveillance of Portnov violated his rights.

The other problem with Volkova’s insistence that Portnov is a private individual is that the reason for the Skhemy journalists’ and others’ interest in Portnov’s meetings, etc., is that there are very strong grounds for suspecting that he wields considerable influence over, among others, the State Bureau of Investigations; certain courts and politicians.

Late last year, Portnov began an aggressive offensive against Skhemy over their investigation into his believed links with people in government.  On 31 October 2019, Portnov published personal data of the driver for a Skhemy filming crew, and threatened to continue doing so with respect to other members of the team.  On 2 November, he published three more car numbers, which he claimed were linked with Skhemy journalists. He also accused Radio Svoboda (the Ukrainian Service of RFERL) of ‘megalomania’ and of circulating inaccurate information.  He did not explain why, if the information was false, he was not taking the legal avenues – such as a defamation suit – available to him, but was instead resorting to threats and illegal divulgence of personal data.

On 6 November 2019, the National Police registered criminal proceedings over Portnov’s actions against the Skhemy team.  There is nothing to suggest that any progress has been made.

Radio Svoboda reports that Portnov lodged a counter claim to the police, demanding that criminal proceedings be initiated against the Skhemy team under Articles 182 (violation of privacy) and 171 obstruction of his professional activities.  It is unclear how Portnov, a lawyer, could justify Article 171 which is specifically about protecting journalists from obstruction in carrying out their professional duties.

Volkova has twice been suspended by the Verkhovna Rada from working as a judge due to alleged breach of her oath. The first was in 2007, the second followed her ruling releasing Dmytro Sadovnyk, former Berkut commander, accused of mass killings during Euromaidan, under house arrest. Sadovnyk was able to flee to Russia before the appeal hearing which would have almost certainly revoked Volkova’s ruling.  Criminal proceedings were initiated against Volkova over the latter ruling, under Article 375 §§ 1 and 2 of the Criminal Code (the issuing by a judge or judges of a knowingly wrongful ruling, sentence, etc).  The neighbouring Shevchenkivsky District Court in Kyiv took almost five years to reach a verdict, acquitting Volkova on 26 August 2020.  Although the prosecution has said that it will be appealing, there seems little likelihood that this will succeed since the Constitutional Court ruling in June this year that Article 375 is unconstitutional (details here).