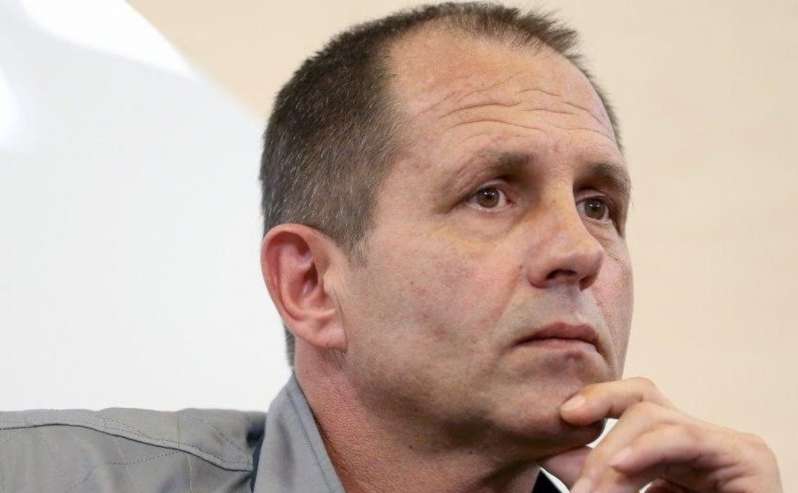 Former Ukrainian political prisoner, Volodymyr Balukh, is in an induced coma in intensive care following the appalling attack near the Hydropark in Kyiv late on 7 September.  He suffered a serious head injury and underwent an operation on Tuesday evening.  It is possible that Balukh was attached to the ventilator because of the operation, since earlier on 8 September, Oleg Sentsov reported that he had regained consciousness, but that he had a broken collarbone and arm.  Due to his condition, the police have not been able to speak with Balukh and ascertain whether he saw his assailants.  For the moment, the police appear to have qualified the attack as a violent robbery, however the Kyiv Prosecutor’s Office reported on Tuesday evening that Balukh’s bag with its contents had been found, presumably in the vicinity of where the attack took place. That would seem to suggest, as does the savagery of the attack, that this was no mugging.

49-year-old Balukh had been meeting with Sentsov and other former political prisoners on the first anniversary of their release from Russian captivity and, according to Mejlis leader and ex-political prisoner Akhtem Chiygoz, the group split up close to midnight. Chiygoz says he can only assume that the attack was a reaction to Balukh’s pro-Ukrainian position, which was evident from the Ukrainian Cossack on his T-shirt.  Since Balukh was only found unconscious in the morning, Chiygoz says, he must have been beaten with particular ferocity.  Chiygoz notes that Balukh is easily able to look after himself and therefore assumes there were several assailants.

Balukh is from Crimea, but has been living in Kyiv since his release in the last major exchange of prisoners on 7 September 2019.  It is very likely that he, Ukrainian filmmaker Oleg Sentsov, journalist Roman Sushchenko and others were released because Russian President Vladimir Putin needed to get Vladimir Tsemakh, a Ukrainian national and either witness or suspect in the downing by a Russian Buk missile of Malaysian airliner MH17 on 17 July 2014 well away from Ukrainian and Dutch investigators.

Balukh is reportedly planning to stand for election as a candidate for the European Solidarity party (of former President Petro Poroshenko in the coming local elections).

It would be a bitter irony were the reason for the attack to prove linked to his pro-Ukrainian position, since this was exactly what led to his persecution in Russian-occupied Crimea and his imprisonment.

Balukh was working as a farmer and civic activist when Russia invaded and annexed Crimea in 2014.  He had begun flying the Ukrainian flag over his home during Euromaidan, and refused to remove it after Russian occupation, with this first resulting in around five administrative prosecutions on absurd charges .  Then, in December 2016, just days after he had nailed a plaque to his home, calling it No. 18 “Heroes of Nebesna Sotnya St, in memory of the over 100 victims of Euromaidan, he was arrested on equally nonsensical criminal charges.

See also details about the moving address by Balukh, Sentsov and Oleksandr Kolchenko to the over 100 Crimean Tatar and other Ukrainian political prisoners still heard in occupied Crimea and Russia.

Update  The police have asserted that this was an attack aimed at robbing Balukh.