Russia and its proxy Luhansk ‘republic’ join Belarus in attack on abducted journalist Roman Protasevich Abducted journalist’s life is in danger in Belarus. Not only his while Lukashenko and Putin get away with terrorismUkraine is illegally deporting activist to Belarus tp face persecution Belarus KGB arrest journalist who identified the Ukrainian Berkut helping Lukashenka regime Belarusian Journalists Handed "Absurd" Prison Sentences For Live Coverage Of Anti-Government RallyMore Than 1,000 Detained In Belarus As Protesters Face Tear Gas, Stun Grenades, BeatingsBelarus: Savage attack and possible 3-year sentences against journalists reporting March against TerrorBelarusian Police Detain More Than 90 As Protests Enter 11th WeekBelarus threatens to use lethal force against protesters as pensioners march for freedomHow post-election protests are creating a new BelarusLukashenka returns Donbas mercenaries to Russia, others, reportedly, on their way to BelarusBelarusian museum director who refused to sign false election protocol found deadLukashenko regime’s savagery may be backfiring in BelarusBelarus initiates ‘mass riot’ criminal charges against detained Ukrainian rights activistsBelarusian Opposition Presents Broadest Challenge Yet To Strongman Lukashenka After Disputed ElectionBelarus: ‘I appeal to all Europe: Please help us, because they’re killing my family’Belarus: Peaceful protester killed in violent crackdown after claimed Lukashenko victoryWhy were Wagner fighters from Russia seized in Belarus and can Ukraine get them extradited?State Media Vs. The Streets: How Lukashenka Lost The Media War In BelarusTop Lukashenka Challenger Babaryka Barred From Belarus’s Presidential Election
• Topics / News from the CIS countries 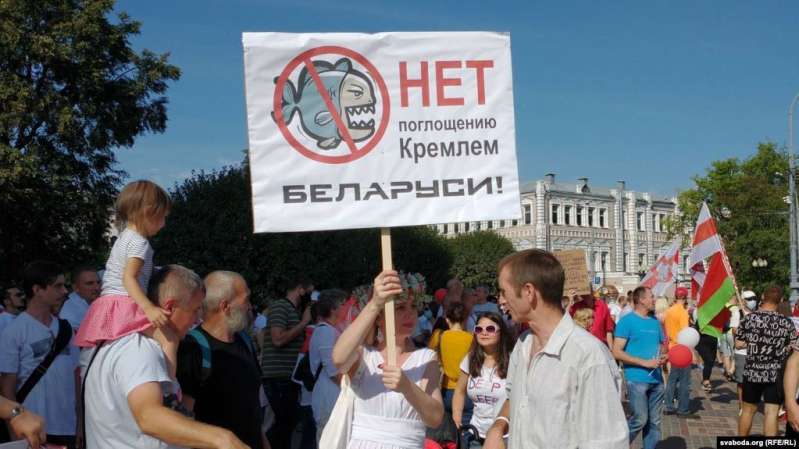 "No to Kremlin takeover of Belarus!" Belarusian protesters increasingly want the Kremlin to stay out of their affairs.

Belarusians have taken to the streets in the thousands every day since a disputed August 9 election, demanding authoritarian leader Alyaksandr Lukashenka step down after a vote they contend was rigged to hand him a landslide win over an opposition candidate who drew unprecedented support before the balloting.

The protests have focused on domestic issues -- namely the future of Lukashenka, who has remained in power for 26 years by suppressing dissent, stifling the media, and staging a series of elections and other votes deemed undemocratic by opponents and international observers.

But on September 3 there was something new, according to observers: Amid the red-striped flags of the first independent Belarusian republic -- the main symbol of opposition to Lukashenka -- there were signs of anti-Kremlin sentiment and messages warning Moscow against meddling in the affairs of its much smaller western neighbor.

Demonstrators held up signs reading, "We’re Belarusians, not a Russian region," and "Putin, who are you with?" according to the Telegram channel Nexta and the Washington-based Institute for the Study of War (ISW), a think tank that is monitoring the events in Belarus.

Lukashenka, who accused the Kremlin shortly before the election of sending mercenaries to Belarus to sow unrest, has now turned to its traditional ally for support amid Western countries’ condemnation of what many consider a rigged vote and the bloody crackdown on the persistent postelection protests.

The September 3 protest followed a meeting earlier that day in Minsk between Lukashenka and Russian Prime Minister Mikhail Mishustin, who reported that progress was made toward deeper integration under the aegis of a Russia-Belarus "Union State" that was created in the 1990s but exists largely on paper.

Mishustin claimed they moved forward on formalizing the Union State’s "Union Cabinet of Ministers" -- a government -- and other "economic measures." The Kremlin claimed Lukashenka said he would "finally dot the i’s" on "very sensitive and painful" Union State agreements in an upcoming meeting with Putin in Moscow.

In the past, Lukashenka has balked at measures such as creating a common currency, and the remarks raised alarm bells among opponents of closer integration.

Opposition leader Syatlana Tsikhanouskaya, who claims she won the August 9 election with 60 to 70 percent of the vote, denounced the meeting.

Tsikhanouskaya, now in Lithuania after arriving in the neighboring state shortly after the election under still-unclear circumstances, said that the sovereignty of Belarus cannot become a bargaining chip and that she doubted that "any decisions and agreements Lukashenka may sign will be recognized by the new government" -- meaning a post-Lukashenka government.

Like other opposition leaders, Tsikhanouskaya has cautioned outsiders against seeing the Belarusian unrest through the prism of a geopolitical showdown between Moscow and the West, and she previously told RFE/RL that the Belarusian opposition had no issues with Russia. But she has called on all countries to respect its sovereignty and will of the people.

Nexta, which has both documented and helped coordinate the protests, issued a post on September 3 reading "Let [Lukashenka’s government] carry out as many negotiations with the Kremlin as they want, but only the people themselves will decide everything." The channel also reshared Tsikhanouskaya’s denunciation of Lukashenka’s meeting with Mishustin.

Nexta "previously had not framed the Kremlin as being the Belarusian opposition’s adversary," the ISW’s George Barros wrote.

Signs of anti-Moscow sentiment among the protesters were "[b]oth very significant and predictable (indeed, predicted)," said Nigel Gould-Davies, a former British ambassador to Belarus and a senior fellow at the London-based International Institute for Strategic Studies, wrote on Twitter.

But they are not predominant. Hanna Baraban, a Belarusian journalist and analyst, said that "the main focus of the protesters remains on the numerous domestic political issues."

"Of course, some people are unhappy about the actions of Russia or the West, but these moods never take an actual place in the protesters’ political agenda," Baraban told RFE/RL by e-mail.

’Lukashenka On A Short Leash’

Indications that Lukashenka may be bending over backwards to please the Kremlin, and increasingly taking rhetorical cues from the Russian government, could change that.

On September 3, Lukashenka accused Ukraine of supporting the demonstrations in Belarus, a day after Russian Foreign Minister Sergei Lavrov claimed without evidence that 200 Ukrainian neo-Nazis were operating in Belarus.

Ukrainian analyst Yevhen Mahda, executive director of the Kyiv-based Center for Social Relations, told RFE/RL’s Belarus Service on September 5 that the Kremlin had "Lukashenka on a short leash...parroting the thoughts and words of Russian Foreign Minister Lavrov."

According to Mark Galeotti, an expert on Russian security agencies and a senior associate fellow at the British-based Royal United Services Institute, Tertel has close ties to Russia’s Federal Security Service (FSB) while Vakulchik "was a fierce guardian against Moscow penetration."

The reshuffle came amid reports that the FSB may be advising Lukashenka’s government on ways to disperse the protests, as reported by Bloomberg, which noted a Russian plane belonging to the FSB was detected arriving in Minsk from Moscow on August 18.

George Kent, a U.S. deputy assistant secretary of state who oversees policy toward Belarus at the State Department, said on September 2 that the United States and its allies would have a tough response if Russia intervened in Belarus.

Putin has made remarks that seem intended as warnings to the Belarusian opposition and the West -- and reassurances to Lukashenka -- that such intervention could occur. On August 27, he said on state TV that he had formed a police reserve force that could be sent to Belarus if necessary, but that so far the situation had not reached that point.

With the Kremlin seemingly firmly in his corner, Lukashenka is taking harsher action on anti-government protesters, according to Alex Kokcharov, a London-based country risk analyst. "Lukashenka is clearly acting more boldly now, as he has the support of the Kremlin,” Kokcharov told RFE/RL.

Days after Lukashenka’s meeting with Mishustin and the reshuffle at the KGB, Belarusian riot and regular police rounded up 600 people at the "March of Unity" demonstration in Minsk on September 6.

"These were the most massive and violent arrests in the country since the arrests during the first three days after the elections," Baraban said. One of Lukashenka’s aims, she said, was to prove to the Kremlin that he is "fully supported by a massive security-forces apparatus that deserves Moscow’s support as well."

"The second goal is to show the West that Belarusian authorities will play by their own rules, not caring about sanctions and other restrictive measures...imposed on them by the EU and United States," she added.

A day later, on September 7, unidentified men abducted opposition leader Maryya Kalesnikava and two of her staffers, Anton Randyonkau and Ivan Kratsou. Western calls for her release increased on September 8, after officials in Belarus and Ukraine said she had been detained after foiling an effort to force her out of Belarus by ripping up her passport at a border post.

According to Kokcharov, Russia’s backing is emboldening Lukashenka while making enemies among average Belarusians -- many of whom will watch nervously when Putin and Lukashenka, who are expected to meet in Moscow in the coming days, hold what would be their first known in-person talks since the disputed election.

"Russia keeps doing it," Kokcharov said. "How to lose friends and alienate people."