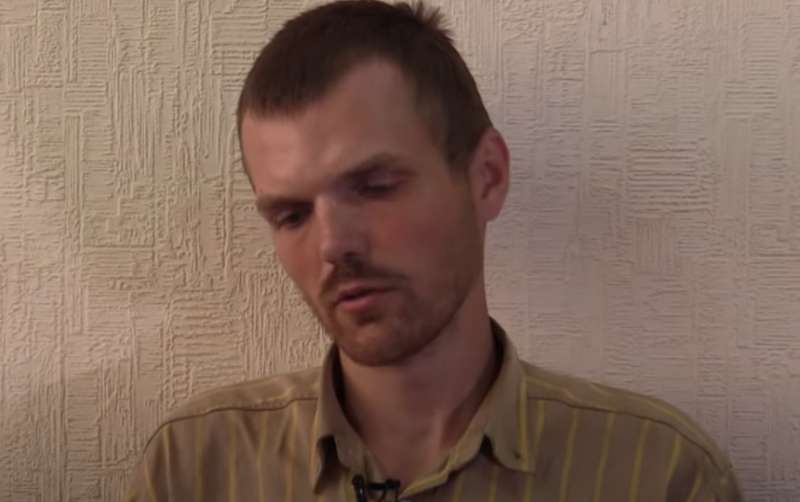 Hryhory Sinchenko is in a prison hospital in occupied Donetsk after slashing his wrists, his mother has reported.  According to Tetyana Hulevska, her son was savagely beaten with the militants trying to get him to give up his lawyer and to sign whatever they demanded of him. The 29-year-old, she says, used the blood to write a protest against the torture.  He has said that one of the men involved in the torture is the so-called ‘investigator’ Stanislav Koshevy.

The self-styled ‘Donetsk people’s republic interior ministry’ posted a video of Sinchenko on 6 July 2020, a week after his mother reported that he had been captured for the third time.  He looks shockingly thin and as though he has been beaten.

It is Sinchenko’s lawyer who is providing his mother with information, which is clearly the reason why the ‘DPR militants’ are trying to force Sinchenko to get rid of him.

The young man is originally from Makiyivka in ‘DPR’, but had been living in Kherson.  He has disability status which is the reason that he was unable to serve in the Ukrainian Armed Forces.  Officially, it was in order to reinstate medical records that he returned to occupied Donbas in 2016. In Makiyvka, Sinchenko became involved in a partisan group opposing the Russian-controlled militants, and was taken prisoner by the so-called ‘DPR ministry of state security’ on 2 December 2016.  He was accused then of blowing up cigarette kiosks, and was savagely tortured, including with the use of electric shocks, asphyxiation and being suspended for several hours by handcuffs.  His mother says that he was so badly beaten that he suffered a collapsed lung and almost died in the prison.  In typical fashion, the militants’ ‘search’ on that occasion equated to primitive plundering of everything valuable from their house, including home appliances and her son’s instruments for fixing things.

Sinchenko was released in the December 2017 hostage release, but was unwilling to accept the injustice of what was happening in Donbas, and returned there.

In October 2018, the militants brought the young man, covered in blood, to his grandmother’s home and carried out a search, supposedly for explosives.  None were found, however Sinchenko was taken away again.  He was not released in  either of the two exchanges, in December 2019 and April 2020, and essentially nothing was heard of him until the militants posted a ‘wanted notice’ on 21 May 2020.  That said nothing about Sinchenko having been imprisoned.  It claimed that he was wanted “for a grave crime”, described him, and offered a reward for information leading to his capture.  His mother then pointed to the obvious signs that he had been beaten, as well as to certain ominous marks that were likely burns from electric shocks used as torture.

Hulyevska learned from their lawyer that Sinchenko was captured on 29 June.  It seems that the militants seized Sinchenko’s younger sister, Olha, a week earlier and began trying to beat out of her where Sinchenko was.   The young man had obviously understood the danger his family would be in and had only contacted his elderly grandmother, however Olha was held prisoner until after her brother was seized.

As feared, Sinchenko has obviously been subjected to even worse torture since his capture.  The militants accuse him, among other things, of involvement in the blowing up of a Donetsk radio tower on 27 October 2019.  As reported, on that occasion a video of the blast at a radio tower servicing the Fenix mobile operator was posted on YouTube, together with an ultimatum.  The latter made it clear that those who had planted the explosive device did it in protest at the widespread use of torture and ill-treatment in the self-proclaimed ‘Donetsk people’s republic’s’ illegal prisons.