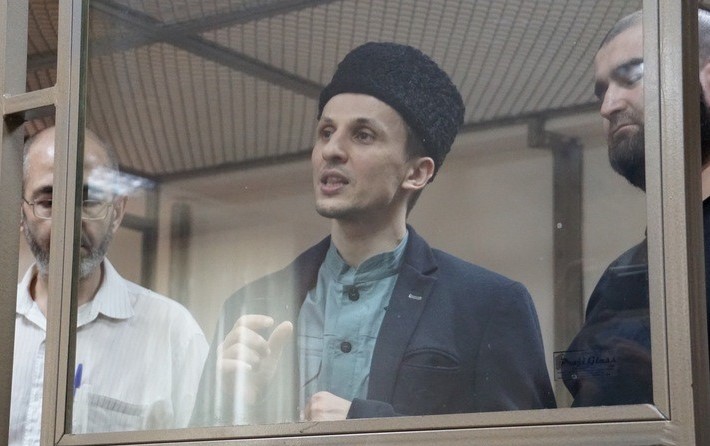 At 34, Server Mustafayev was probably one of the youngest recipients of the state honours announced by Ukrainian President Volodymyr Zelensky on 24 August (Independence Day).  His award was well-deserved, yet poignant as, for the second time, Mustafayev has been honoured by his compatriots while himself a political prisoner in Russia.  As Coordinator of the important Crimean Solidarity civic initiative, Mustafayev was one of eight Crimean Tatar civic journalists and activists from Bakhchysarai arrested in October 2017 and May 2018.  At the time, this was Russia’s most brazen offensive against those who were seeking to help victims of repression and to ensure that the world knew what was happening in occupied Crimea.

In his final address to the Russian ‘court’ in Rostov on 10 September, Mustafayev explained that he is a Ukrainian citizen, a political prisoner and prisoner of conscience.  This is the way the world sees him and the other men, and the court will not change that by refusing to include resolutions from international bodies and other documents in the case material.

Any sane person has a general image of terrorists, which neither he, nor any of his fellow defendants, as socially responsible citizens, men with a higher education, working to support their families, in any way ‘fit’, Mustafayev says. Whether as volunteer, philanthropist, civic journalist or human rights activist, or simply as a person who will not look away when others are in need, all have played an active and positive role in their community.

Even the Russian Constitution guarantees the right to freedom of speech and views, yet it is Russia’s violation of this fundamental right that has led to their persecution and to all the repression in Crimea since 2014.

“I regret only that, having done a lot in journalism; human rights and humanitarian areas since 2014, we were not able to stop the insatiable and bloodthirsty enemy and aggressor. I regret that in some things I did not manage, or couldn’t in time and sufficiently pass on to the public and to the world the true picture of Crimean reality about the “return to a native harbour” and “life in illusory-Russian Crimea”. <>

The events of 2014 overturned everything in Crimea, Ukraine and the world, and, of course, they touched on him, the men he is on trial with and all of the Kremlin’s political prisoners.

“I am not afraid that my voice will not change anything.  I am convinced that changes are already taking place, however many people believe that their voice will achieve nothing and they soothe themselves with that.  Many think that if you want something more for the country, for your people or for themselves personally, as a citizen, that it will be even worse.  They think that if you go against the system, the system will crush you. Yet we do make our choice in this world.

I and the Kremlin’s other political prisoners chose not to be silent about what was happening, not to wait for others somewhere to struggle for a better life, for their rights. <>

I would like to call on those now in this courtroom, those who can see, read or hear us beyond this conveyor belt of ‘terrorists’ to use common sense and to be honest to yourselves.  It is impossible to live simply and silently, as though nothing has happened.  Impossible to steer clear of politics, to remain deaf and blind in the face of evident injustice, formally coated by law, which is lawlessness. <>  It is stupid to think and hope for a glorious future after the lawlessness from Russia in 2014. Find strength within yourselves to look truth in the eye, nobody will do that for you.

We are all somebody’s children, we also have our own children, grandchildren. I am the father of four children. I don’t want my children, my people to live in a country of threats and intimidation; of humiliation and torture; of abductions and illegal arrests; of aggression and repression. I know that everyone is against all of that, against what is happening in Crimea.  Even that small number of witnesses allowed in this court, those hundreds and thousand of people who are not indifferent and who support and show solidarity with us at liberty in Crimea, Ukraine and the world  are the best example of this. <>

However much Russia may hate our determination to defend ourselves, to not be silent in the face of injustice, however much it may dislike our lack of loyalty to the Russian aggressor – we were never slaves in the past, and today we will not be subjugated and will not become your slaves.”

Server Mustafayev and his family

Although born in exile in Uzbekistan on 5 May 1986, the Mustafaye family returned to Crimea when Server was still very small.  Mustafayev has a higher education in construction and architecture, however has mainly worked in business and retail.  He married in 2009, and the couple have two sons Yunus and Yusuf and two daughters – Dzhemilye, who is the eldest and little Nadzhiye.

As he has explained, everything changed in 2014, and he began spending a lot of his time helping the families of political prisoners.  From 2016, he was one of the coordinators of Crimean Solidarity which not only continued such work in helping the imprisoned men and their families, left without the main breadwinner, but also sought to inform people in Crimea, mainland Ukraine and beyond about the mounting repression under occupation.

It was immediately evident that his arrest was linked with these human rights and journalist activities and Amnesty International very soon recognized him as a prisoner of conscience.  All of the men are also recognized political prisoners.

Six men were arrested on 11 October 2017: well-known volunteer, philanthropist and civic journalist Suleyman (Marlen) Asanov;  three other civic journalists:  Ernest Ametov;  Timur Ibragimov and Seiran Saliyev; Memet Belyalov and Server Zekiryaev, both of whom had actively sought to help political prisoners and their families.  Then on 21 May 2018, the FSB came for Crimean Solidarity Coordinator and civic journalist Server Mustafayev and Edem Smailov.

Asanov and Saliyev both spoke during their final addresses of the totally gratuitous violent operations.  All that was required was for the men to be sent a summons and each would have appeared when demanded.  That, however, is not the point of these operations which are widely reported in the Russian propaganda media and clearly aimed at instilling terror in Crimean Tatars and to get others to leave for mainland Ukraine.

These are based solely on unproven allegations of involvement in Hizb ut-Tahrir, a peaceful Muslim organization which is legal in Ukraine.  In declaring all Ukrainian Muslims arrested on such charges to be political prisoners, the renowned Memorial Human Rights Centre has repeatedly pointed out that Russia is in breach of international law by applying its own legislation on occupied territory.  It has, however, also noted that Russia is the only country in the world to have called Hizb ut-Tahrir ‘terrorist’ and the Russian Supreme Court did so in 2003 at a hearing which was deliberately kept secret until it was too late to lodge an appeal.  In occupied Crimea it is increasingly using such prosecutions as a weapon against civic activists and journalists.

Initially, the FSB designated only Asanov as ‘organizer of a Hizb ut-Tahrir group’, with the charge under Article 205.5 § 1 of Russia’s criminal code carrying a potential life sentence.  The other men were all charged with ‘involvement in such an alleged ‘group’ (Article 205.5 § 2, with the sentences up to 20 years).  For no apparent reason, this changed in February 2019 when it was announced that Belyalov and Ibragimov were now also facing the ‘organizer’ charge.

The prosecution’s case is essentially based on the following:

the testimony of Ukrainian turncoat Nikolai Artykbayev, who breached his oath of allegiance to Ukraine, given when joining Ukraine’s Security Service [SBU], and is now working for the Russian FSB.

two secret witnesses whose identity and motives for testifying are known:

Konstantin Tumarevich (who used the pseudonym ‘Remzi Ismailov’) is a Latvian citizen and, seemingly, fugitive from justice in that country, who is unable to legally live in any other country as his passport has expired.

Narzulayev Salakhutdin (whose testimony was under the name ‘Ivan Bekirov’).  He is from Uzbekistan and does not have legal documents.

Both men are clearly in a position to face blackmail by the FSB, yet despite much of their ‘testimony’ being demonstrably false, presiding judge Rizvan Zubairov constantly prevented the defence from challenging the men.

Such ‘secret witnesses’ are one of the bases for all such political trials, with the prosecution and court never giving any good reason for concealing their identity. In this case, the defendants do know who the men are, and it is very clear what levers Russia can use to force out their testimony.

It is only such ‘secret witnesses’, or men working for the enforcement bodies, who testified against the men.  A huge number of other witnesses were prevented from giving testimony, including the Mufti of the Autonomous Republic of Crimea, now living in Kyiv.  Zubairov essentially did not conceal the fact that he and the other judges were not interested in hearing anything that proved the men’s innocence.

‘Expert assessments’  In all such cases, the FSB chooses its ‘experts’ on the basis of FSB loyalty, not competence to give an opinion.  Yulia Fomina and Yelena Khazimulina, from Ufa in Bashkortostan, are linguistics, with no professional knowledge of either religious studies and psychology, while Timur Zakhirovich Urazumetov  has an education in history and cultural studies, not in religious studies.  It is these three individuals, who claimed to have found, in badly taped and transcribed, conversations in a Mosque, ‘indications’ that the men had links with Hizb ut-Tahrir.  An independent forensic linguist, Yelena Novozhilova, was scathing in her assessment of such ‘expertise’.

Despite the lack of any recognizable crime, or of proper evidence, prosecutor Yevgeny Koptilov has demanded record-breaking sentences of between 15 and 21 years, with a 17-year sentence demanded against Mustafayev.

There is, tragically, no suspense over the verdict, with this essentially true of the huge number of ‘trials’ of Ukrainian citizens at the Southern District Military Court in Rostov.  Announcement of sentences is scheduled for 15.00 on 16 September.