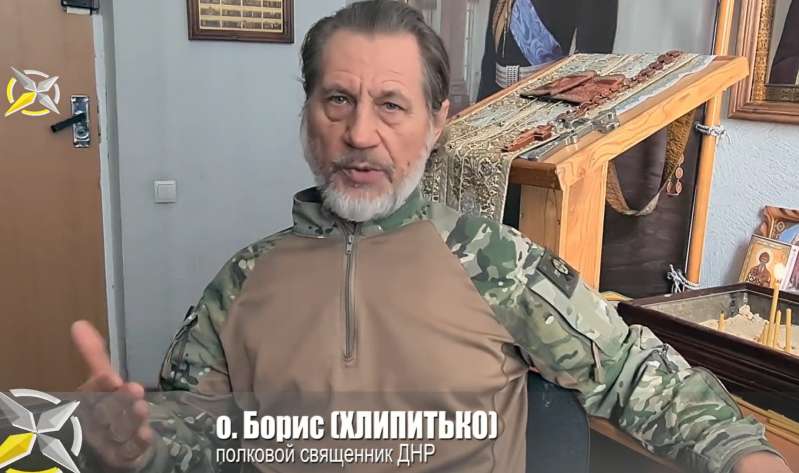 Ukraine’s SBU [Security Service] has informed of criminal proceedings against a Russian priest working as chaplain for the self-proclaimed ‘Donetsk people’s republic’ [DPR].  They cite considerable witness testimony that the ‘priest’ took part in the interrogation and torture of Ukrainian prisoners of war, and although the report does not name the man, it is likely that the individual in question is Boris Aleksandrovich Khlypytko  [Хлипитько].  The latter has never concealed his very specific understanding of Christianity and of where ‘God’ stands with respect to the fighting in Donbas.

The SBU’s notification that “the Russian priest of one of the Churches” is under suspicion has been issued in absentia.  The SBU say that he was a priest in one of the churches in Donetsk and that, in 2014, he joined the ‘Vostok regiment’ as a military chaplain and field priest, and that he was later promoted to the position of assistant to the commander for work with militant believers.  The SBU have documented evidence of the priest’s participation in interrogations and torture, and say that he also gave instructions on the illegal imprisonment of hostages.  The charges he will face, if caught, are under Article 258-3  § 1 of Ukraine’s Criminal Code (creation of a terrorist group or organization).

Although Ukrainian media have all reported that the SBU identified the suspect, it was, in fact, Myrotvorets that posted Khlypytko’s photo and linked him with the SBU report.  Certainly the details do seem to fit, although there is possibly a question mark over what is meant by “Russian priest”.  According to Myrotvorets, Khlypytko was born on 19.01.1950 in Gukovo, the Rostov oblast of what was then the Russian SSR.  Before Russia’s military aggression and the war in 2014, Khlypytko was, however, an archpriest of the Orthodox Church under the Moscow Patriarchate in Moslino (Donetsk oblast).  He became a priest only in 1993, having worked before that in mining, presumably in Donbas.

There are numerous videos with Khlypytko on YouTube, so those witnesses of the priest who used his wooden cross to hit wounded POWs from Donetsk Airport around the head, will have surely been able to say whether the sadist that they saw was Khlypytko.

While Khlypytko does not publicly speak of taking part in torture, he can be seen playing a very active role in providing religious cover for the military aggression in Donbas, in support of ‘Russian world’ ideas.  In one video, for example, he asserts that “We are defending this land in order to preserve it for normal people…. They [those they are fighting] are not people, and have doomed themselves to extermination.  Such is the will of God”.

Final victory, Khlypytko claims, is still in the future, “but we must remember one important thing: war is the smithy that forges real people, that is called upon to build a real, correct, human society”.

Khlypytkov’s ‘God’ is, in all his pronouncements, unwaveringly on the side of the Russian and pro-Russian militants.  There is, also, he says in an interview, an information war underway which it would be “a crime” not to take part in, and claims that this is about telling people the truth and ‘enlightening’ them.

Most worrying is undoubtedly the religious coating that Khlypytko is giving to the overt militarization of children in occupied Donbas.  He can be seen here, in 2015, for example, ‘blessing’ young kids in military gear, including at least one who looks no more than 12,  His ‘blessing’ is of those who, in his rendition, are “presently defending our motherland from the enemies who want the power of Satan on our holy land. But we will never allow this”.

At least two of the Ukrainian ‘Cyborgs’ defending Donetsk Airport who were taken prisoner by Russian or pro-Russian fighters have said that their tormenters included a man wearing the clothes of an Orthodox priest, who used his cross as a means of torture.  Oleksandr Mashonkin spent 197 days imprisoned by fighters from the so-called ‘Donetsk people’s republic’ [DNR] before being freed on Aug 6, 2015.  During that period he was subjected to all kinds of torture, including a hot iron on his hands.  He  told Radio Svoboda that a “priest came, apparently from the Moscow Patriarchate, with a cross. He beat us with that cross around the head, perhaps he thought that would drive out our sins, he said we were monsters.”  When he broke the wooden cross on a prisoner’s head, he brought a metal one, and continued to hit them.

Yuri Shkabura recalls that the man came to ‘Motorola’, asking for “a couple of slaves”, and then “came up to us and began screaming that we’re traitors, Judases, and hit the guys with a cross around the head”.

Some of the men who survived have confirmed that it was Russian mercenary ‘Motorola’ (Arsen Pavlov) who killed Cyborg Ihor Branovytsky.  His mother has demanded investigation of all cases where her son and other Ukrainian prisoners were tortured, including by the man in Orthodox priest clothes.

Radio Svoboda was assured by Yevhen Samoilenko from the Ukrainian Orthodox Church of the Moscow Patriarchate that no priests are taking part in torture.  He added that if such behaviour were proven, the person would be stripped of his right to serve. It remains to be seen whether that happens, as the very public videos with Khlypytko already demonstrate views and behaviour unbefitting any representative of a religious faith.

In a 2015 study entitled ‘When God becomes the weapon’,   Ukraine’s Centre for Civil Liberties and International Partnership for Human Rights presented considerable evidence of religious persecution by militants in Donbas, and of  the role played by Russia and its armed criminal ‘crusaders’ in crimes against humanity in the region.