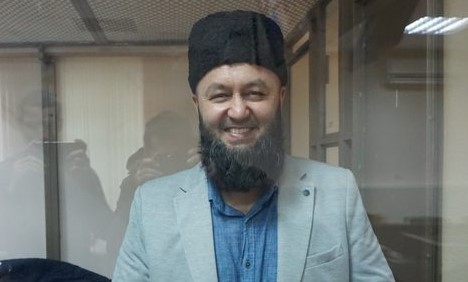 Crimean Tatar civic journalist and political prisoner, Marlen Asanov was told by a Russian FSB investigator that it was his own fault that he was imprisoned.  They had given him warnings to leave Crimea, the FSB man said, but he had refused to take heed.  He was, in short, no criminal, just a person that the Russian occupation regime didn’t want in Crimea.  On 16 September 2020, Asanov was sentenced by a Russian court to 19 years’ imprisonment.  He was not accused of any actual crime, and the ‘evidence’ presented in court of ‘involvement’ in a peaceful organization which is legal in Ukraine was provided by dodgy ‘secret witnesses’ and ‘experts’ with no professional competence to give such assessments.

Marlen (Suleyman) Asanov (b. 2 March 1977) is by profession a teacher of Crimean Tatar Language and Literature, however in 2002 he created Caravansary ‘Salachik’ [Караван-сарай «Салачик»].  While described in most travel books merely as a restaurant, the Salachik website explains that it is (or was) a Crimean Tatar cultural-ethnographic centre made up of a complex of architectural structures intended for the accommodation and relaxation of travellers (caravaners) and guests.

Asanov was also very active in public life and, even before Russia’s annexation, was known for his philanthropy. He and his wife Ayshe have four children – three sons (Said, Seitmamut and Eskender) and the youngest, a daughter, Safiye. Said, whose childhood came to an abrupt end on 11 October 2017, had always wanted to be an architect.  He is now planning to become a lawyer, to help victims of injustice.

It is typical that the Russian occupation regime should have targeted both Asanov and the Salachik Crimean Tatar cultural and ethnographic centre.  In announcing on 27 April 2018 that a court, at the request of the prosecutor, had forced it to close, the Salachik administration noted that they had been subjected to systematic searches, checks and other measures since 2014.  The worst of these was on 12 May 2016 during the armed searches and arrests of four Crimean Tatars from Bakhchysarai.

Asanov was charged on that occasion with ‘infringement of public order’ and fined.

This administrative prosecution and the constant searches, etc. were, as the FSB man said, supposed to drive Asanov out of Crimea.

Instead, he became much more actively involved in helping the families of political prisoners, for which he was named Ukraine’s Volunteer of the Year in 2017. He also allowed Salachik to be used for the monthly meetings of Crimean Solidarity.  This important civic initiative began in April 2016 in response to the mounting persecution in occupied Crimea.  Crimean Solidarity activists both help political prisoners and their families, and seeks to ensure that information about repression is streamed onto the Internet and circulated, including abroad.

It is probably the role Crimean Solidarity plays in defying Russia’s information blockade that has particularly riled the occupation regime.

Armed and often masked men burst into homes where small children were sleeping and forced men who had never committed any crimes to the ground, before taking them away in handcuffs.

Asanov and the others were effectively accused only of unproven ‘involvement’ in Hizb ut-Tahrir, a peaceful Muslim organization which is legal in Ukraine.  In declaring all Ukrainian Muslims arrested on such charges to be political prisoners, the renowned Memorial Human Rights Centre has repeatedly pointed out that Russia is in breach of international law by applying its own legislation on occupied territory.  It has, however, also noted that Russia is the only country in the world to have called Hizb ut-Tahrir ‘terrorist’ and the Russian Supreme Court did so in 2003 at a hearing which was deliberately kept secret until it was too late to lodge an appeal.  Russia has never explained how an organization that is not known to have committed any acts of terrorism or violence anywhere in the world can be ‘terrorist’. Instead, it is simply using this label to enable huge sentences against men who have committed no crime.

Initially, it was only Asanov who was charged with the more serious ‘organizer’ role under Article 205.5 § 1 of Russia’s criminal code.  In February 2019, however, the same charge was also brought against Belyalov and Ibragimov.  Given the greater sentences that this entails, the FSB’s reasons for designating a person ‘organizer’ seem frighteningly arbitrary.  The other men were charged with ‘involvement in such an alleged ‘group’ (Article 205.5 § 2).  All eight men were also charged (under Article 278) with ‘planning to violently seize power’.  This additional charge is believed by Memorial HRC to be generally used against people who refuse to ‘cooperate’ with the investigators (which all Crimeans in these cases have refused to do.

No crime, no evidence and sentences handed down by a court of the occupying state which is prohibited by the Geneva Convention from applying its legislation on occupied territory.  The only bright moment was the acquittal of one of the men – Ernes Ametov.  Such acquittals are almost unheard of in Russian courts, however any assumptions about justice from the court should be swiftly abandoned since all eight men should have been acquitted.

PLEASE WRITE TO MARLEN ASANOV AND THE OTHER MEN!

They have all recently been moved to the same ’SIZO’ [remand prison] where they will probably be held until the appeal hearing.  Letters are extremely important, telling them  – and Moscow - they are not forgotten.