Tortured and jailed or killed for the Ukrainian Flag and for supporting Ukraine in occupied DonbasWhy expel Russians ‘planning crimes for the Kremlin’ when Russia holds so many Ukrainian political prisoners?Prisoner exchange leaves most Donbas hostages in captivity and makes journalists suspiciousDesperate plea to Zelensky from relatives of hostages once again forgottenRussian-controlled Donbas militants finally free severely disabled pensioner but not her invalid sonRussian proxy Donetsk ‘republic’ sentences Ukrainian war veteran to 16 years for defending UkraineRussian-controlled militants sentence 70-year-old pensioner to 17 years for ‘spying’ after torturing him and his familyAgonizing silence about Ukrainian sportsman abducted by Russian military in DebaltsevePrisoner exchanged for Ukrainian hostages gets 17-year sentence in Russian proxy Luhansk ‘republic’MPs challenged to fight Russian repression by adopting a Ukrainian political prisonerKremlin hostages’ lives in danger while Russia exploits Covid-19 to further restrict their rightsUkraine’s government steals money allocated for Kremlin hostagesRussian-controlled Luhansk militants claim young hostage ‘spied’ for Ukraine as a 16-year-oldRussian proxy Donbas ‘republic’ threatens to hold hostages until Ukraine agrees to fake electionsUkrainian hostages not forgotten but Russia understands only the language of ransoms and sanctionsEmpty promises from Ukraine’s leaders as release of Kremlin’s hostages ‘buried’Ukrainian living in Spain taken prisoner by Donbas militants for removing a Russian flagUkrainian researcher tortured & sentenced to 13 years for ‘treason’ against a fake Russian proxy republicDonbas militants sentence doctor to 13 years for pro-Ukraine Twitter postsPrisoner exchange leaves most Donbas hostages in captivity and makes journalists suspicious
• Topics / The right to liberty and security 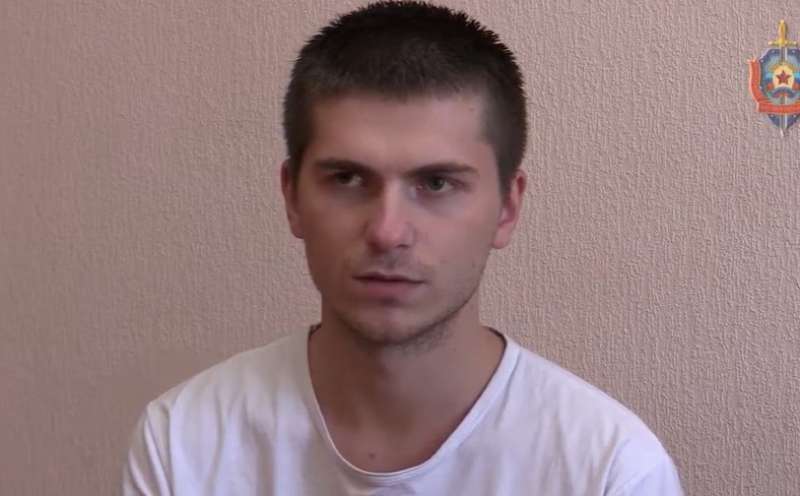 Militants from the self-proclaimed ‘Luhansk people’s republic’ have seized a 21-year-old man from Luhansk and accused him of passing ‘state secrets’ to Ukraine’s SBU [Security Service].  He is claimed to have been ‘recruited’ by the SBU, aged just 16.

As usual, the so-called ‘LPR ministry of state security’ have forced the young Ukrainian to ‘confess’ in front of a camera.  We know from former hostages that Lilipa is likely to have been physically tortured, and he certainly seems hesitant, as though frightened of saying the wrong thing.

None of these videoed ‘confessions’, nor those of the Russian FSB which the militants imitate, are ever convincing, but this one seems particularly absurd.  The SBU are supposed to have recruited the then 16-year-old Lilipa when he was crossing the checkpoint at Stanitsya Luhanska in 2015.

The SBU are presumably supposed to have not known that Lilipa’s age would have made any signed agreement on cooperation quite meaningless.  The young man says on the video that he was persuaded to sign such a document and given the code name ‘Slava’, on the promise that he would be given a job in the SBU when he turned of age and that his relatives would be able to cross the checkpoints without obstruction.  Back in 2015, he is supposed to have been instructed to gather information about so-called ‘military servicemen’ and armed units, and then passed this on via social media and Twitter.  This year, it is claimed, his SBU handlers instructed him to infiltrate the so-called ‘LPR armed forces’, collect and pass on “information containing state secrets”. He was purportedly seized while trying to hand the SBU information about the numbers in such armed units.  That slightly clashes with another claim, doubtless demanded of him, namely that he was threatened with problems by the SBU when he stopped giving them information.  It is also possible that the whole point of this story was for propaganda about the depraved SBU who supposedly recruit teenagers.

No independent information is available about the young man, except that there is a Vladislav Lilipu whose Facebook page is either empty or only for personal contacts.  This asserts that the person studied at ‘the ‘Luhansk internal affairs academy named after E.A. Didorenko, whose graduates appear to swear allegiance to the so-called ‘Luhansk republic’.

The ‘LPR ministry’ speaks of “collaboration with foreign security services” and says that this is punishable by 20 years’ imprisonment.  Although this ‘republic’, set up, financed and controlled by Russia, has not even been recognized by Moscow, it appears to be accusing Lilipa of ‘state treason’ and ‘spying (articles 335 and 336, respectively, of the so-called criminal code).

Over 200 civilian hostages or POWs are known to be held by the ‘Luhansk and Donetsk people’s republics’, although the real figure may well be higher.  The following are just some of the hostages almost certainly seized for their pro-Ukrainian position.