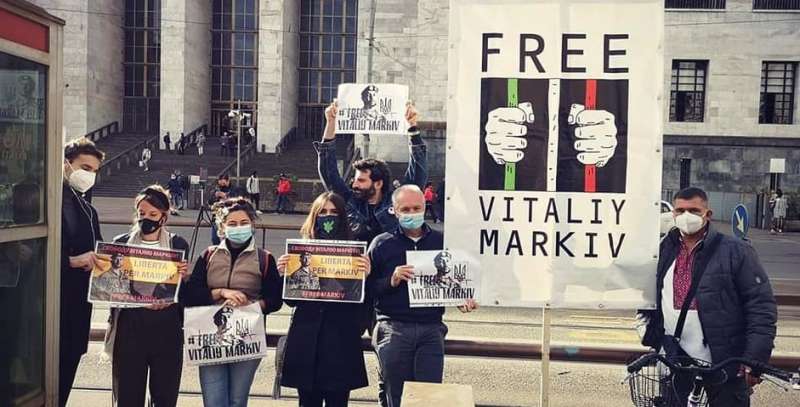 The Milan Court of Appeal has begun hearings into Ukrainian soldier Vitaly Markiv’s appeal against his 24-year sentence for a tragic death in crossfire that he could not have had anything to do with.  During the first hearing on 29 September, the defence specifically asked that the court order the investigative activities and expert assessments that will demonstrate Markiv’s innocence.  It is one of the many extraordinary aspects of this trial that the prosecutor never carried out any investigations at the place in eastern Ukraine where Italian journalist Andrea Rocchelli and his interpreter Andrei Mironov were killed on 24 May 2014.  Without investigative experiments and forensic analyses, the prosecution has claimed that Markiv knowingly set Ukrainian soldiers on the journalist whom he could not possibly have seen.

The defence has asked the court: to carry out an investigation of the actual site of the tragic events; forensic ballistic and sound assessments; to allow the testimony of 20 new witnesses, identified in a recent Ukrainian investigation; and to include in the hearings a 30-minute technical part, regarding weapons, visibility and with comments from Italian experts, of the documentary film The Wrong Place.   The prosecution, represented by Nunzia Ciaravolo, objected to all of this, asserting that the experts interviewed were expressing ‘value judgements’ and that no more proof was required.  Since a forensic examination of f Markiv’s Kalashnikov rifle alone, and of the distances involved, could demonstrate that the charges were based on the false premise that Markiv could see the journalists, this is manifestly untrue.  The court, under presiding judge Giovanna Ichino, is due to give its decision on 1 October.

Due to the pandemic, the hearings are taking place with very restricted access for the media and without members of the public.

31-year-old Andrea Rocchelli was a freelance photojournalist who had come to Donbas to cover the military conflict, with Andrei Mironov, a Russian human rights activist, as his interpreter.  Neither they, nor their French colleague William Roguelon, were wearing anything to identify them as journalists when their taxi came under fire at a railway crossing near Sloviansk, on 24 May 2014.

This was effectively a military zone at the time, which is something that the prosecution has stubbornly ignored, treating the death of Rocchelli as deliberate murder.

Markiv, a Ukrainian National Guard soldier, was positioned with other Ukrainian soldiers on Mount Karachun.  Without ever having visited the scene of the tragedy, the Italian prosecutor first asserted that Markiv had himself killed Rocchelli, but was forced to withdraw this charge since Markiv had not had any access to the mortar shells that killed the men.  He was instead accused of having provided information to the Ukrainian Army about the men’s whereabouts, in the knowledge that they were journalists. In the court’s justification of the conviction and 24-year sentence announced on 12 July 2019, it was claimed that Markiv  had helped to murder the foreign journalists in what they called an “ambush of the journalists”.   He had purportedly been able to see the ceramic factory Zeus Ceramica and the railway, near which Roccelli and Mironov were killed from his position on Mount Karachun.

Given these charges, it is clearly of critical importance to know whether Markiv could have seen  Rocchelli and Mironov.  It took the Ukrainian authorities far too long before they initiated the proper investigation, but it has now been carried out.

This established that there was a distance of 1,760 metres between Markiv’s position and the place where the journalists were killed. The distance and the fact that there were train carriages standing at the railway crossing, as well as trees, means that Markiv could not have seen the men or the taxi that they had arrived in.

The defence has also requested a ballistic test be made of the Kalashnikov rifle that Markiv had been issued with, since this does not have the optical enlarger to see at such a distance, as is claimed by the prosecutor.

It is hard to see how this could be dismissed as a value judgement, or how the obstructed view can be dismissed by the prosecutor as being because “vegetation” has had time to grow during the ensuing six years.

Markiv was arrested on 30 June 2017, when there was considerably less likelihood that the terrain had changed, yet the prosecution did not see fit to come to Ukraine and carry out the relevant tests.

The defence is not asking that the Ukrainian investigators’ findings, or those in the film be accepted as proof, only that the court orders the relevant Italian-run experiments and assessments to be carried out.

In convicting Markiv, and sentencing him to an incredible 24 years, the court essentially asserted that journalists had been targeted as journalists.  Markiv was supposed to have first used a Kalashnikov rifle, and then, when that couldn’t reach, to have informed the commander of the men’s coordinates for mortar fire.

All of this ignored absolutely critical evidence that there had been gunfire prior to the use of mortar fire and that this had come from the militants. It is important that the witnesses found either by the authors of the documentary The Wrong Place, or by the Ukrainian investigators, are questioned because they can confirm that there was shooting from below.  A local resident, for example, has confirmed that the shooting had begun from a militant stronghold on the territory of the Zeus Ceramics factory, near to where the journalists stopped.

The investigators also spoke with a witness identified only as Hlushkov, who took the injured Roguelon from the Zeus Ceramics factory to Sloviansk.  Hlushkov recounted that, as he drove away with the French journalist, the car came under fire from machine guns.  The investigators examined Hlushkov’s car and found damage caused by a machine gun (with a 5,45 mm. calibre) and say that it was fired from a small distance (which would indicate that it was the Russian / pro-Russian militants who had taken over the factory who were firing). .

Without having tried to find such witnesses and others, the prosecution instead denied that there had been shooting from the Russian / pro-Russian militant side.  Mironov’s last recorded words also contradicts this version. He can be heard of the video saying: “Somebody is sitting nearby and shooting and there are also mortar guns here”.

Roguelon’s testimony was also contradictory, but indirectly confirms the fact of shelling from both sides.  While back in 2014, he had acknowledged that he did not know where the initial gunfire had come from, during the trial of Markiv, in 2018, he asserted that the shelling had come from up the hill, and therefore from the Ukrainian army position.  He did, however, state that while he was in the trench, some people came down (who must have been the militants).  He shouted ‘journalists’ and they didn’t shoot.  He also spoke of the car that he was driven away in having been shot at, again something that confirms that there were two sides shooting.

There are many other disturbing aspects to this case, such as the reliance on a strange interpretation of an alleged telephone conversation as reported by Italian journalist Ilaria Morani, who was not herself a witness to the conversation. The prosecution treated this as Markiv’s admission of guilty, although it was nothing of the sort and in fact confirms that Markiv was warning journalists  that this was a dangerous war zone.

There is a startling reliance on material that originated from Russian propaganda media, and a very worrying similarity between this case and that of Nadiya Savchenko.  The latter was a Ukrainian military pilot seized by the Russian-controlled Luhansk militants, abducted to Russia and put on trial and sentenced to 22 years for supposedly informing Ukrainian soldiers of the whereabouts of two Russian journalists.

One of Markiv’s two defence lawyers, Donatella Rapetti accused the prosecution of having “manipulated” the fact that Markiv has Italian citizenship.  It is certainly difficult not to feel sceptical that the one Ukrainian soldier who, according to the prosecution, directly abetted Rocchelli’s ‘murder’ should have also been the one soldier on Mount Karachun to have Italian citizenship.  The latter made it easy to arrest the young man when he arrived in Italy to visit his mother.  It has also been used to enable the prosecution to consistently ignore the fact that Markiv was a serving soldier, obeying orders in a situation of war.