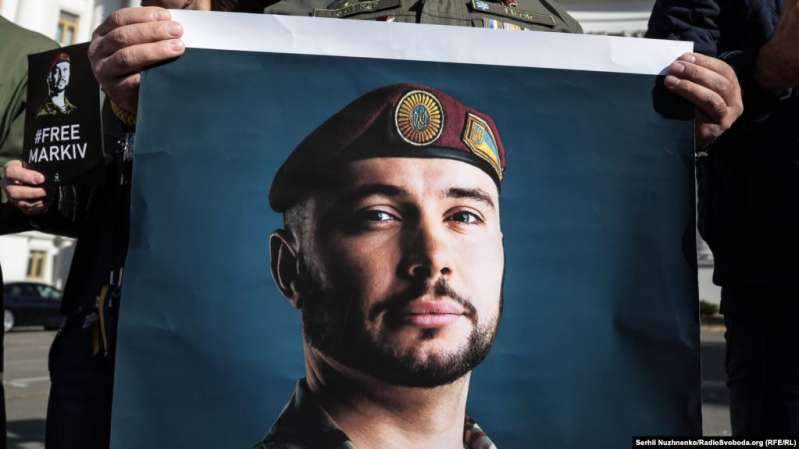 An international working group has published preliminary findings of its investigation into the death on 24 May 2014 near Sloviansk (Eastern Ukraine) of Italian photojournalist Andrea Rocchelli and his interpreter, Andrei Mironov, and into Italy’s trial of Ukrainian soldier Vitaly Markiv over Rocchelli’s death.  The independent investigation has highlighted such critical issues as the failure to consider the legal status of the military conflict in Donbas in May 2014 and legitimate doubts about much of the testimony which formed the grounds for the shocking 24-year sentence imposed on Markiv.  The publication of these results coincides with the appeal hearings now taking place against this sentence in the Milan Court of Appeal.

The working group was formed by members of the renowned Memorial Human Rights Centre in Russia and Ukrainian Centre for Civil Liberties.  They invited international lawyers from the French-based Centre de la protection internationale [CPI] to give their assessment of the course of Markiv’s trial.  While many of the concerns have already been mentioned here, they are now presented by human rights organizations of high repute and it is very much to be hoped that they will be given consideration by the Court in Milan.

31-year-old Andrea Rocchelli was a freelance photojournalist who had come to Donbas to cover the military conflict, with Andrei Mironov, a Russian human rights activist, as his interpreter.  Neither they, nor their French colleague William Roguelon, were wearing anything to identify them as journalists when their taxi came under fire at a railway crossing near Sloviansk, at around 18.00 on 24 May 2014.

There was effectively a war raging at the time, which the Italian prosecutor ignored, instead treating Rocchelli’s death as deliberate murder.

The investigators have analysed the circumstances around the tragic death of Rocchelli and Mironov, in view of norms of international law.  Since Italy has ratified all basic agreements on international humanitarian law, these norms should have been applied, yet were not. This is of particular importance in considering whether there was intent to hurt or kill civilians.

The investigators consider that the Italian justice system has not taken into account the legal status of the armed conflict in the East of Ukraine and was not guided by international treaties in classifying the actions of those involved in the case.  There is “selective and extremely inconsistent” reference to these actions in the case material.

The fact that Markiv was a member of a Ukrainian regular armed formation and therefore had functional immunity in foreign jurisdictions was not taken into account.  This functional immunity applies even, as in this case, where the accused has dual Ukrainian and Italian citizenship, and should at least have been considered by the court, the investigators say.

The international working group hopes to finish its analysis by the end of October, but from their study so far, they point to insufficient investigation of the facts and lack of clarity as to the method in analysing these. There are also doubts, they say, regarding the objectivity of the conclusions reached by the court, as well as with respect to the reliability of the testimony given by the main witness, Wiliam Roguelon.  They point to the emotional shock experienced by the latter and his possible lack of preparation for working in a zone of military action. Roguelon had, in court, mentioned several times that he had expected to die, and had also sent a message to colleagues saying that he was bleeding to death. In fact, he had received only light shrapnel wounds to his leg and was able to walk by himself.

Although of the three men, it was Mironov who had the greatest military and journalist experience, the court had clearly underestimated his role and had ignored his words in what proved to be a final video recording in which he said that they had been caught in crossfire.  The court had also failed to assess the presence and possible participation in this crossfire of members of armed formations under the leadership of ‘former’ Russian military intelligence officer, Igor Girkin (nom de guerre Strelkov)) who were present at the place where the men were killed.

The working group have analysed the coverage of the trial in the Italian media and believe that the negative public background could have adversely affected adherence to the presumption of innocence.

a general ‘presumption of guilt’, with a large number of the publications haven’t stated that “Rocchelli’s killer” had been detained;

frequent use of cliché’s; stereotypes and wrong assessments regarding Markiv, Ukraine and Ukrainians, for example, linking Markiv or Ukrainians in general with the far right;; inaccurate statements about Markiv (for example, that he was in command of a unit) or about Ukraine (claims that the far right are widely represented in Ukraine’s parliament);

a lack of balance in the presentation of the positions of the two sides of the trial with Markiv; his defence lawyers and those representing Ukraine in the absolute majority of cases having not been given a chance to speak and with their position not considered. “On the contrary, the efforts of the defence are viewed as attempts to obstruct the exercising of justice”.

All members of the working group are working pro bono and stress that they see their work as extremely important for affirming the principle of justice in this case and in memory of photojournalist Andrea Rocchelli and their colleague, human rights defender Andrei Mironov.

Further details about the charges and trial

Markiv, a Ukrainian National Guard soldier, was at the time of the tragedy positioned with other Ukrainian soldiers on Mount Karachun.  Without ever having visited the scene of the tragedy, the Italian prosecutor first asserted that Markiv had himself ‘murdered’ Rocchelli, but was forced to withdraw this charge since Markiv had not had any access to the mortar shells that killed the men.  He was instead accused of having provided information to the Ukrainian Army about the men’s whereabouts, in the knowledge that they were journalists.

Among multiple concerns in this case was the fact that the man accused of this crime should have been the only Ukrainian soldier who also had Italian citizenship and a mother living in Italy. It was when he arrived in Italy to visit his mother on 30 June 2017 that Markiv was arrested.

The charges appear to be based solely on the contradictory testimony given by Roguelot, and on a dangerously free interpretation of a telephone conversation between Markiv and a journalist, then reported by another journalist Ilaria Morani, who was not herself a witness to the conversation in the media.  The prosecution very strangely presented this as being Markiv’s ‘admission of guilt’, although the latter was in fact warning that this was a war zone which journalists should not enter.

In the Pavia Court’s justification of the conviction and 24-year sentence announced on 12 July 2019,  it was claimed that Markiv  had helped to murder the foreign journalists in what they called an “ambush of the journalists”.  He had purportedly been able to see the ceramic factory Zeus Ceramica and the railway, near which Roccelli and Mironov were killed from his position on Mount Karachun.

In fact, there was a distance of 1,760 metres between Markiv’s position and the place where the journalists were killed. The distance and the fact that there were train carriages standing at the railway crossing, as well as trees, means that Markiv could not have seen the men or the taxi that they had arrived in.  The prosecutor claimed that Markiv’s Kalashnikov had an optical enlarger.  It does not, and this can easily be checked. Among applications from the defence on the first day of the appeal hearing, was a request for all such forensic assessments, investigative tests, etc. to be carried out since these totally absolve Markiv of any possible involvement in this supposed ‘targeting of journalists’.

All of this ignored absolutely critical evidence that there had been gunfire prior to the use of mortar fire and that this had come from the militants.  As mentioned, the most poignant confirmation of this came from Mironov himself.  He can be heard of the video saying: “Somebody is sitting nearby and shooting and there are also mortar guns here”. There are also other witnesses, including some found by the authors of the documentary The Wrong Place, whom the prosecution made no effort to find and question. At least two of these witnesses have confirmed that there was shooting from below.  A local resident, for example, says that the shooting had begun from a militant stronghold on the territory of the Zeus Ceramics factory, near to where the journalists stopped. Another witness, identified only as Hlushkov, took the injured Roguelon from the Zeus Ceramics factory to Sloviansk.  Hlushkov recounted that, as he drove away with the French journalist, the car came under fire from machine guns.  Ukrainian nvestigators examined Hlushkov’s car and found damage caused by a machine gun (with a 5,45 mm. calibre) and say that it was fired from a small distance (which would indicate that it was the Russian / pro-Russian militants who had taken over the factory who were firing). Roguelon’s testimony was also contradictory, but indirectly confirms the fact of shelling from both sides.  While back in 2014, he had acknowledged that he did not know where the initial gunfire had come from, during the trial of Markiv, in 2018, he asserted that the shelling had come from up the hill, and therefore from the Ukrainian army position.  He did, however, state that while he was in the trench, some people came down (who must have been the militants).  He shouted ‘journalists’ and they didn’t shoot.  He also spoke of the car that he was driven away in having been shot at, again something that confirms that there were two sides shooting.

The lack of objectivity noted by the working group was hardly surprising given the strange reliance in this case on propaganda sources. Even the New York Times reported in December 2019 that “it raised eyebrows when the court released its reasoning in the fall showing that among the evidence presented by Italian prosecutors were reports from publications that are generally considered outlets for Russian propaganda.”

What makes this use of Russian propaganda sources even more disturbing is the similarity between the charges against Markiv and those brought by Russia against Ukrainian military pilot Nadiya Savchenko after she was first captured by Russian-controlled Luhansk militants and then abducted to Russia.

In both cases, journalists were caught up in situations where two warring sides were engaged in active combat, yet it was claimed that one side had deliberately targeted the men as civilians.  Indeed, in the Italian case, there is positive denial that one side (the Russian / pro-Russian militants) was shooting. There was plenty of objective evidence demonstrating that Savchenko and Markiv could not have spotted the journalists and recognized them as such, yet this was ignored.

Savchenko was sentenced to 22 years’, but then later released in exchange for two Russian military intelligence officers captured while killing a Ukrainian solder in the Luhansk oblast.

The next hearing in Milan is on 8 September .