Tortured and jailed or killed for the Ukrainian Flag and for supporting Ukraine in occupied DonbasWhy expel Russians ‘planning crimes for the Kremlin’ when Russia holds so many Ukrainian political prisoners?Prisoner exchange leaves most Donbas hostages in captivity and makes journalists suspiciousDesperate plea to Zelensky from relatives of hostages once again forgottenRussian-controlled Donbas militants finally free severely disabled pensioner but not her invalid sonRussian Media hype over ban on parliamentary communist faction [Updated]Russian media claims ‘genocide’ in Semenivka [Donbas]Магія слова. Одкровення для засобів масової [дез]інформаціїЗакон про мов[чання] в УкраїніCrimean Tatars restart work at the site planned for a Soborna [Assembly] Mosque in Simferopol80% of those held in SIZO [remand centres] have confessions beaten out of themTemnyky [directions on what to cover and how] in the Russian media to Moroz’ taste?“Vechirny Kyiv” [“Evening Kyiv”] may be at threat of closure over the conflict with ChernovetskyPsychological pressure on “Vechirny Kyiv” [“Evening Kyiv”] was apparently not enough.Pre-trial detention centres [SIZO] in Ukraine and how they comply with international norms“The Summit’s echo: has the liquidation of human rights organizations in Russia begun?” [Attack on the “International Protection Centre”]Moscow: public protest achieves its aimOpen letter from the Kharkiv Human Rights Group regarding the threat posed by the “political reform”Коментар до проекту Кримінально-процесуального кодексу України [1][ СТОРІНКА ЗАРАЗ У СТАДІЇ РОЗРОБКИ ]
• Topics / The right to life 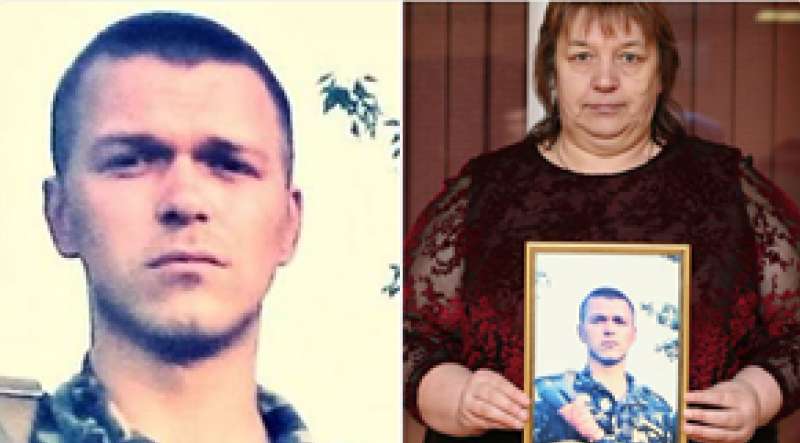 Yadviha Lozynska has been waiting for her only son, Andriy, to return home since August 2014 when he disappeared while in action near Ilovaisk. She spoke with him once after he disappeared and is convinced that he is still alive.  Lozynska has worked tirelessly over the last six years to find out where her son is and to help other families like hers to find the sons or fathers who disappeared without trace in Donbas.  In 2019, the ‘Hope’ Association of Relatives of Those Missing united 50 such families.

Andriy Lozynsky had only been at home for 8 months after doing his military service when, in April 2014, he received a call-up notice. He turned 22 shortly afterwards, on 24 April.

His mother explains that, on 19 August 2014, after three short days of leave, Andriy was sent to Donbas, to Ilovaisk.

It was during those fatal weeks in August that Russia began almost openly deploying its own military personnel and heavy artillery, on a scale that the Ukrainian Armed Forces could not defeat.  For several days, Ukrainian forces were under siege in Ilovaisk, with the situation catastrophic.  In the early hours of 29 August, Russian President Vladimir Putin issued his so-called ‘Appeal to the insurgents of Novorossiya’ in which he ‘called on the Russian soldiers and Russian-controlled militants to open  humanitarian corridor for Ukrainian soldiers to leave the military zone. The resulting agreement was a trick and the vehicles  immediately came under attack with the use of mortar fire and heavy ammunition.  A huge number of Ukrainian soldiers were killed or taken prisoner.

Andriy last phoned his mother from his own phone on 28 August. On the following day, his unit was supposed to have moved towards the village of Mnohopolye, near Ilovaisk. His mother had arranged that Andriy would phone her or at least send a text message every day. By 30 August, having not heard from him, she set off in search, and began the long process of asking soldiers and, later, former POWs if they had seen him. Several people told her that he had been shot and killed when they were taken prisoner.  She has always refused to believe this, and says that those people were driving in different vehicles and Andriy could not have been with them.

Lozynska set off with a woman friend to occupied Donetsk and from where they travelled around all the areas where fighting had taken place, trying to find out what had happened to her son.

A person from the occupation administration in Starobeshevo told her that all POWs had been taken to Donetsk, to the SBU [Ukrainian Security Service] building which the militants had seized.

Later, Lozynska says, she learned that her son had been taken to the so-called ‘Luhansk people’s republic’ and had been imprisoned in prison colony No. 38 in the city of Dolzhansk.  She was even able to recognize him on a photo of those taken captive, and says that Andriy phoned her from somebody else’s telephone on 5 September.  She has tried to get the prosecutor’s office to establish where the call was from but to no avail.

She says that the last person who saw Andriy in captivity was freed at the beginning of November, 2014.  She knows, therefore, that he was alive then, but has heard nothing since.

She was, however, shown an exchange list on 17 December 2014, and saw her son’s name on it.  She believes he was supposed to have been released on 26 December that year, but for some reason was not.

More recently, the SBU have told her that they believe that her son was killed and say that his DNA closely matches that of the body of a soldier now buried near Zaporizhye.  She is adamant that the grave exhumed contains the remains of more than one person but that they don’t correspond in height and general size of her son who was tall and of large build.  She remains convinced that Andriy is alive.

Oleh Kotenko is the head of the ‘Patriot Group’ which is seeking to find and secure the release of those missing and / or taken prisoner. He told Radio Svoboda’s Donbas Realii  that as long as the militants refuse to allow volunteers into occupied territory, it is essentially impossible to ascertain with certainty what happened to many of those who are missing.  He cannot exclude the possibility that some of the people, perhaps because of injuries, have lost their memory.  It is also possible that some prisoners may have been taken to Russia. 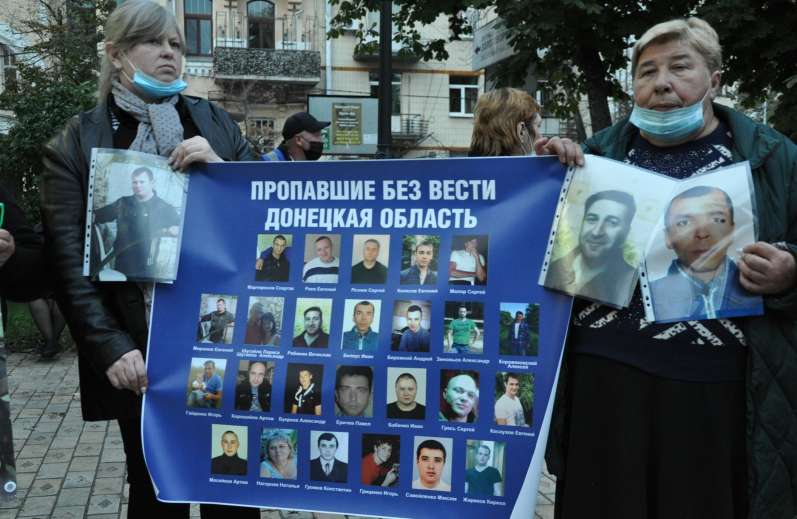 Those who disappeared without trace while defending Ukraine in the Donetsk oblast.  On 10 October 2020 during the Нагадай про кожного - Remember each person procession in Kyiv

On 10 October, hundreds of Ukrainians, including the family members of many of the missing, of the hundreds of civilian hostages and POWs imprisoned in Donbas, and of political prisoners held in occupied Crimea or Russia took part in demonstrations in at least 15 Ukrainian cities under the banner ‘#Not_Forgotten [literally: ‘Recall each person’ or #Нагадай_про_кожного]  All participants demanded that a law on supporting hostages and political prisoners, as well as the law on war crimes, which recently passed through its first reading, finally be passed and implemented.  They called on Ukraine’s leaders to intensify efforts to secure the release of political prisoners held in Crimea and Russia, as well as the POWs and hostages held in occupied Donbas.

The families of the missing demanded that the Cabinet of Ministers commission on those missing without trace, which has not met since 2016,  resume its work with the participation of members of the men’s families. 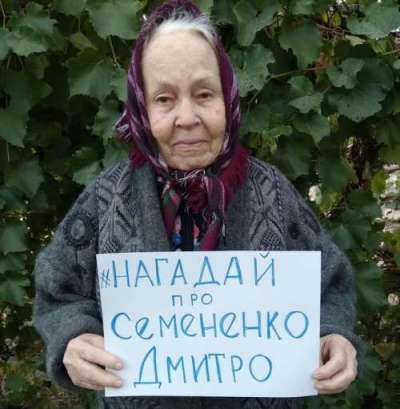 The mother of Dmytro Semenenko, from Lviv, who disappeared on 5 September 2014, during a fierce battle near Vesela Hora in the Luhansk oblast 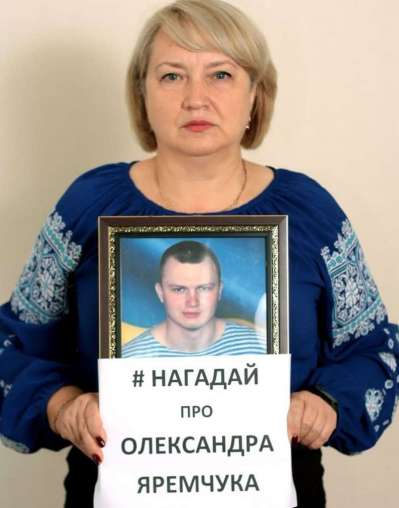 The mother of Oleksandr Yaremchuk, a soldier from the Third Special Forces Regiment, who has been missing since the summer of 2014 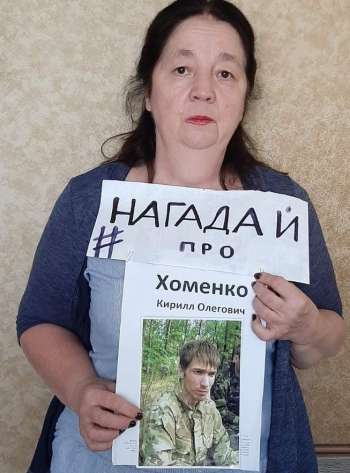 Kirill Khomenko, from the Kryvbas Battalion, disappeared in the summer of 2014.  As well as his mother (on the photo), he has a wife and small son 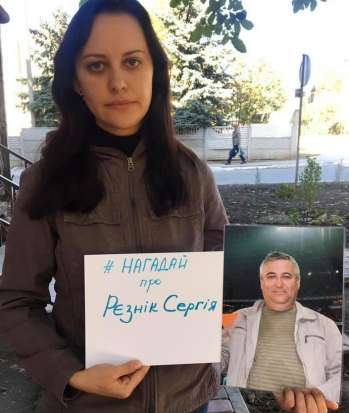 Serhiy Reznik was returning home to a village near Piski in the Donetsk oblast in September 2014.  He was stopped at a checkpoint at Karlivka and nothing has since been heard of him.  His daughter is holding the photo