Russian occupiers fake statistics about deaths from Covid-19 in Crimea 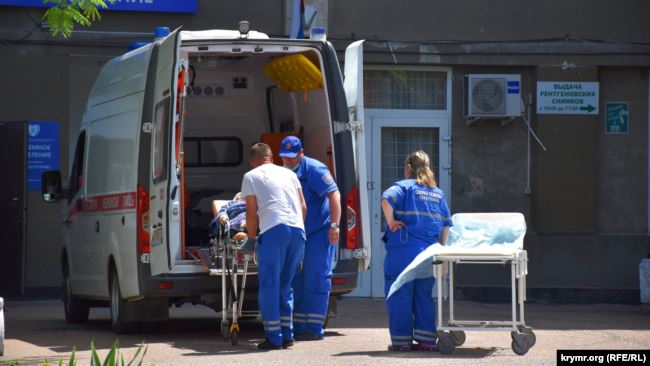 The Crimean Human Rights Group [CHRG] has learned from different sources that the Russian occupation authorities are forcing medical staff and morgues to lie about the real number of deaths from Covid-19 in occupied Crimea.  This is of particular concern as all kinds of public events are taking place as though there were no pandemic, as well as active measures to encourage Russian tourists to visit the occupied peninsula.

A person working in a Crimean morgue has told the CHRG that they see one or two people each day who died from Covid-19, but whose death certificate gives another cause of death.  A medical worker from a hospital in a different city has confirmed that the statistics are being rigged.  He explains that the number of patients dying is steadily rising, however accompanying illnesses are given as the cause of death, with Covid-19 not mentioned.

CHRG has long reported that the occupation regime is systematically underestimating the number of deaths from Covid-19, and says that it has gathered evidence of this.  From 30 April (when the first deaths were reported) to 7 June there was initially a report on Russian-controlled sites of 31 coronavirus deaths in occupied Crimea, excluding Sevastopol.  On 8 June, however, Igor Chemodanov from the so-called Crimean health ministry, announced that the system for recording deaths from the coronavirus infection had been changed.  What this ‘change’ boiled down to was a sharp reduction in the number of reported deaths, from 31 to 12, with such fiddling of the statistics having continued since then.

On 7 October, the head of the ‘Russian health ministry in Crimea’, Alexander Ostapenko reported an increase in Crimea in the number of cases of community-acquired pneumonia.  He said that over the last week, 564 people had been hospitalized as a result, with 440 “with grave or extremely grave forms of community-acquired pneumonia”.  Although the Kremlin-loyal website mentions the number of Covid-19 cases at the end of its report, Ostapenko does not appear to have used the word at all.  It seems likely that the statistics for any resulting deaths will also avoid mention of Covid-19, although it is hard to imagine that such a dramatic increase in pneumonia cases is not directly linked with the pandemic..

CHRG considers that shenanigans with coronavirus fatality statistics are yet another example of Russia’s failure to comply with its international obligation to protect the population of occupied Crimea from the pandemic.  It is therefore proposing that the UN General Assembly, in its 2020 Resolution on the situation with human rights in the Autonomous Republic of Crimea and the city of Sevastopol, adds a clause expressing grave concern at the lack of effective measures to prevent the spread of Covid-19; at the fact that the occupation authorities are continuing to organize public events and are allowing Russian citizens to enter occupied Crimea; and at the failure to take measures to prevent the spread of Covid-19 in Crimean prisons and pre-trial detention centres (SIZO).

It was reported at the beginning of October that the Russian occupation regime are allocating 1.2 million roubles for a ‘press tour’ aimed at taking Russian journalists around Crimea and giving them a good time so that they encourage more Russians to spend holidays in illegally annexed Crimea.  Not only are such tourists likely to further spread the virus, but mass events are planned during the propaganda press tour.  Iryna Sedova, a journalist and member of CHRG, points to the immense danger of such propaganda during a pandemic.  Instead of taking measures to protect the population, they are concentrating on developing the tourist industry by encouraging people to ignore the danger from coronavirus altogether.