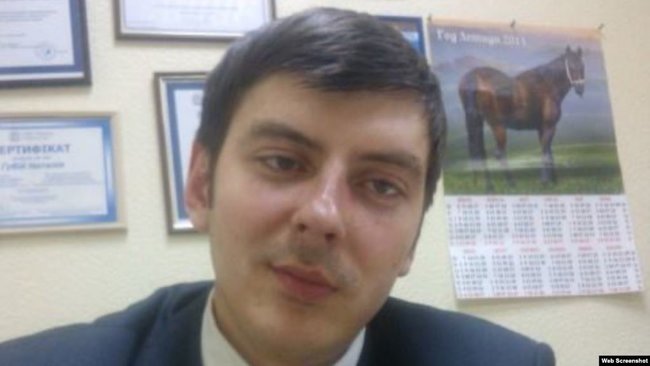 34-year-old Vasyl Horobets served in the Ukrainian Armed Forces from 2015-16, defending his country in Donbas.  Two years later, he was seized by the Russian-controlled militants of the self-proclaimed ‘Donetsk people’s republic’ [DPR] and sentenced to 16 years for that service to Ukraine.

The charges laid against Horobets are grotesquely cynical.  He was accused of ‘undertaking training aimed at carrying out terrorist activities’ and ‘planning a violent seizure of power’.  These corresponded to Articles 232 and 323 of the unrecognized ‘republic’s’ so-called criminal code, and reflected only the militants’ gross distortion of Horobet’s defence of his country.  They claimed that through his military training and service in the 40th Artillery Brigade, he had “carried out deliberate actions aimed at the seizure and overthrow of the DPR legitimate authorities”.  Worth pointing out that even Russia, which finances, arms and controls this unlawful military formation, has not formally recognized it as a ‘republic’.

There is nothing to suggest that Horobets enjoyed any of the attributes of a fair trial, or even whether the 16-year sentence, passed by the so-called ‘DPR supreme court’ on 2 October 2018, was the appeal stage, or a first and only sentence.  It is asserted that the sentence has come into force.

Horobets had been demobilized in 2016, so is not formally a prisoner of war.  Although journalist Stanislav Aseyev, who was released in the December 2019 exchange, has been able to confirm to Horobets’ mother, Valentina, that her son is alive and well in the 32nd prison colony in Makiyivka, the militants themselves are refusing to confirm his imprisonment and are not adding him to the hostage exchange list.

Horobets is from Donetsk and worked as a car mechanic.  He and his mother left in 2014 after the Russian and Russian-controlled militants seized control of what they now call ‘DPR’, and settled in the Cherkasy oblast.  He was called up in 2015 and served at the front until 2016.

Unfortunately, he met and fell in love with a woman from Donetsk and, despite his mother’s pleas, returned to Donetsk, where the couple lived in the house the family had left behind.

He was seized quite a bit later, on 18 April 2018.  Individuals from the so-called ‘DPR ministry of state security’ took him from his home, accusing him of organizing acts of sabotage and working for Ukraine.

He had undoubtedly worked for Ukraine, but at the front, and in fact the militants appear to have later concentrated only on his military service in the ‘charges’ they used to impose a 16-year sentence.  His mother notes that this was all strangely fast-track, with such ‘trials’ normally dragged out over years. In his case, they ‘sentenced’ him without a few months.

Vasyl has only once been able to speak with his mother, and was given only as long as it took him to say ‘Hello, Mama’.